While the media and press in France play down the severity and urgency of the French insurgency, the UK’s Foreign Office warns travelers to France of the risk thus:

Serious and violent disturbances, during which buildings and vehicles have been set on fire and missiles, including stones, petrol bombs and tear gas canisters thrown, continue to affect several Paris suburbs and a large number of other towns and cities throughout mainland France. 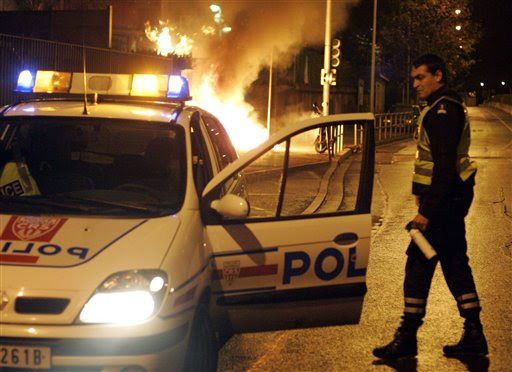 In Paris, the violence has mainly affected the Seine-Saint-Denis area in the north east of the city but disturbances have also occurred other areas including the Val d’Oise, Yvelines, Hauts-de-Seine, Seine-et-Marne, Val-de-Marne, Essone, Evreux and Aulnay-sous-Bois. In one of the most serious incidents to date, shots, believed to have come from shotguns, were fired at police in the town of Grigny, south of Paris, injuring two policemen. If you need to visit or transit any of the affected areas you are advised to be extremely vigilant and to avoid any demonstrations which may be taking place in and around the area. You should also be aware that in the present circumstances disturbances could occur almost anywhere.

The Telegraph (UK) further describes the state of decay indicating a functional collapse of civil authority in many areas altogether:

France was struggling to overcome one of its gravest post-war crises last night as every major city faced the threat of fierce rioting that began 12 nights ago and now seems to have spun out of control.

A country in flames… French cities teeter on the edge of anarchy:

Gangs of youths were once again on the rampage across France last night as the guerilla warfare, which has engulfed a string of Paris suburbs for more than a week, took hold in cities throughout the country.

Despite a string of emergency meetings and the drafting of 1,500 members of the CRS riot squads into the Paris suburbs, police and politicians have failed to control the worst violence the city has experienced since the riots of May 1968.

In the early hours of yesterday, gangs of youths threw blazing rubbish bins across the streets and set fire to cars, many of which belonged to their own neighbours.

The acrid smell of burning rubber and refuse filled the air and plumes of flames shot skywards, their orange glow illuminating the grim high-rise blocks, which have become France's 21st century ghettos.

Some of the worst violence is being reported in Toulouse.
Posted by Joe at 10:07