The Economic of the Greek neo-com party, The SYRIZA Unionist Socialist Front, in a CNBC interview with the charming and talented Maria Caruso-Cabrera, cited the old lunatics and selfish brats of 0ccupy Wall Street as intellectual kinsmen. You’ll note the stock footage of the crowd features energetic waving of flags bearing hammer-and-sickle themes to a few of the parties in their coalition. 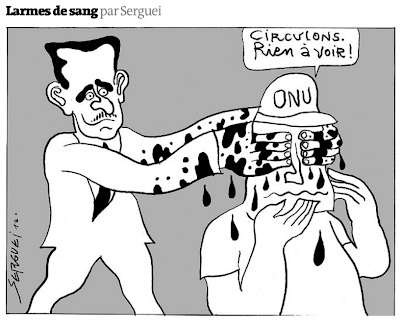 Serguei's take on the UN:

The United Nations: quite a different creature than the "principled" one in the days of the Bush administration giving Dubya lessons on all the "horrors" perpetrated by his Washington administration…
Posted by Erik at 15:14 No comments:

Chirac's Dissing of Eastern Europe During the Iraq War: The Poles Haven't Forgotten

to that of its fellow Euro 2012 organizer), Tomasz Orlowski, Warsaw's ambassador to Paris felt the need to respond, doing so with a tad of sarcasm, and ending his column against (what he considered) a trio of arrogant Frenchmen by a reference to the immortal words of Jacques Chirac's (in)famous retort to Poland's and Eastern Europe's principled public siding with George W Bush during the Iraq war:

Portrait of One of Syria's Useful Idiots: Belgian Praised Régime Until Assad Threw Him into a Dungeon

All dictatorships have their useful idiots and Pierre Piccinin served the Bashar Ba'athist régime.

Thus starts Christophe Ayad's article in Le Monde (which is followed by another, shorter article on the galaxie hétéroclite of supports to the Bachar Al-Assad régime, many of them (like Thierry Meyssan) — quelle surprise ! — anti-American and anti-Israeli).

Until he was was no longer useful and he was sent to a dungeon to meditate on the ingratitude of dictators in general and that of Bashar Al-Assad in particular.

In the meantime, Pierre Piccinin, a 39-year-old teacher from Belgium that Le Monde refers to sarcastically as "Tintin" and as a "contemporary Saint Thomas", had crossed Syria despite the revolution, "without understanding anything but believing he was seeing clearly", defending the régime "beyond the reasonable", seeing only a peaceful country, only rare demonstrations, and only soldiers who didn't use their weapons.

It ended with his spending a week in Syria's dungeons, being beaten, being tortured with electric shocks, and being forced to "witness the agony of poor devils tortured horrendously" — before being expelled.

The answer is more Europe not less....

Why Civilization is Doomed

Because among the leisure class there are people who want to dismantle modernity, and risk starting trade wars over things that only matter to their moral vanity.

I say take away their iPads and see how long they last.
Posted by Joe at 18:16

As the AFP reports that Mohamed Merah felt betrayed by his best friend,

a fellow Jihadist who turned out to be "working for the French secret services" ("Go to Hell, you traitor!" the Islamist assassin says in a videotape, "I will never forgive you!"); and as Reuters and the BBC report that the

father of Mohamed Merah, the Islamist gunman killed by French police after shooting seven people, has formally sued over his son's "murder";

Le Monde's Emeline Cazi has a double spread article on a terrorist's childhood.

All the documents [in the Merah case] tell the story of a family and witness to the climate of violence and the lack of love in which the scooter killer grew up. … But the family environment does not explain everything. Nor do the decaying neighborhoods of Toulouse. For the story of Mohamed Merah is also that of a kid's eternal search who never managed to find his bearings.

"He hit me, bit me, emptied the contents of the fridge on the floor, broke everything" admits the mother to a courthouse psychologist. "I cannot speak to him severely, otherwise he runs away or insults me in front of everybody, and I feel ashamed."

One morning, Zoulikha Aziri arrives with wounds to the face and bites on her arms: her son has beat her all night long.

This was two weeks after she had been hit with a broom and had rocks thrown in her face.

Mohamed's father goes to jail for drug dealing, a sister attempts suicide, Mohamed attempts suicide, brother 'Kader stabs an elder brother (who falls into a coma), Mohamed complains of "a life of shit" (une "vie de merde"), Mohamed is sentenced to jail, one might think that it is As the World Turns.

And then, of course, Mohamed meets extremists in prison, converts to Islam, and emerges as Abu Yusuf, going on to marry a 17-year-old Hizia, but not before traveling to Baghdad, to join Al Qaeda.
Posted by Erik at 17:14 No comments:

Francois Hollande, the man who wants to be France's "Mr Normal" president, has stopped going to work by scooter but tells voters he will still take the train and do the family shopping once elected - at least, he jokes, "if the fridge is empty".

This HAD to be done to heal the earth and save the world fromM. Le Président Bling-Bling, Nicolas Sarkozy, who in their view was Fiddy and Snoop-Dogg incarnate, despite his socially regretable palorous hide.

Further, his main squeeze, not the very Ségolène Royal, without who the world wouldn’t have 4 little Hollandes, Valérie Trierweiler was said to be shy, retiring in her not having been elected, and “normal”.

His partner Valerie Trierweiler also wants to stick to a simple life. She relishes the already too-rare moments when the two share dinner on the sofa in front of the television, even if, she says, he tends to use too much butter in his cooking.

She says she will happily play "second fiddle as first lady" but she wants to remain a working mum, in part to pay for the upkeep of three teenage sons that the twice-divorced journalist had before moving in with Hollande

Again, lots of domestic imagery there that you know neither of them are really capable of.

So what does one get from what we are supposed to comfortably accept as a ‘comfort woman’ typical to French politics? One we are supposed to be proud of in their coat-tail riding capacity? Lucy once again pulls back the football, and we have Socialists as they really are: catty, infantile, and barely smart enough to be self-absorbed.

Ségolène Royal, former partner to French President Francois Hollande, has been attacked by his new companion Valérie Trierweiler (pictured) who has tweeted her support for Royal’s opponent in Sunday’s parliamentary elections.

French President François Hollande’s girlfriend Valérie Trierweiler announced her support for a political opponent of his ex-partner Ségolène Royal on Tuesday, a move that will embarrass Royal as her political career hangs in the balance.

In a tweet, Trierweiler praised Olivier Falorni, who is running against Royal for the La Rochelle constituency in Sunday’s second round of the parliamentary elections.

“Good luck to Olivier Falorni who is a worthy candidate,” the Paris Match journalist wrote. “For years he has been fighting with selfless commitment for the people of La Rochelle.”

As Bloomberg's Marcus Bensasson reports, citing Kathimerini, the Greek banking system has continued to hemorrhage deposits this month, amid uncertainty over the outcome of elections on June 17. "Many people are putting money in shares of mutual funds denominated in dollars because of the bureaucratic difficulty of taking money out of Greece, or are keeping cash at home, the newspaper said." How much? "Deposits are leaving the banking system at a rate of 100 million to 500 million euros ($125 million to $625 million) a day, Kathimerini said, without specifying over how long a period that rate of outflow has continued."
Considering that the Greece banking system has about €170 billion in total deposits, this is roughly 0.3% of the entire deposit base fleeing each day - those who understand the nuances of fractional reserve banking get why this could be an issue.
Putting this in the US context, which has over $8 trillion in various forms of deposits, this would be equivalents to about $25 billion getting withdrawn. Every day.


Some serious news from Greece - banks are seeing customers withdraw money at an increasingly rapid pace ahead of Sunday's elections.
Senior bankers told Reuters thay daily deposit outflows from the country's biggest banks have been between €500m and €800m over the past few days, with the pace accelerating yesterday.
Posted by Georges at 13:05

The French Finance Minister believes Italy is a “solid economy” with “strong fundamentals”. Pierre Moscovici was asked whether the eurozone focus will turn to the country following the Spanish bailout.
He added that the bailout is "decisive" and "convincing". Moscovici said that estimates of a €100bn bailout are too high, and the next few weeks will be "very important" for the future of the euro.
Ah well, why didn't you say so earlier? That's me convinced.....
Posted by Georges at 11:06

Euro-Polity in a Time of Need for Mutual Assistance

"HOPE TURNS TOWARDS THE KANGAROO" reads a subhead in bold caps in Catherine Vincent's (quite serious) Le Monde article. With regards to global warming, and to the nefarious impact upon the Earth's atmosphere by the flatulence of cows and other ruminants, "will the kangaroo's stomach microbes one day lead to the cleaning-up of the atmosphere?"

Livestock is the cause of 35% of world emissions of methane, writes Catherine Vincent in the "Planet" section article that apparently she cannot see belongs in Mad Magazine's You Can't Make This Stuff Up department (although the Le Monde cartoonist can, with 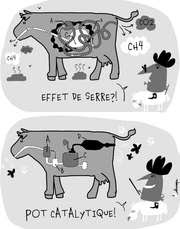 Among the "main problems" discussed at the 19th World Meat Congress in Paris, we learn, "experts" (the tongue-in-cheek quotation marks are my own) have decided to "act on the ruminants' digestion process."

Indeed, it turns out that the "kangaroo farts and belches like everybody else, but that its gaseous emanations contain no methane." Since "therein likes the difference with the flatulence of ruminant animals", researchers in global warming want to study the marsupial herbivore, specifically things like the bacteria in its stomach.

Thanks to genetic studies, they hope to discover a vaccine, sometime between 2015 and 2020, that would prevent ruminants from generating methane.