A Promise of Paradise — by Selçuk 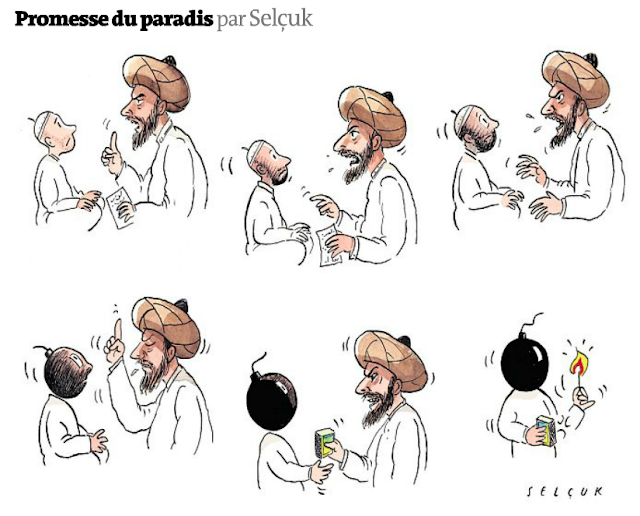 The Rotherham sex ring isn’t even the first example of authorities brushing pedophilia under the rug because the perps belonged to a well-organized, militant minority

When an anonymous researcher in Rotherham, England submitted a report thirteen years ago concerning a group of Pakistani men who were sexually abusing local girls she didn’t expect to face disciplinary action.

Benny Huang points out that the Rotherham scandal is not an isolated incident — far from it.

Her report was poorly received by the Rotherham Council which proceeded to launch a hasty coverup. Its members were so fearful that they would be accused of bias against racial and religious minorities that they turned a blind eye to the child-rape bonanza occurring under their noses.

… Fortunately, the coverup appears to be over. Authorities are now admitting that a major sex slavery ring was operating across northern England between 1997 and 2013. A conservative estimate of the number of victims is about 1,400. One wonders how many of those victims might have been allowed to keep their innocence if someone in Rotherham had taken action in 2001 when the anonymous researcher first submitted her report. We’ll never know.


It takes a special kind of coward to allow kiddie-diddlers to run amok for fear of being called a bigot. Or does it? Covering for child molesters is getting to be rather routine in Britain. The Rotherham sex ring isn’t even the first example I’ve read of authorities brushing pedophilia under the rug because the perps belonged to a well-organized, militant minority. In at least two other situations, repeated credible accusations of child abuse against male homosexuals were ignored because the officials feared being perceived as “homophobic.”

Craig Faunch and Ian Wathey of Wakefield, England served as foster parents to eighteen children in 2003 and 2004. The two men sexually abused at least four of them. The fact that they requested troubled boys didn’t seem to send up any red flags. A report released in 2007 indicated that the two pervy child rapists were considered “trophy carers” because of their sexuality and that social workers went out of their way to show how accepting they were of same-sex foster parents. “It was clear that a number of staff were afraid of being thought homophobic,” said the report. “The fear of being discriminatory led them to fail to discriminate between the appropriate and the abusive.”

Child sexual abuse on a larger scale infested the Islington section of central London in the 1970s and 1980s. Again, the perpetrators were “gay” men, and again the crimes were covered up for precisely that reason. One survivor was Demetrious Panton who is now a forty-seven year old lawyer. According to the Daily Mail: “[Panton] was targeted by a now notorious paedophile ring, whose members at some point ran every one of the council’s twelve care homes. For more than a decade, the group was able to prey on children with virtual impunity, convincing Labour-run Islington’s political elite that anyone who attempted to blow the whistle on their crimes was motivated by homophobia.”

… Some might argue that “straights” sometimes rape kids too. They would be right, of course, though proportionately speaking there’s simply no comparison—male homosexuals commit an absurdly large percentage of sex crimes against minors. Even so, the “straights do it too” argument fails for another, more important reason—no one ignores credible accusations of sexual abuse out of fear of being called a “heterophobe.” People aren’t trained to self-censor their words, and even their thoughts, when heterosexual men are preying on underage girls. Not unless those men happen to belong another protected group such as Pakistani Muslims.


That’s just the reality of Britain today and we’re probably not much better. Their society suffers from a surplus of cowardly authority figures who won’t lift a finger to protect children if it means that someone might call them a mean name. What spawned this kind of gutless pusillanimity?

… Members of the cultural elite have created a taboo against criticizing members of groups they deem to be oppressed. The very same cultural elite serves as defenders and enforcers of that taboo, making sure that anyone who defies them pays a steep price. Like dogs who are taught via electrical shock not to stray from their kennels, ordinary people learn to keep mum about things they know aren’t right, even it means acting as an accomplice after the fact by concealing the truth.