We "will commentate on current events with all the psychotic calm and serenity of a Palestinian father who explains that he can't wait for his 2 surviving sons to become martyrs": No Pasarán Celebrates 10th Anniversary Today!

Ten years ago, after enduring months of unceasing tirades of criticism and venom from Europe (and especially France) linked to George W Bush's 2003 invasion of Saddam Hussein's Iraq, a handful of independent bloggers (Douglas, Jonathan, and Liminal aka U*2) made good on their vow to unite their efforts and create a single, common weblog, one by the name of No Pasarán! (I would join five weeks later, and N Joe a year or two later.)

Below are the first two days of No Pasarán!

Le Monde's website is advertising a "lexicon for better understanding the United States" on the right-hand side of its front page. Although you have to pay in order to access the dictionary that contains over 400 "words of America," the advertisement is telling. If you click on the ad, a slide show opens with the following definitions:

It's comforting to know that Le Monde is doing its part to break down misunderstandings and stereotypes between French and Americans. Now we just need Conan O'Brien to come up with a dictionary for Americans to understand France.
Posted by Jonathan at 15:04

Last month, the ship, Bugaled Breizh, sunk off of southern England. Five Frenchmen died. The culprit was allegedly a Philippine-registered vessel called the Seattle Trader, which may have collided with the Bugaled Breizh. Although the UN Convention on the Law of the Sea indicates that vessels are under the jurisdiction of the country in which they are registered and therefore any action with respect to the Seattle Trader should be authorized by the Philippine government, France is bringing justice to the alleged culprits and is hunting them down. Philippine President Gloria Macapagal-Arroyo has denounced France's actions as "gun-boat diplomacy."
Posted by Jonathan at 14:52

Three years after the Convention was created, France has ratified the Stockholm Convention on Persistent Organic Pollutants, which restricts production of certain pesticides, industrial chemicals and unintended byproducts of combustion such as DDT, PCBs and dioxin. France was the fiftieth country to ratify the Convention, and "fifty" was the number required for the Convention to enter into force.

The United States is a signatory to the treaty, and President Bush submitted the Convention for ratification to the Senate back in 2002.
Posted by Jonathan at 14:37

And here is the second day of the blog:


We have no bananas to-day!

Let's check in on our friend Dieudonné. Where do we find his career?

The stunt he pulled seems to be costing him dearly, according to Le Monde. The paper writes that the show he was supposed to have yesterday at L'Olympia was canceled. The venue's directors issued a press release stating that, after receiving anonymous threats, they were canceling the show due to the "climate of extreme tension we have observed over several days." They say that Olympia would "not have the means to guarantee the security of its audience and employees." Indeed, Olympia claim that on Tuesday they received a letter from police headquarters that "reminded [the director] of his responsibilities" and pointed out "that the staff in private establishments are responsible for safety and security on their premises." Contacted by the AFP, Dieudo's agent said the "funny man" didn't want to "react in anger."

So much for that. Dieudonné decided to hold his show in the street outside the theater.


They came by the hundred to chant the slogan "freedom of speech" and to support Dieudonné, who decided to have his show on a platform erected on the sidewalk opposite Olympia, the venue where he was supposed to have performed on Friday and which canceled this.

The humorist raised his arms, greeted his fans, the "descendants of slaves," the "Arabs," the "blacks" and also the whites of all ages who had massed on the boulevard des Capucines in Paris, surrounded by anti-riot police. "We love you," shouted young girls, waving their cameras.

Libération is writing derisively that now Diedonné "takes himself for a defender of the black cause" and reports that the "comedian" said "400 years of slavery and we don't have the right to speak!"

Alain Finkielkraut is criticizing those who leveled threats against l'Olympia (causing the venue to fear for its safety), as he thinks they are "transforming [Dieudonné] into a martyr for human rights and freedom of speech."

Dieudonné is now claiming that he's been banned from French public television. "I've been banned from the TV... just like Coluche and Bedos once were." This was categorically denied however by France 2. Do you imagine they have any interest in seeing him ever again? Do you think many other venues will want to book him now? Can we now ask, as W. once did, "Dis donc Dieudo, les recettes de ton dernier spectacle, ça achète beaucoup de bananes?"
Posted by Douglas at 22:55

Le Monde is also offering a slide show of reconnaissance photos (note that in French reconnaissance means "gratitude") from World War II. Some are from the Imperial War Museum, some from the Aerial Reconnaissance Achives and some from the Public Record Office. They include that now famous photo of Auschwitz-Birkenau ("at its criminal apex") and of Omaha Beach (on D-day).
Posted by Douglas at 20:52

What communism would look like if implemented in a school cafeteria

writes Benny Huang regarding the "Unmistakable communist imagery in the form of enormous foam hands carrying a hammer and a sickle and the playing of an old Soviet hymn [which was] met with great applause."


Indifference was the primary reaction but some members of the press seemed to go as far as sharing the sentiment. Wasn’t communism grand?

No, actually it wasn’t. As an economic system communism fails, which causes shortages, which causes resentment against the government, which causes reciprocal governmental oppression. Communism stymies ingenuity and punishes productivity. It attempts to abolish God because it cannot tolerate any higher authority than the state.

… As much as conservatives find the idea of communism distasteful, it’s important to recognize that to some people communism sounds great, at least theoretically. These are the utopian idealists, and though most of them can see that communism’s grand designs did not bear fruit, they nonetheless have no regrets for daring to dream.

It’s hard to overestimate the enthusiasm with which the global elite greeted the October Revolution. For years to come the Soviet Union would serve as an inspiration to all those who trusted in the promise of humanism and inevitable progress.

… A remark made by our sitting president sheds some light on just what modern liberals think communism is. During a presidential debate in 2008, Senator McCain pressed Senator Obama on his reply to Joe the Plumber that “I think when you spread the wealth around, it’s good for everybody.” That statement sums up the socialist position as well as any I’ve ever heard but of course Obama denied it. “By the end of the week,” Obama replied, “[McCain]’ll be accusing me of being a secret communist because I shared my toys in kindergarten. I shared my—I shared my peanut butter and jelly sandwich.”

Huh? Did Obama really mean to imply that sharing is what defines a communist? Yes, and I think he was expressing a commonly held belief among members of his party.

Communists most certainly do not share. Sharing involves giving of yourself voluntarily. Communism means taking from other people by force. Giving and taking are opposites. How can anyone confuse the two?

How can anyone confuse this kind of tyrannical bullying with something as meretricious as sharing? The two concepts couldn’t possibly be more estranged, and yet, for the better part of one and a half centuries, communism has had its defenders precisely because so many people confuse forcibly seizing other people’s property with sharing.

It sounds as if Barack Obama is one of those people. It’s sad that a man with degrees from Columbia and Harvard believes that communism means giving a little of your own stuff to a guy who has less, but I suppose that that’s exactly what students learn in Ivy League schools.

The Académie Française may be prickly about the advance of English; but there is no real alternative as a global business language


The fashion began in places with small populations but global ambitions such as Singapore (which retained English as its lingua franca when it left the British empire in 1963), the Nordic countries and Switzerland. Goran Lindahl, a former boss of ABB, a Swiss-Swedish engineering giant, once described its official language as “poor English”. The practice spread to the big European countries: numerous German and French multinationals now use English in board meetings and official documents.

… The Académie française may be prickly about the advance of English. But there is no real alternative as a global business language. The most plausible contender, Mandarin Chinese, is one of the world’s most difficult to master, and least computer-friendly. It is not even universal in China: more than 400m people there do not speak it.

… English can provide a neutral language in a merger: when Germany’s Hoechst and France’s Rhône-Poulenc combined in 1999 to create Aventis, they decided it would be run in English, in part to avoid choosing between their respective languages.

All Quiet on the Western Front…

In case you think that No Pasarán has been unusually quiet these past couple of weeks, you are correct, and it is entirely due to the hassle linked to the entire renovation of one of the main bloggers' apartments — which hopefully (oh dear God yes!) will soon be finished…
Posted by Erik at 13:19

The latest scandal in France concerns the ubiquitousness in schools

of "children's" books with titles

such as Tous à poil ! (Everybody Drop Your Clothes), Papa porte une robe (Daddy Wears a Dress), Tango a deux papas (Tango Has Two Dads), and Jean a deux mamans (Johnny Has Two Mommies) — a subject which leftist Le Monde  dismisses as "not very subversive" and which allows for a cartoon by an outraged cartoonist (Xavier Gorce), while Plantu uses the subject to bring in the current criticisms of the tax authorities. 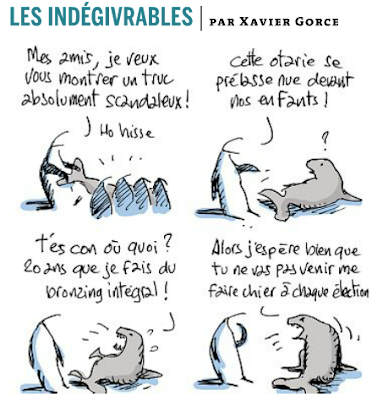 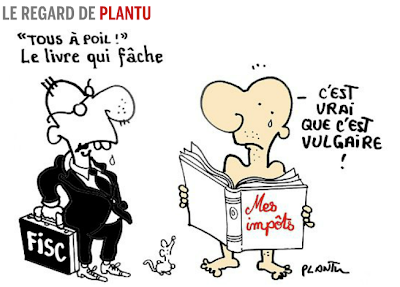