Obama "is destroying this country and it’s what he intended to do"; More Hatred From Racist Americans Who — Wait a Minute!

The frustration with the the leftist Democrats who support Barack Obama's agenda, notes Christopher Agee,


was on full display when a self-described “82-year-old black senior citizen grandmother” named Joyce called C-SPAN to explain why she voted for the Republican candidate in every race on the ballot this cycle.

“I voted straight Republican because I have noticed for years what the Democrat Party has done to my people,” she said. “Unemployment is higher in the black community that it is — double with unemployment than it is anywhere else.”

… Clarifying that she supports government assistance for those truly unable to provide for themselves, she noting that “with so many getting help that doesn’t need help, it prevents the people that really need help from getting it.”

… Before wrapping up her remarks, the octogenarian set her sights on those who allege any criticism of Barack Obama is rooted in racism.

“We need to stop that foolishness,” she said. “This man is destroying this country and it’s what he intended to do. He said he would transform America and that’s what he’s doing.”

Army Sergeant: “I love it when I hear, ‘Oh there weren’t any chemical weapons in Iraq. There were plenty.’"

Five thousand munitions containing nerve and blister agent were uncovered between 2004 and 2011. The revelation made headlines for a day or two before vanishing again.

As it turns out, the Bush administration knew about these weapons and, counter-intuitively, chose to keep them secret. Conjecture abounds as to why Team Bush would choose to withhold vindicating evidence. Some have suggested that no one wanted to look backwards at yesterday’s controversy.

… “The discoveries of these chemical weapons did not support the government’s invasion rationale,” write Pulitzer Prize winner CJ Chivers.


I can’t decide whether Chivers is deceitful or just another lazy journalist. Actually, those were exactly the weapons we were looking for. In November of 2002, President Bush asked the UN for, and received, Resolution 1441, which found Iraq in material breach of Resolution 667, the 1991 ceasefire agreement that ended the Gulf War. Resolution 667 demanded that Saddam destroy all of his chemical weapons and document the process to the satisfaction of UN weapons inspectors. He failed to do this.

… The diplomatic push of 2002 was the world’s final warning to the dictator that he had to forfeit those weapons known to be in his possession in 1991. The resolution is crystal clear. Over and over again it refers to Saddam’s failure to discard his pre-Gulf War weaponry. CJ Chivers is not just moving the goalposts, he’s rewriting history.

The idea that Saddam didn’t have any WMD was a little wacky, and yet it was those of us who insisted that he did who were portrayed as conspiracy theorists grasping at straws. He used those weapons against Iranians and Kurds. We know that they existed in 1991. Did they simple evaporate?

We now know that they did not. Quoted in Chivers’s story was Jarod Taylor, a former Army sergeant who handled some of the weapons. He remarked, “I love it when I hear, ‘Oh there weren’t any chemical weapons in Iraq. There were plenty.’”

… when the Times revealed that Saddam’s WMD were in fact not phantasmal, as we had been led to believe, I wondered if it was worth dredging up an old debate.


Yes, I decided. Because the truth matters.

The public deserves to know what really happened though it may never hear it because the Iraq War narrative is now so thoroughly rehearsed that it actively resists change. Tomorrow’s history books will probably tell an oversimplified and basically inaccurate story about an evil Texas oil man who sent his troops on a fool’s errand. That’s not the case and it’s important that the lie doesn’t become the “truth” because of constant repetition.


… The leadup to the Iraq invasion may seem like ancient history now. Heck, most kids in high school today can’t even remember it. It’s not too late however, to insist upon the truth because truth has a value of its own.

Among the Republican winners of the 2014 mid-terms is Tim Scott, the black South Carolinian who won his Senate seat in a landslide, making history in the process.

But even the Daily Mail seems to report on this landslide (!) victory mainly to report on America's alleged racism, i.e., to comment how "shocking" it is that Tim Scott is the first black man elected to the Senate. (Never mind the congressmen, the governors, the mayors, the business leaders, the sports stars, the movie and TV stars, the music stars, the occupant of the White House (!), etc, etc, etc…)

But isn't it possible that the true racism comes from the left — including the mainstream media itself? (There are quite a number of pretty outstanding comments in the comments section of the Guardian.) As I wrote in a post one year ago, a plethora of "inconvenient facts must be ignored or belittled by media people … in order to push the narrative that America is an intolerant hell hole of prejudice populated by hordes of despicable racists":


Every time I read a column [in which a member of the MSM] laments the racism he constantly finds among conservative groups … I wonder if he has ever heard about Tim Scott.  Given that for awhile, the legislator from South Carolina was the only member of the United States Senate who is African-American, one would think that his name might be — almost — as renowned as Barack Obama's.

The explanation for Scott's relative obscurity is that he is a Republican — one who is backed by Tea Partiers (endorsed by Tea Party favorite Jim DeMint, Scott's Senate predecessor) and one from a Southern state to boot.  And were Scott better known, it would be far more difficult for people like Krugman to bewail the racism of Republicans and Tea Partiers, not to mention Southerners.

You would think that this black pauper's rise from rags to the halls of the U.S. Senate is a living memorial to Martin Luther King's dream.  But because leftists (conveniently and self-servingly) define themselves as the valiant fighters against the racism they (conveniently and self-servingly) constantly find throughout the ranks of the Republican Party, it comes as no surprise that South Carolina's conservative Senator did not even receive an invitation to participate in the 50th anniversary commemorations of MLK's Lincoln Memorial speech.

Should Krugman need more evidence of his own prejudices, one could also mention Nikki Haley and Bobby Jindal, Republican governors (both of Indian heritage) backed by the Tea Party whose skin is about as dark as, if not darker than, that of Barack Obama. Yes, they too were elected in states from the former Confederacy.

As for blacks who are favorites of the Tea Party, either nationally or locally, they include Herman Cain, Allen West, and Mia Love as well as Thomas Sowell (the Stanford economist who deserves the Nobel Prize in Economics at least as much as Krugman), Walter Williams, and Larry Elder.  But all these African-Americans must be ignored, because for the Left, the only good "Negro" is the martyred "Negro" — the one who constantly thinks he and his like are victims and therefore votes for the victimization party (i.e., the Democrats).

Currently, one favorite of the Tea Party crowd for presidential candidate in 2016 is Dr Benjamin Carson, a neurosurgeon who is offering a free-market alternative to Obamacare that would keep prices down and Washington's brand-new army of bureaucrats out of the health care system.  His skin, too, is darker than Obama's.

But all these inconvenient facts must be ignored or belittled by media people like Krugman in order to push the narrative that America is an intolerant hell hole of prejudice populated by hordes of despicable racists. 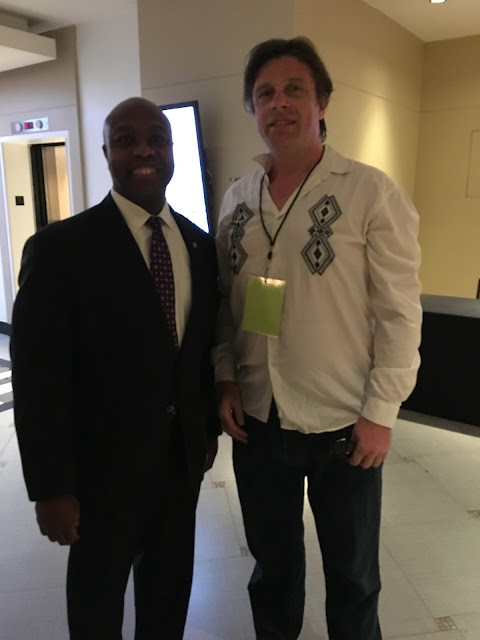