The story of D-Day.

Responding to a Bagehot column in The Economist, Robin Aitkin writes from Oxford that


Wistful daydreaming that the decision to leave the EU might one day be reversed might bring some comfort to bereaved Remainers. They are delusional. Ask this question: if Britain had never joined the EU would we now vote to do so? Looking at the wasteful, sclerotic and undemocratic grouping that it has become, only a Euro-enthusiast of the deepest hue could think that we would.

It is worth remembering that when Britain joined in the 1970s the country’s fortunes were at their lowest ebb. National morale was at rock-bottom and there were serious people who questioned whether Britain

Britain was actually governable, such was the dysfunctional nature of industrial relations. Across the Channel the EEC offered a vision of a better world with Germany still in the Wirtschaftswunder era and France enjoying les trente glorieuses. Britain’s decision to join the EU was akin to that of a drowning man who decides to grab a lifebelt. Today the situation is very different: the European economic model is no longer one that Britain envies and it is Britain which is the magnet for energetic migrants.

Reversing Brexit is now the longest of long shots. But if it is ever to be achieved Tony Blair, a discredited political huckster, is the very last man the public would turn to. Europhiles must find a new face to lead them to the promised land. 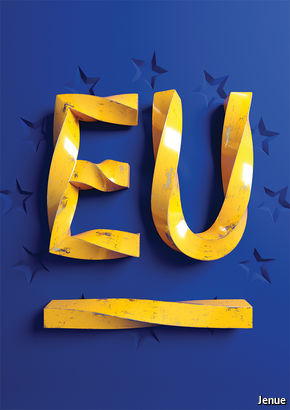 
There is a simple solution to the Brexit conundrum, one that will allow Britain to have its trade cake and eat it too [Special report on the future of the European Union, March 25th]: the UK need only become the 11th province of Canada. Canada and the EU recently concluded a trade agreement and the UK would accede to it as a Canadian province. It would also join NAFTA and enjoy liberal trade terms with the United States.

Adjustments would be few and easy. Canada’s provinces have wide powers and by treaty the UK’s could be even broader. The queen would remain head of state. As a provincial flag, the Union flag would still be flown, with the Canadian flag a discreet presence on government buildings. As Hong Kong and Macau kept the dollar and pataca, so Britain could keep the pound. English would be an official language (though so would French). Such a move wouldn’t be unprecedented. Newfoundland left the UK and joined Canada in 1949. Time to think outside the box.

It did take a few moments before I got the gist of Tom Murphy's comment from Montivilliers, France:

Ted Stroll suggested that Britain should become a new province of Canada after Brexit (Letters, April 6th). There are additional benefits to doing this. Britain would have access both to the boat-building technology of the Inuits and to the oil sands in Alberta. In this way it could have its kayak and heat it.