“We do not want to sell anything that offends people,” said Walmart CEO Doug McMillon.


McMillion is lying and he doesn’t even know it. Almost anything can be offensive to someone. Walmart doesn’t accommodate everyone’s prickly sensibilities because they couldn’t operate as a retailer if they did.

You know what offends me? Cheap crap made in Chinese sweat shops. Walmart won’t discontinue those products because then their shelves would be bare. But besides the entirety of their crappy inventory, I can think of a few individual items that offend at least some segment of the population. To name a few: Duck Dynasty merchandise, Barbie dolls, toy guns, real guns, Dan Brown books, the Bible, rap music, heavy metal, contraceptives, and tobacco.


Another strike against the American flag is that it is known to cause offense among the same demographic group—namely, black people. Not all blacks take umbrage at the sight of the flag, of course, but many do. If black Americans had to choose between the American and Confederate flags, Old Glory would surely win out, though many would prefer to have neither. Some black Americans associate it with slavery and oppression. I would argue that a lot more misdeeds could be cast upon the American flag than on the Confederate, if only because the USA has existed so much longer than the CSA ever did.

Witness the spate of flag-burning incidents that have surrounded the Ferguson, Baltimore, and New York protests. Many people see episodes of real or imagined police brutality as symptomatic of a distinctly American pathology. It’s not just a few abusive police officers they condemn, but the whole American system. They show their disgust for that system by incinerating the flag that symbolizes it. Blacks haven’t yet created a public relations headache surrounding the American flag, but that’s not to say that they never will. Will Walmart cave to their demands? Probably.


Most people reading this will probably think that the American flag has been the victim of a malicious frame-up, but that’s because most of this audience is center-right. The further one moves to the Left (or toward the extreme Right) the more animosity one feels toward our flag. For proudly “progressive” people, American history is one long, uninterrupted obscenity. The banner we’ve always rallied around is drenched in blood. Read a little Noam Chomsky and you’ll see what I mean.

The one-time comedian turned unbearable malcontent Janeane Garafolo summed up the feelings of her fellow leftists well when she said, “Our country is founded on a sham: our forefathers were slave-owning rich white guys who wanted it their way. So when I see the American flag, I go, ‘Oh my God, you’re insulting me.’ That you can have a gay parade on Christopher Street in New York, with naked men and women on a float cheering, ‘We’re here, we’re queer!’ –that’s what makes my heart swell. Not the flag, but a gay naked man or woman burning the flag. I get choked up with pride.” Deep down inside, that’s how most people to the left of Harry Reid really feel about America. Garafolo is just woman enough to admit it, and for that, I accord her respect.

I do not believe, however, that the Left reserves all of its hate for the American flag. With a few notable exceptions, leftists seem to hate flags generally.

… When people start waving flags, leftists get nervous. It all feels very fascistic, unless of course the flag in question is the rainbow flag, in which case they become the biggest flag-wavers of them all. The difference between the rainbow flag and most others is that the rainbow flag doesn’t represent a nation state—a key distinction in the Left’s appraisal of its value. Neither does their other favorite flag, the sky blue banner of the United Nations. The UN flag gives them a warm fuzzy because it represents internationalism. Systemic corruption, the Oil-for-Food scandal, and the persistent rape epidemic that seems to follow UN troops wherever they go never seem to dull leftists’ admiration for the UN flag. 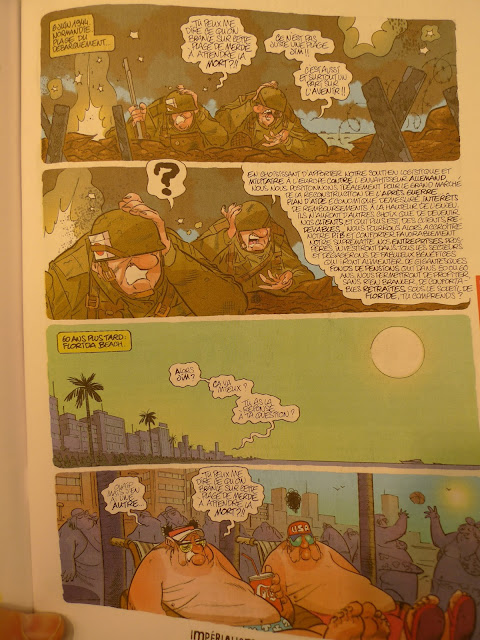 More interesting, back in January 2015, was their plethora of homages to their colleagues at Charlie Hebdo.

Bow or be persecuted — The ruling class shouts: “The debate is over!” “Shut the bigots up!”

warns Angelo M Codevilla, author of To Make and Keep Peace (2014) and The Ruling Class (2010) (thanks to Instapundit).

A whiff of “offensive” attitudes is enough for the ruling class to make you as untouchable as the lepers of old. Nor is silence a refuge.

Just as you must honor homosexuality, so you must affirm that certain Americans are “racists” addicted to “white privilege.” Do you demur? Then, Racist that you are, you must be shunned and should be fired. Do you support governmental efforts to reverse “anthropogenic global warming”? If you demur, you are a Denier who endangers our national security, and must be treated as a kook. Should you refuse to pledge your fealty to the proposition that life and the universe are the meaningless result of chance, you reveal yourself to be a Religious Zealot, an “American Taliban,” ineligible for public and private trust. Do you have reservations about the constitutionality or beneficence of administrative government? Then you are an Extremist, a proper target for Homeland Security, the IRS, the NSA, etc. Do you refuse to celebrate “terminating a pregnancy” as women’s fundamental right? Then you are a Warrior against Women, possibly a terrorist. Do you own guns? Ipso facto, you are a Violent Extremist.

The pretexts differ. But the reality is the same: Bow or be persecuted.

Law no longer protects you. The ruling class does not punish through laws, and seldom by official actions, nor in any manner amenable to argument. Its bites come from officials and judges, from the connected and protected, whose rule is “Stop me if you can,” and who shove reason aside with epithets such as “offensive” and “hateful.”


… The ruling class shouts: “The debate is over!” “Shut the bigots up!” This may cow public opinion, but it destroys the capacity to lead it.

In fact, public opinion can be led only by persuasion regarding true and false, better and worse. This is how free human beings deal with one another. No democratic case can be made for limiting substantive challenges to premises and pretensions. Lincoln, following John Quincy Adams, pointed again and again to the slaveholders’ efforts to silence debate about slavery’s moral and political effects as evidence of the slaveholders’ threat to the freedom of whites as well as of blacks. Like Adams, Lincoln pressed slavery’s hard, ugly realities upon audiences that preferred to evade them. As Lincoln brushed away the euphemisms and legal constructs in describing the slave trade’s merchandising of human beings, so should we not mince words regarding all that the ruling class demands that we honor.

Check out my post, Wondering Why Slavery Persisted for Almost 75 Years After the Founding of the USA? According to Lincoln, the Democrat Party's "Principled" Opposition to "Hate Speech".

… to reclaim the American people’s freedom from arbitrary power over minds and souls as well as bodies, to expose the false premises on which the ruling class’s pretenses rest, a candidate would have to imitate Abraham Lincoln. His debates with Stephen Douglas — no notes, much less teleprompters — dealt with complex matters before audiences few of whom had gone beyond elementary school, and enabled them seriously to discuss the choices they faced. Said Lincoln: “Let the people know the facts, and the Country will be saved.”

In our time, if a candidate were to challenge his opponents to bare-knuckle, Lincoln–Douglas sessions, his example might lead fellow citizens to reject the combination of poisonous sloganeering and of dominance, submissiveness, and corruption that now passes for politics. Retaking control of our lives requires us to reason with one another and to decide for ourselves what is good and bad, better and worse, true and false. This is how it was when we were free.

FYI: I am working on a biography of Abraham Lincoln with Dan Greenberg… 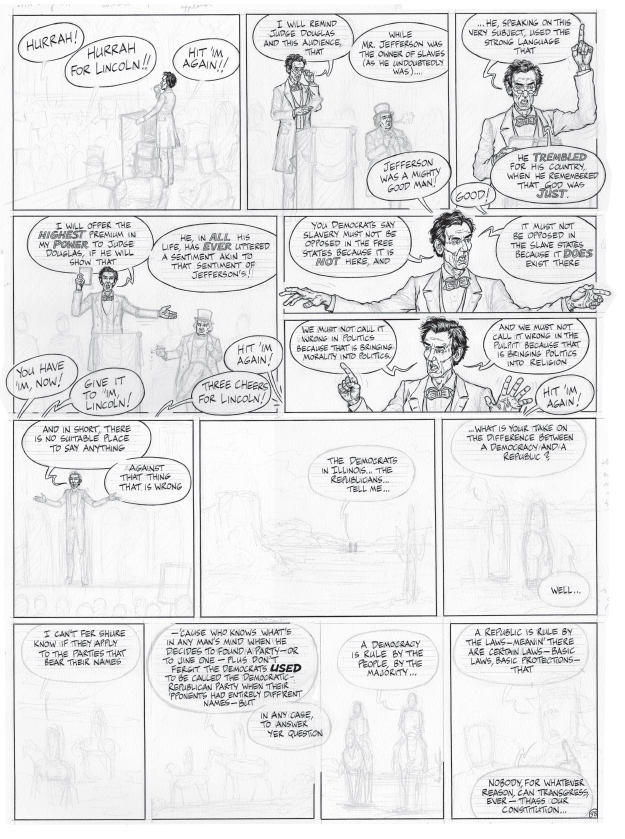 Following Lexington's report of Trigger-unhappy students in The Economist, Maggie McGirr writes that


The students Lexington mentioned as posing a threat to free speech on campus (June 13th) are the ones who relish their self-righteous fervour and enjoy the limelight as they call the shots in the classroom and bring professors to heel. They are the same students who decide that people like Christine Lagarde and Condoleezza Rice should have their invitations to speak at graduation ceremonies revoked because they don’t fit the PC bill. We know things have gone too far when a good-natured comedian such as Jerry Seinfeld gives up performing on college campuses because it is not worth the trouble.

These students are more than irritating, they are dangerous. They stand to devalue the university experience for many who have fought hard to get there. They should not be allowed to neuter the curriculum and hijack the classroom.

My Acting Stint and Friendship with Omar Sharif 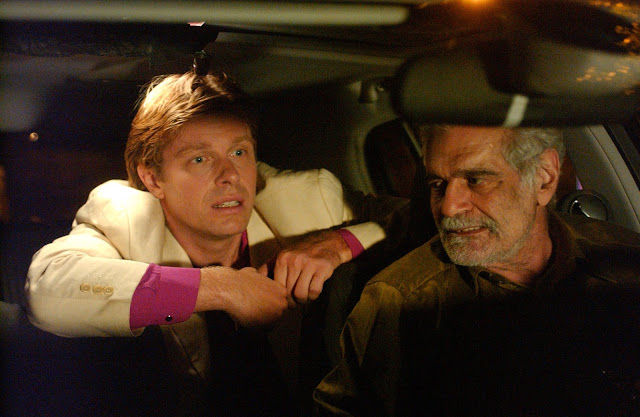 During the summer of 2003, my acting agent asked if I would like to do a part in a new TV series. Sure, I said. And by the way, I would be sharing some scenes with the show's star, none other than Omar Sharif.

It was a night shoot, he was to play a taxi driver and I was to play his passenger. I met him in a Boulogne-Billancourt apartment set up as a temporary dressing room, where he was totally nonchalant and set people straight at ease.

There was a party afterwards, and the following day Omar Sharif took the whole cast and crew to a fancy restaurant, where he paid the entire bill.

We became quite friendly, stayed in touch, and he would invite me over to the hotel out of which he was living for a drink in the bar. At other times, he would take me and a two or three other friends to a restaurant for lunch or dinner. He was popular with the ladies, to say the least…

Once, in the car (I can now reveal), he was talking with his girlfriend at the wheel and a lawyer over the phone aboutthe trouble he was in  for head-butting a security guard at a casino. He told me: "Tu ne dis rien à personne, hein?" (keep what you hear to yourself).

When his hotel was shut down for refurbishment, I lost contact with him, and I never got to offer him a copy of my first graphic novel. 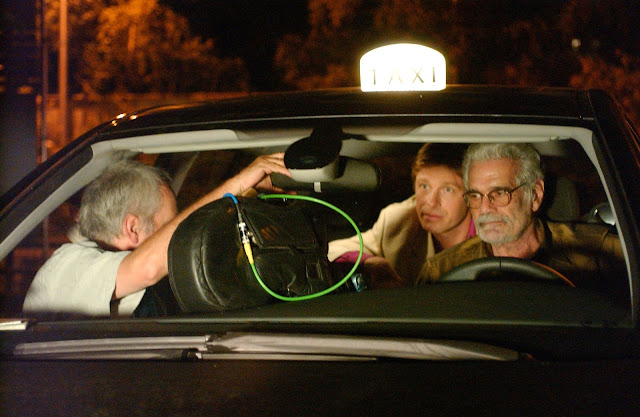 • Omar Sharif, the star of Lawrence of Arabia and Doctor Zhivago and one of the world's greatest bridge players, is dead at 83 (interview in French) 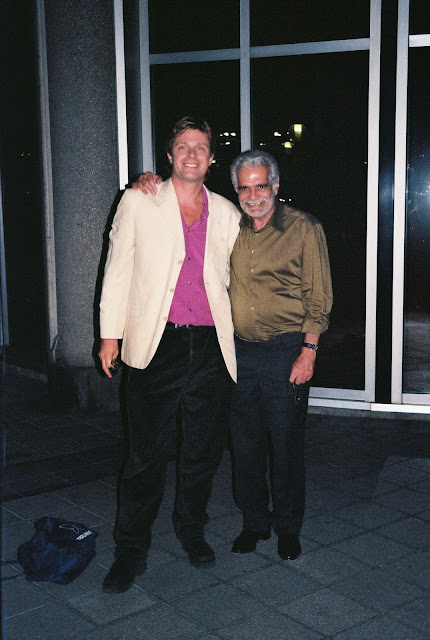