The First Gulf War, The Dirty One Between Iraq and Iran, Turns Out to Have Been a Synthesis of Both World Wars

Because gas and trench warfare were used like in the conflict started in 1914, writes Gaïdz Minassian in his Le Monde book review of Pierre Razoux's La Guerre Iran-Irak, première guerre du Golfe 1980-1988, along with major tank battles and the bombing of cities like in the conflict started in 1939, the "first" Gulf War turns out to have been a synthesis of both world wars. (The conflict between Iraq and Iran from 1980 to 1988 is the first Gulf War, the second Gulf War is the one from 1991, and the third is the one from 2003 to 2011.)

Real Voices on the ACA: "My premiums already tripled on anticipation"; "our bare bone plan is gonna be terminated on Jan 1 2014 because of MugabeCare"

Regarding Health Insurance Marketplace premiums, a bunch of friends have been emailing back and forth recently how well they have been doing with regards to Barack Obama's "unaffordable care act" and how much better off they will be next year:


Yikes! I don't think Obamacare is going to be a good deal for me. Huge increase over my current plan.

My premiums already tripled on anticipation.  If you include my employer's part of the seal, its cost now is equal to more than a quarter of my gross pay.


I learned 5 months ago that, due to OCare, [my] insurance would cease after Dec. 31. [My husband] doesn’t know the exact figure, but his and [our daughter’s] will go up. We contacted insurance brokers and the BC/BS plan that [my husband and daughter] are on to see if I could get on. All said the same thing “We have to wait until Oct 1.”

How those scumbags in Congress sleep at night is beyond me. Guess evil is not pricked by conscience.

When I was young I studied the American Revolution and the French Revolution. The great violence of the latter was hard for me to understand. I understand it now.

Friends contact the U.S. House of Representatives and let them know how this wonderful program THEY BEGGED to not be applied to THEM is affecting you. Urge them, as this speaker does in the video below , to defund this monstrosity.
http://gohmert.house.gov/


Right on, Sister. This is not the Change we were Hoping for.

I haven't found anyone that I know, Dem or Republican, that believes Mugabecare (if I may borrow RV's apt description) is the right answer to fixing our healthcare system. So, it astounds me that anyone in Washington can support his law. However, as I understand the situation, it will get funded. As long as the Dems can get this thing going, it won't be eliminated or stopped. Revised, yes. But, we will have socialized medicine in this country. And that's a bad thing.

Yesterday [Wednesday], Obama finally admitted that his Unaffordable Healthcare Act does raise taxes. Another lie admitted to. What is a government that totally lacks credibility?


[My wife] and I are on a bare bone BC/BS plan for about $400/mo. But it's gonna be terminated on Jan 1 2014 because of MugabeCare, and to this day I don't know what we're gonna replace it with. It's gonna be cancelled because it doesn't cover abortion and mammograms for me, and testosterone injections for [my wife].

In addition, does anyone realize the deduction for medical expenses must now be at least 10% of gross income instead of 7.5% currently?

We are being taxed to death...does that mean the death panels are already running the show? :-)

They're creating artificial scarcity.  They want the whole medical system to collapse financially so that it can be nationalized.

It's a government acting directly against its people's interest.

For Vladimir V. Putin: Just FYI, my grandparents did not flee the United States for Russia

Can I publish an opinion critical of you in Moscow’s most prominent daily?

Just F.Y.I., my grandparents did not flee the United States for Russia.


It is stunning that President Vladimir V. Putin has the audacity to write about freedom, democracy and equality. Mr. Putin is responsible for some of the most repressive antigay laws in the world. He has orchestrated mass arrests and crackdowns on ordinary protesters.

While he may be attempting to come across as sensible on these issues, his record in Russia speaks volumes, and in this case taking what he says with a grain of salt would be generous.

After the France24 story of the former French ambassador to Baghdad who got caught with 350,000 Euros in cash, we get Laurent Zecchini's story of the French consulate chauffeur in Jerusalem who was found to be crossing across the border to Jordan with 152 kilos of gold bars, 500 kilos of tobacco, hundreds of new cel phones, and $2 million in checks.

Insofar as the car in the photo is representative of French diplomatic vehicles, one reader complains that French diplomats are doing their work German Volkswagens.

Smart Diplomacy: Brazilian President complains to Obama about "a grave violation of human rights" and "especially of disrespect to national sovereignty"


"We face, Mr President, a situation of a grave violation of human rights and civil liberties; of invasion and capture of confidential information concerning corporate activities, and especially of disrespect to national sovereignty".

… She asked the United Nations to play a leading role in regulating electronic technology and said Brazil would present proposals for a "civilian multilateral framework" for the governance and use of the internet and to protect web-based data.

That Was Before America's Capitalist Society Betrayed Him — and Us… 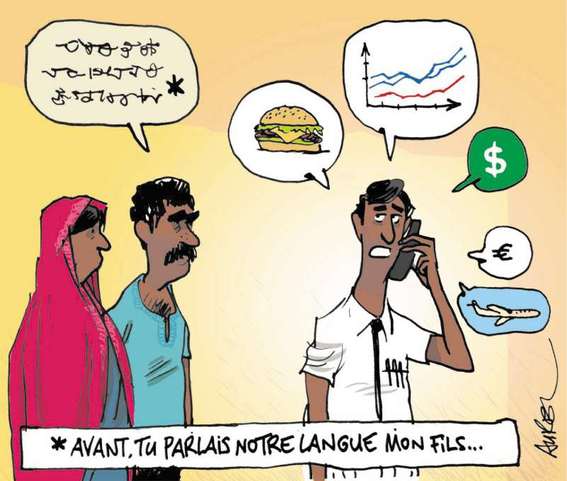 In Julien Bouissou's article on a quarter of India's minority languages being in danger of disappearing, Le Monde's cartoonist manages to turn the story into an anti-American, anti-capitalist screed.


• Before, you used to speak our language, my son…

Michael Yon: When Concealed Carry Counts — The big difference is that one gunman can kill 20 unarmed people, but if they are armed and trained, he might get only 2 or 3


Many people have said or strongly hinted that firearms related massacres only (or usually) happen in gun free zones. The statement that they openly make is that the attacks would not occur if the people were armed. This is completely false. We just had another Green on Blue in Afghanistan this week. Blue on Blue and Green on Blue often happen against heavily armed people.

The big difference is that one gunman will have a very hard time killing twenty armed people.

He can kill twenty unarmed people, but if they are armed and trained, he might get two or three, or even ten if he is truly "good", but he will quickly be put down, chased off, or holed up in a defensive position. At minimum, he will be slowed, giving people a chance to escape.

But over in Norway, a single madman killed 77 unarmed people who did not fight back. If just one of those people had a pistol, the death toll might have been 10. We never will know.

Now in Nairobi, reports have it that 10-15 heavily armed terrorists have killed at least 68 so far. The terrorists have been pushed into defense. The final battle appears to be unfolding. My guess is that the Kenyans are taking back the mall piece by piece. It is a big mall so that takes time due to the complication of the hostages.

Images from the early stages of the attack show people with handguns. Clearly some people were fighting back early into the attack. But imagine a terrorist attack like this in a US state where guns are all but outlawed. 10-15 terrorists could kill hundreds.

See also: Another Mass Killing, Another Nutcase with Plenty of Warning Signs
and my extensive and dispassionate in-depth post on gun control:
What Is to Blame for the Connecticut Shooting?
Does the Blame Lie with the Right to Bear Arms Or Can It Be Found Elsewhere?
Posted by Erik at 09:59

Robin Williams: Divorce is "ripping your heart out through your wallet"

As Robin Williams tells it, this is what feminist-imposed government intrusion into private life has wrought: as if separation weren't painful enough, lawyers intrude and ensure that


Divorce is expensive. I used to joke they were going to call it "all the money", but they changed it to 'alimony'. It's ripping your heart out through your wallet.

Don't forget to check out Stephen Baskerville's Taken Into Custody (The War Against Fathers, Marriage, and the Family)
Posted by Erik at 21:00

The Venezuelan State's Occupy "Movement": The Victory of Socialism!


in what it called an effort to ensure consistent supplies after embarrassing shortages earlier this year.

Critics of President Nicolas Maduro say the nagging shortages of products ranging from bathroom tissue to milk are a sign his socialist government's rigid price and currency controls are failing. They have also used the situation to poke fun at his administration on social media networks.

A national agency called Sundecop, which enforces price controls, said in a statement it would occupy one of the factories belonging to paper producer Manpa for 15 days, adding that National Guard troops would "safeguard" the facility.


Having grown in a staunch Socialist country, I was always told Socialism is the Glorious Path to a Bright and Enlightened Future, where great intellectuals will be describing the greatness of Socialism while sipping delicious cocktails, sitting on chairs at tables overlooking the happy proletariat running naked in the fields, laughing and chanting with butterfields and pink rabbits.

Well, they gotta start some place: no running naked after pink rabbits and butterflies if you don't wipe your ass, comrade.

From the archives: Note to the Apologizer-in-Chief (Barack Obama):
No, a Republic Is Not Equal to a Dictatorship

Six months ago, Maria Thunholm took pictures of
a mural in Paris saying "Rest in PEACE Hugo Chávez"…
Posted by Erik at 08:23