A business deals that threatened to break up a government 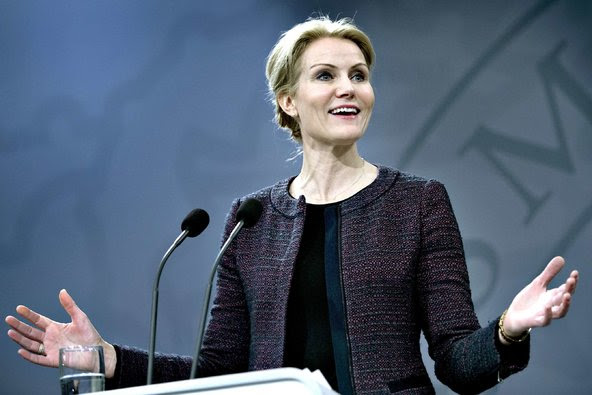 There are groundbreaking business deals. And then there are ones that threaten to break up governments.

Thus spake Danny Hakim in the New York Times a few months ago.

When Denmark gave the global financial giant Goldman Sachs the go-ahead on Thursday to buy a stake in its state utility, the move was not exactly followed by a celebratory signing ceremony.

So divided was the Socialist People’s Party that it withdrew its ministers from the country’s governing coalition. Some party members said the deal ceded too much power to Goldman. Annette Vilhelmsen, the party’s leader [pictured below], who supported the deal, stepped down from her leadership role since she could not reach agreement within her party.

The party’s withdrawal from the coalition left the government of Helle Thorning-Schmidt [she of the Cameron/Obama selfie at the Nelson Mandela funeral, pictured above], the prime minister, with a tenuous grip on power.

That so many Danes have been aghast at the idea of giving Goldman Sachs a prominent role in the country’s energy future reflects how far the damage to the investment bank’s reputation has spread since the financial crisis.

However much the financial world might envy Goldman’s trading prowess, many Danes see Goldman as an emblem of an industry that helped cause the crisis and then profited handsomely even as much of the Continent still struggles to recover. … The deal was approved … by a parliamentary committee. The departure of the Socialists left the two remaining parties in a precarious position.

… But Prime Minister Thorning-Schmidt, who is best known internationally for her recent “selfie” with President Obama at the funeral of Nelson Mandela, said she would form a new government.

… Under the terms of the deal, Goldman would invest about $1.45 billion for an 18 percent stake in Dong Energy, the state utility, which has become a green energy exemplar in its push for electricity from wind turbines. Though the deal buys far from a controlling share, the minority stake would come with special privileges.


(that’s sort of the point of debate). Unlike many of my liberal contemporaries, I don’t “manage” my blog comments

until I have an echo chamber and my self-esteem isn’t predicated on how many sycophants pat my tender head while telling me how brilliant I am for standing up for some straw man cause de jour. I’ve got a bunch of regular left wing readers who can bring their A Game. I love them. Arguing with them, and honing my points against them makes my arguments stronger for the future.

Sadly, for every intelligent, articulate Eric Flint out there, most arguments against liberal group think results in a legion of poo flinging monkeys showing up.

This checklist is intended only for the willfully ignorant, banally stupid, sound byte spewers incapable of thinking through anything more complicated than a Facebook meme. The lowest form of debater is the pathetic crap sacks that can only follow this checklist.

If you are on my side, but this is how you debate, shut up. You’re making us look bad. Good arguing should consist of compelling rhetoric which is backed up with facts and logic. If your tactics are to shut down debate, you are an idiot. It should never be to shut down or scare off, but to WIN.


Read the whole thing to see Larry break it down


so you know what to look for, and you can have a good laugh as people who have zero substance, critical thinking skills, or facts make fools of themselves!

Benjamin Duffy, a reader of No Pasaréan from its earliest days as well as an Iraq veteran whose post writings have been frequently linked on this blog, is now an author in his own right. He was already the author of a novella, his first book is out, and its title sounds heroic enough: We Are Fat and We Are Legion!

When fat civil rights activist Gabby Medeiros's supersized boyfriend decides to lose weight, he unwittingly forms a fissure in their relationship. Can their relationship survive? As a fat acceptance warrior, Gabby necessarily rejects dieting as unhealthy and counterproductive. 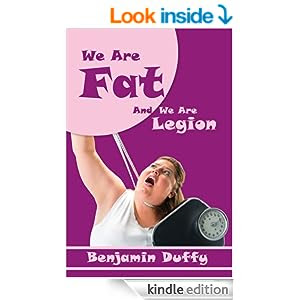 A telephone bill collector by day, she spends two evenings a week doing what she really loves: pontificating from her position at the local radio station about the evils of the diet industry and a society that shames those who don't fill out the proper dimensions. Though people sometimes snicker at the cause she holds so dear, fat acceptance is very serious business for Gabby. When her live-in beau Denny Emory tells her that he is going to lose weight in order to control his diabetes, Gabby advises against it. Slowly, his diet changes the very dynamic of their relationship, to the point that Gabby questions whether it will survive.

FYI, I can confirm that Ben seems to have changed little, physically speaking, since the first time I met him, he has not gained weight, and he is still a slender, well-built guy. As for his new title, the first person to write a book review on Amazon sounds enthusiastic:


Loved the story and I was amazed at the amount of medical research done by Ben. I almost thought it was really OK to be fat.

What makes England great, asks The Daily Telegraph. Among the things up for a(n inter)national vote are several foods (believe it or not), Robin Hood, the Magna Carta, and

World renowned yet elusive graffiti artist Banksy [who] is from Bristol and many o[whose] original murals can still be seen on walls around the city and beyond. This example, which popped up recently in Cheltenham near GCHQ, depicting spies listening in on a phone box, is thought to be his work (Picture: Matt Cardy / Getty Images).


The top thing that sums up England's contribution to the world more than anything else will be revealed next Wednesday, April 23 – St George's Day. See the shortlist of 60 at englandshalloffame.com/shortlist or visit the exhibition at the Southbank Observation Point, London, from April 23 to 30.

The taxpayer will be robbed blind and anyone who doesn’t like it is a bad Christian, anti-American, and of course racist


… The “no illegals” pledge was a calculated lie that the president and his supporters discarded as soon as it was no longer needed. President Obama was counting on the people’s short memories not to recall the promises he made in order to ram through his pet piece of legislation, and on the sycophant press’s loyalty not to remind the public of what he said.

Anyone with a memory longer than a goldfish will remember the uproar that Representative Joe Wilson (R-South Carolina) caused at the 2009 State of the Union Address when he shouted “You lie!” during the new president’s remarks. Fewer people will remember what Obama was lying about.

“There are also those who claim that our reform effort will insure illegal immigrants,” said Obama. “This, too, is false – the reforms I’m proposing would not apply to those who are here illegally.”

At that point Wilson rudely interrupted President Obama’s absurd lie, for which he later apologized. The president however, has not yet apologized for deluding us all. He still thinks he’s the wronged party because someone with no respect for decorum sounded the baloney alarm while he had the floor.

… All liberals had to do was lie to get the enormous new entitlement established. Having achieved that, they can now shame anyone who was actually dumb enough to believe them by accusing them of depriving poor people of badly needed medical care, no doubt because of racist motives. “Of course Obamacare won’t cover illegals” is slowly being replaced with “What’s wrong with Obamacare helping the undocumented?”

… To think that the new healthcare entitlement will be any different from previous entitlements is the pinnacle of foolishness. We’ve been down this road a thousand times before. The program is supposedly only for citizens or legal resident aliens, but in reality no one’s checking. It will all run on the honor system, at the insistence of the dishonorable. The taxpayer will be robbed blind and anyone who doesn’t like it is a bad Christian, anti-American, and of course racist.