Starting in the late 60s, child support and alimony went from necessary evil to an open bribe available to any woman who was willing to betray her husband and children

… starting in the late sixties we reorganized our legal and social structure with the (unquestioned) assumption that replacing marriage wasn’t a necessary evil, but a moral imperative


We replaced a patchwork of bastardy laws with a declaration that legitimacy doesn’t matter.  Around the same time, we ushered in no fault divorce with very strong bias towards mother custody, while leaving in place the punitive practices of child support and alimony.  Suddenly child support and alimony went from necessary evil to an open bribe available to any woman who was willing to betray her husband and children.

Now we not only promise a woman cash and prizes if she will agree to betray her family, but we have created a presumption of guilt on the part of the very husband she sells out. As Lydia McGrew explains here it is misogyny to not assume that our pandemic of wife initiated divorce is proof that the men must have had it coming.

This assumption that the sin of divorce must be justified is combining with the lure of the financial reward to sin and snaring very large numbers of women.  Where Christians should be defending marriage and discouraging sin, most are enthusiastic supporters of child support and stand forever ready to offer justifications for women to divorce their husbands, however flimsy.   However, remaining silent about the evil of child support and alimony and encouraging frivolous divorce is not kind to women and children;  it is cruelty.

In our current rush to find some fault, any fault, by the husband to justify the divorcing wife we aren’t being honest that the standing offer of a cash reward for ending her marriage can’t help but cloud her judgment.

Update: Instapundit links another Dalrock post:
The Great Douchebag Mystery, or, How Douchebags Are Created
Posted by Erik at 13:58

Leading From Behind: Obama Wants to Give an Important Role to Hollande 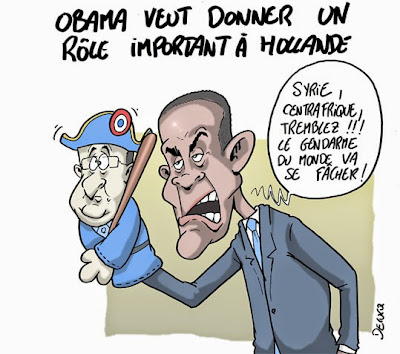 Delucq describes an American puppeteer leading from behind — from behind a constable-looking Hollande puppet in his hand:

• Barack Obama: Tremble, Syria! Shake in your boots, Central Africa! The world's policeman is about to get mad!
Posted by Erik at 19:28

Restored WWII plane to return to Normandy for D-Day anniversary

At the invitation of the French government, [a] restored Douglas C-47 will fly in for 70th-anniversary festivities and again release paratroopers over the original jump zone at Sainte-Mere-Eglise


"There are very few of these planes still flying, and this plane was very significant on D-Day," said Erin Vitale, chairwoman of the Return to Normandy Project. "It dropped people that were some of the first into Sainte-Mere-Eglise and liberated that town."


… Leslie Palmer Cruise Jr. … still remembers being squashed between other paratroopers seated on pan seats as the plane left England's Cottesmore Airdrome. He was weighed down with probably 100 pounds of gear, including an M-1 rifle that was carried in three pieces, 30-caliber rifle ammo, a first-aid pack, grenade, K-rations and his New Testament in his left pocket, over his heart.

"We could hear the louder roar as each plane following the leader accelerated down the runway and lifted into the air," he wrote in an account of the mission. "Our turn came and the quivering craft gathered momentum along the path right behind the plane in front."

The airplane's engines were so loud he had to shout even to talk with the paratrooper next to him, he said, and the scenery through its square windows looked like shadows in the dark. Over the English Channel, a colonel pointed downward.

"In the partial darkness below we could make out silhouetted shapes of ships and there must have been thousands of them all sizes and kinds," Cruise wrote. "If we had any doubts before about the certainty of the invasion, they were dispelled now."