Some Thoughts on American Patriotism…

Some Thoughts on American Patriotism…


…/… Following 911, I expected French friends and acquaintances of mine who came back from visits to the U.S. to return with some sense of respect or admiration. Don't kid yourselves! Many shared the same tone of exasperation and disbelief in their voices: How can one be so patriotic (that is, so superstitious)?

It was a rhetorical question, and some were surprised that I answered it. My answer was that I didn't know what they are talking about. What happens when one goes to the United States? One sees a lot of flags and… That's about it. Ain't that right? One does not see hysterical demonstrations walking down the avenues. One does not see signs reading "Down with the Taliban" or "Death to Iraq". One does not hear the "cowboys" shout "Vive la guerre!" I have not seen many Americans set fire to Iraqi or Afghan (or Vietnamese) flags. I don't remember seeing any throw tomatoes or molotov cocktails on the Soviet or Chinese embassies.

…/… We have seen many a time on this weblog that by simply doing a little digging, it appears that so-called humanistic activists (whether in the shape of intellectuals, groups, national leaders, or countries) are not as neutral, idealistic, and lucid as they seem to believe themselves, but present many an inconsistency, often more than the Americans they criticize. Thus it is with patriotism as well. In contrast to the irony expressed when dealing with American patriotism (and that of other Western countries), they seem often to lose all their marbles when confronted with the national pride of developing countries. They can only marvel when third-world countries (or, rather, their unelected leaders) evoke "national aspirations" and the construction and the future of their nations.

In the aftermath of 911, then, Americans unfurled the Stars and Stripes, voiced their support for the acting president, and pulled up their sleeves to go to work. Insofar as this character trait is supposed to provoke ridicule, I find it rather solemn and low key. And there is nothing new about this. In fact, the journalist Arthur Higbee, a Pacific War veteran, wrote in the International Herald Tribune that after Pearl Harbour, America's attitude was even more low key.


Very few people hung out flags, and nobody wore a flag lapelpin. No flag-waving was needed. The tone of the nation was one of grim determination. Recruiting offices were overflowing.

"Grim determination": there is a better description of patriotic America, today and in the past, than Dana Burde's pacifist caricature which was praised by Le Monde ("the loud cries demanding war and vengeance, combined with media censorship, have almost drowned out the few voices of the left" [the only voices filled with reason and understanding, of course, you realize]) — a caricature which has been eagerly repeated day in and day out in the French media, in the European media, and in the Arab media for years.

But it is not only in wartime that American patriotism is low-key. While many countries favor solemn military parades on their national holidays, or at least a predominant role for the military, the Fourth of July is, above all things, a party. Oh, of course there is the flag ceremony, with a handful of military people present from each service — army, navy, air force, marines — but it's above all a party, with barbecueing (hotdogs, burgers, spare ribs, etc), games, and fireworks.

And if the military — and veterans — have a special place at the festivities, whether on July Fourth or other holidays, they are only a piece of the puzzle which also includes bands, pompon girls, floats, ethnic pride groups, cowboys, Indians, and clowns — I've seen a parade where the marching soldiers were preceded, followed, and surrounded by dozens of clowns. (Try that on the Champs-Élysées, in Red Square, on at Tien An Men!)

As I write this — 4 juillet oblige — I am listening to the Jingle Cats sing The Star-Spangled Banner and Yankee Doodle Dandy. For some reason, I have trouble imagining a lucid Frenchman, a down-to-earth Russian, or a wise Chinese person setting their national anthems to cats' meows. Non, their wailing takes other, less enjoyable, directions.

Wailing Europeans and other Uncle Sam detractors ought to make sure they keep their droning continuous and never-ending. Because, if instead of endlessly lamenting the distressing state of Americans' patriotism, they were to shut up and try and study it a little more closely and a little more rationally, they might come to believe that Yankee patriotism is not so mystical, or frightening, or perilous, as is commonly believed. Then they would have less to wail about. Can you imagine that!? Wouldn't that be awful?!

As for me, for some reason, I prefer the laughter and the joy of the American spirit.

Happy Fourth of July, everybody!

Read the whole thing…
Posted by Erik at 23:35 No comments:

Conservatives don’t oppose a government-dominated health system because we are heartless; This fight isn’t about having the cheapest health care, but the best

We will soon have to decide if we want a market oriented health care system, or a government dominated system

writes Darrick Johnson as the Resurgent contributor (who likes — a minimum — three spaces between sentences) tackles The Cruel Hopelessness Of “Single Payer”.


In the current debate over the Affordable Care Act, we really are in the midst of a great proxy war over single payer health care.   Sure, its not on the table with this Congress, and Obamacare, while a bureaucratic monstrosity, isn’t single payer.   But the debate surrounding GOP efforts to repeal, or at least reform the law is really a precursor to a national debate over single payer.

Regardless of the fate of the GOP pseudo-repeal bill, we are at a crossroads.  Obamacare is collapsing.   It was never intended to be permanent.  It was always a compromise, a bridge to complete, government sponsored, single payer health care.  We will soon have to decide if we want a market oriented health care system, or a government dominated system.

Every left-wing opinion piece on health care starts with the premise that medicine shouldn’t cost anything, and anytime it does, it’s a evidence of a failed system.  They point to Canada, the UK, and European states where the socialist dreams of medicine are, we are told, coming true.  Obamacare’s failures, they say, should drive us closer to “single payer”, not farther away.

Read the differences between the Jones family and the Smith family, and see how it relates to the very real nightmare of the Gard family in the UK. (Cheers for the link, Maggie.)


No system will be perfect.  Health care is vitally important to each of us, therefore it will be expensive; it is the definition of inelastic demand.    We don’t all have the financial ability to pay for what we might need, be it through insurance, or our own money.    But if faced with the choice of two terrible scenarios, – the Smith family’s hopeless “free” health care, the Gard family’s real life nightmare, or the Jones family’s expensive, but attainable care, wouldn’t you rather be the Jones family?   At least they can fight.  At least they can try.  At least there is hope.

Conservatives don’t oppose single payer because we are heartless.   This fight isn’t mainly about tax rates, or deficits, though single payer is catastrophic for both.   It’s about having not the cheapest health care, but the best.    So that when you need a hospital bed, the market makes sure you don’t have to wait until it’s too late.  So that when you have a rare disease, there is hope that the market found it worthwhile to develop a treatment.   That might mean that when you have medical issues, money is a worry.   You get scary bills.   But you have hope.   If the treatment is available, but the money is not, that can be fixed.   If the health care is free, but the government doesn’t permit you to receive it…well, that’s a cruelty we don’t want to see replicated in the United States. 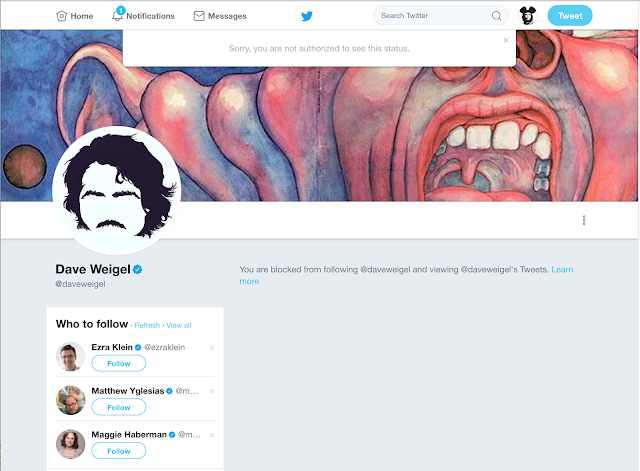 While reading Mary Katharine Ham's take on how the Aftermath Of Alexandria Shooting Showed The Left’s Cultural Bullying At Its Worst, we tried to access the following hyperlink:


… in the wake of Handel’s solid win, which snatched the #Resistance’s longed-for victory, Washington Post writer Dave Weigel scolded Republicans for “dunking” on Democrats despite everyone’s one-day indulgence of “come together” rhetoric, as if four hours of praise-hands emoji and super-hot memes on Twitter is part of the “climate of hate.”

It turns out No Pasarán has been blocked.

Echoing Tyler O'Neil, we get more from Mary Katharine Ham:


Rep. Mo Brooks faced the question about his Second Amendment views just minutes after someone literally tried to murder him. Can we take a moment to think about how utterly crass this is? Imagine an abortion bomber blowing up a Planned Parenthood grand opening in Washington DC, injuring members of Congress in attendance. Then imagine most national news coverage including this question for their colleagues who escaped maiming: “Shouldn’t you probably consider changing your views on abortion? Maybe pass some common-sense limits on it?”

… Less than 48 hours after a multiple assassination attempt on members of Congress, there were no media vans or cameras at the Alexandria baseball field where it occurred. Just for perspective, when Republican staffer Elizabeth Lauten committed the offense of writing something critical of President Obama’s daughters on her private Facebook page, news cameras were camped on her parents’ lawn staking her out for the better part of a week.

When the press was covering the shooting, it was mostly a gauzy, imprecise discussion of how “rhetoric” might have caused it, which means we’re in the business of determining whose rhetoric to stifle to prevent further violence. Wouldn’t you know it? The answer was… Donald Trump’s rhetoric, which has the magical power to compel a Bernie volunteer to shoot a long-time Trump-supporting Republican.

… What perverse standards. A Republican congressman is fighting for his life in a hospital thanks to a partisan attacker, but let’s examine on national TV several times over how he kind of had it coming because of his politics.