Cheers, Elizabeth: You Brought Us So Much, Your Majesty 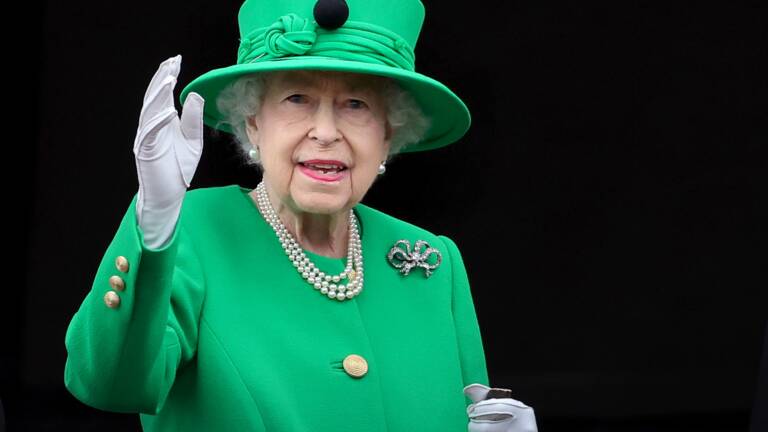 Today is no time to remember the Germanic origins of the Windsor family nor the scandals which rocked the Crown nor the reaction in Ireland nor, indeed, such items as the previous record-holder, Queen Victoria, or Prince Philip's humor. (If you click on one link in this post, Philip's "humour" should be it.)

Today is the time to mourn the head of the Anglican Church, Elizabeth II, under whose charm Winston Churchill (and most of her other 14 prime ministers) fell — who held a particular post in the culture, from James Bond 007 (Daniel Craig) to the Simpsons through the Sex Pistols' Johnny Rotten. (Cheers to our mate Ed Driscoll.)


And Géo Magazine brings us a diaporama of the queen's life while predicting what to expect in the coming days and during the funeral of Windsor Castle's chief inhabitant, seemingly the UK's last tie to World War II and to the British Empire.

A couple of (somewhat) remarkable things that Queen Elizabeth II and King Charles III did — when they were still Princess Elizabeth and Prince Charles (aka the Prince of Wales) — was give their successors names that no king had used for some 200 to 300 years.

The previous King Charles (II) passed away in 1685 while the previous King William (IV) died in 1837, and neither seem to have done much to deserve unfettered admiration. In fact, William IV seems to  be remembered today mainly as the uncle and predecessor of Queen Victoria, while both King Charles II and his father (Charles I) were seen at the time (as well as in modern times, somewhat) as something akin to traitors, leading to Cromwell's trial and beheading of Charles I — so Elizabeth's choice of a name was particularly courageous.

Update: As far Power Link's Week in Pictures comment about Charles inheriting the throne at the age of 73 is concerned ("it is amazing that the guy is taking the throne at an age when most men have started into retirement. Whatever happened to boy kings, etc?"), it is far from uncommon for one monarch having an exceedingly long reign, immediately followed by the son or daughter (quite naturally) with a rather short one. With Victoria and Edward VII, it was similar (reigns of 63 years and 9 years, respectively), as it was for their contemporaries, Denmark's Christian IX and his son Frederik VIII (42 years and 6 years). 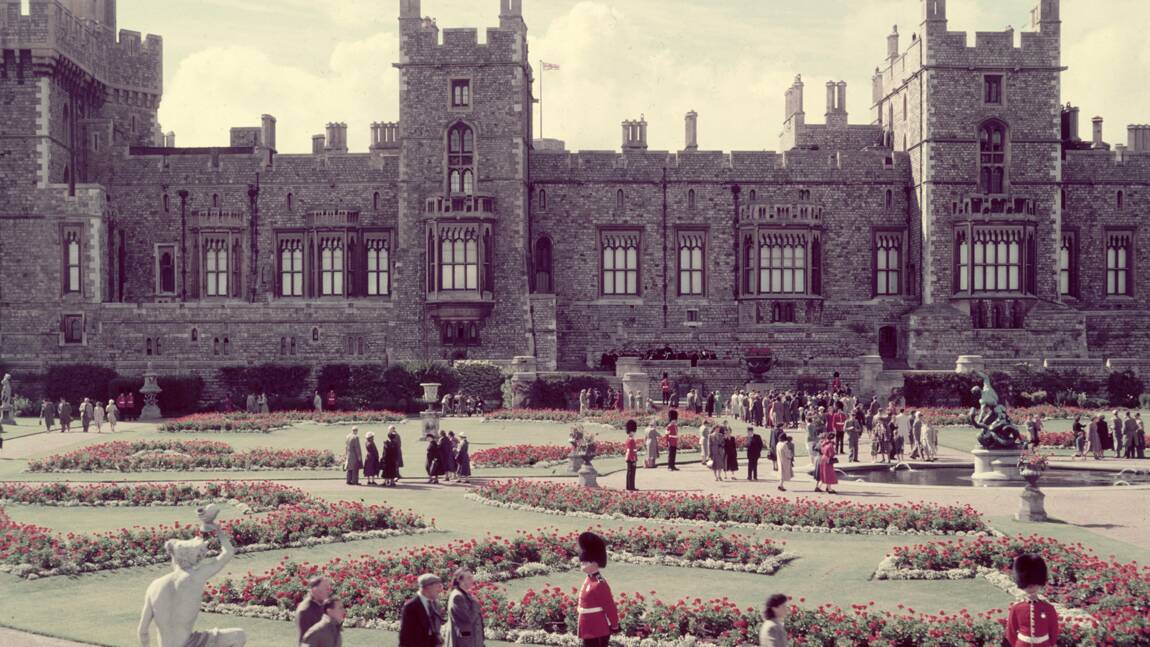 Of the 47 countries in Europe today, 46 of them currently require government-issued photo IDs to vote

… in 2005, the Carter-Baker Commission on Federal Election Reform issued a report that proposed a uniform system of requiring a photo ID in order to vote in U.S. elections. The report also pointed out that widespread absentee voting makes vote fraud more likely. Voter files contain ineligible, duplicate, fictional, and deceased voters, a fact easily exploited using absentee ballots to commit fraud. Citizens who vote absentee are more susceptible to pressure and intimidation. And vote-buying schemes are far easier when citizens vote by mail.

… It was a truly bipartisan commission that made what seemed at the time to be common sense proposals.

How things have changed. Some of the Commission’s members, Jimmy Carter among them, came out [in 2020] to disavow the Commission’s work. And despite surveys showing that Americans overwhelmingly support measures to ensure election integrity—a recent Rasmussen survey found that 80 percent of Americans support a voter ID requirement—Democratic leaders across the board oppose such measures in the strongest terms.

But the fact is that the U.S. is an outlier among the world’s democracies in not requiring voter ID. Of the 47 countries in Europe today, 46 of them currently require [the common-sense policy of] government-issued photo IDs to vote.

When it comes to absentee voting, we Americans, accustomed as we are to very loose rules, are often shocked to learn that 35 of the 47 European countries—including France, Italy, the Netherlands, Norway, and Sweden—don’t allow absentee voting for citizens living in country. Another ten European countries—including England, Ireland, Denmark, Portugal, and Spain—allow absentee voting, but require voters to show up in person and present a photo ID to pick up their ballots. It isn’t like in the U.S., where a person can say he’s going to be out of town and have a ballot mailed to him.

England used to have absentee voting rules similar to ours in the U.S. But in 2004, in the city of Birmingham, officials uncovered a massive vote fraud scheme in the city council races. The six winning Labor candidates had fraudulently acquired about 40,000 absentee votes, mainly from Muslim areas of the city. As a result, England ended the practice of mailing out absentee ballots and required voters to pick up their ballots in person with a photo ID.

Up until 1975, France also had loose absentee voting rules. But when massive vote fraud was discovered on the island of Corsica—where hundreds of thousands of dead people were found to be voting and even larger-scale vote-buying operations were occurring—France banned absentee voting altogether.

On the topic of buying votes, I should point out that we in the U.S. did not always have secret ballots. It wasn’t until 1880 that the first state adopted the secret ballot, and the last state to adopt it was South Carolina in 1950. Perhaps surprisingly, when secret ballots were adopted, the percentage of people voting fell by about twelve percent. Why was that? Prior to the adoption of the secret ballot, lots of people would get paid for voting. In those days, people voted by placing pieces of colored paper in the ballot box, with different colors representing different parties. Party officials would be present to observe what color paper each voter put into the box, and depending on the color, the voter would often get paid. Secret ballots put an end to this practice.

France learned in 1975 that the use of absentee ballots led to the same practice—it allowed third parties to know how people voted and pay them for voting a certain way. This same problem is now proliferating in the U.S. in the form of “ballot harvesting,” the increasingly common practice where party functionaries distribute and collect ballots.

… How about our neighbors, Canada and Mexico? Canada requires a photo ID to vote. If a voter shows up at the polls without an ID, he is allowed to vote only if he declares who he is in writing and if there is someone working at the polling station who can personally verify his identity.

… Those who oppose election integrity reform here in the U.S. often condemn it as a means of “voter suppression.” But in Mexico, the percent of people voting rose from 59 percent before the reforms to 68 percent after. It turned out that Mexicans were more, not less, likely to vote when they had confidence that their votes mattered.

If the rhetoric we hear from the Left today is correct—if voter ID requirements and restrictions on absentee (or even mail-in) voting are un-democratic—then so are the countries of Europe and the rest of the developed world. But this is utter nonsense.

Those opposing common sense measures to ensure integrity in U.S. elections—measures such as those recommended by the bipartisan Carter-Baker Commission in 2005—are not motivated by a concern for democracy, but by partisan interests.

I made this very point in a post 10 years ago (during the election of 2012), which I updated in 2021. If America is "racist" for its (common sense) election laws, then so is just about every country in Europe and, indeed, on the planet: 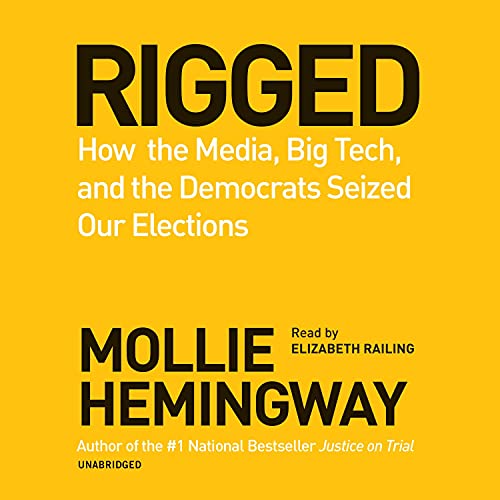 Also from Hillsdale College's free speech digest, Imprimis: “Zuckerbucks” and the 2020 Election by Mollie Hemingway, author of Rigged (How the Media, Big Tech, and the Democrats Seized Our Elections)

Months after the election, Time magazine published a triumphant story of how the election was won by “a well-funded cabal of powerful people, ranging across industries and ideologies, working together behind the scenes to influence perceptions, change rules and laws, steer media coverage and control the flow of information.”  Written by Molly Ball, a journalist with close ties to Democratic leaders, it told a cheerful story of a “conspiracy unfolding behind the scenes,” the “result of an informal alliance between left-wing activists and business titans.”

… The plan by Democratic strategists to bring activist groups into election offices worked in part because no legislature had ever imagined that a nonprofit could take over so many election offices so easily. “If it can happen to Green Bay, Wisconsin, sweet little old Green Bay, Wisconsin, these people can coordinate any place,” said Janel Brandtjen, a state representative in Wisconsin.

She was right. What happened in Green Bay happened in Democrat-run cities and counties across the country. Four hundred million Zuckerbucks were distributed with strings attached. Officials were required to work with “partner organizations” to massively expand mail-in voting and staff their election operations with partisan activists. The plan was genius. And because no one ever imagined that the election system could be privatized in this way, there were no laws to prevent it.

More related:
• Democrats don't support voter fraud; they just worry about disenfranchising the deceased
• Voter ID: Apparently not allowing minorities to cheat is a form of racial oppression
• Let’s dispense with the myth that liberals are really against voter fraud; Voter fraud is actually an essential part of their election strategy
• If the Democrats learned anything from their 2016 debacle it’s that they didn’t cheat nearly enough
• Isn't America Being Governed by a Mafia Family Dynasty, setting things up so that there will always be Democrats in power?
• Inside of a month, Democrats have redefined riots and election challenges from the highest form of patriotism to an attack on democracy — And by “democracy”, they mean the Democrat Party
• Voter Fraud: A Note to Leftists Who Claim that "Not a shred of hard evidence has been produced"
• Dennis Prager: The Numerous (and Sweeping) Anomalies Regarding the 2020 Election That Cannot Be Ignored