The Real Threat to Democracy: It’s a Travesty to Compare the Capitol Siege to 9/11 explodes Debra Burlingame in the Wall Street Journal. The sister of a pilot on American Airlines flight 77, she is a founding board member and trustee of the 9/11 Memorial and Museum Foundation doubling as a director of the National Medal of Honor Museum Foundation.

“I would like to see Jan. 6 burned into the American mind as firmly as 9/11, because it was that scale of a shock to the system,” commentator George Will said recently. The attempt to reconfigure the “domestic terrorist” narrative to fit the horrifying story of Sept. 11 is profoundly disheartening.

These two events are fundamentally different in nature, scope and consequences. Mentioning them in the same breath not only diminishes the horror of what happened on 9/11; it tells a false story to the generation of Americans who are too young to remember that day nearly 20 years ago.

… Members of Congress might have had a frightening day on Jan. 6, but on 9/11 some 200 people in the World Trade Center towers chose to jump from 80 to 100 floors above the ground rather than be consumed by fire. A woman waiting at a lobby elevator bank was burned over 82% of her body when jet fuel from the first plane sent a ball of fire down the elevator shaft and into the lobby. She spent three months in a hospital burn unit and was permanently disfigured. There are countless harrowing stories like this—of death, destruction and heartbreaking loss. More than 3,000 children lost parents. Eight young children were killed on the planes. Recovery personnel found 19,000 human remains scattered all over lower Manhattan from river to river, including on rooftops and window ledges. Victims’ remains were still being recovered years later by utility workers and construction crews.

… The attack brought down our nationwide aviation system, shut down the New York Stock Exchange for days, destroyed or rendered uninhabitable 16 acres of Lower Manhattan including underground subway and commuter train lines and destroyed a section of the Pentagon. Rebuilding at ground zero is still incomplete, and U.S. troops are still in Afghanistan.

On Jan. 6, Congress resumed its session that evening.

It is deeply offensive and sad that the brutal and harrowing memories of the worst terrorist attack in American history are being deployed by political partisans. They are using 9/11 not as an example of what the American people endured and overcame together, but explicitly to divide, to stoke hatred and to further a political agenda aimed at stigmatizing the other party and marginalizing ordinary Americans from participating in the political process. That is the real threat to democracy.

It should matter that the vast majority of the people who went to the Capitol protest that day didn’t believe they were there to overthrow the U.S. government, or, it must now be said, to kill anyone.

There have been real terrorist attacks on the Capitol. But those must be forgotten because they came from the political left.

… In 1954, four Puerto Rican nationalists opened fire with automatic weapons from the House visitors gallery with members in the chamber for a quorum call. Five representatives were wounded, including one, Alvin Morell Bentley of Michigan, who was hit in the chest. The perpetrators received sentences ranging from 50 to 75 years; one was released in 1978, and President Carter granted clemency to the others the following year. One week after the shooting, the House was back to business as usual. That was a time when more members of Congress had served in the military, and with the world still recovering from World War II, one doubts that anyone likened the attack to Pearl Harbor or the Battle of Iwo Jima.

We are living in perilous times. When a modern democracy deploys forces of intimidation—whether government, corporate media or cultural institutions—to promote the ruling majority’s propaganda, it is time for good people to stand up and object. The world-changing attack of Sept. 11, 2001 shouldn’t be used, either as precedent or moral authority, to create a commission whose sole purpose is to turn a straightforward law-enforcement failure into destructive political theater.

Calling the 1-6/9-11 comparison "obscene [in addition to] yet another example of the narcissism of our ruling class," Glenn Reynolds goes on to predict that

With the passage of time, more Americans will feel that the problem with 1/6 was that it didn’t go far enough.

Republicans who revel in virtue signaling and in sabotaging their colleagues: why are people who claim to be on the right so eager to become pawns for their (unscrupulous) adversaries? 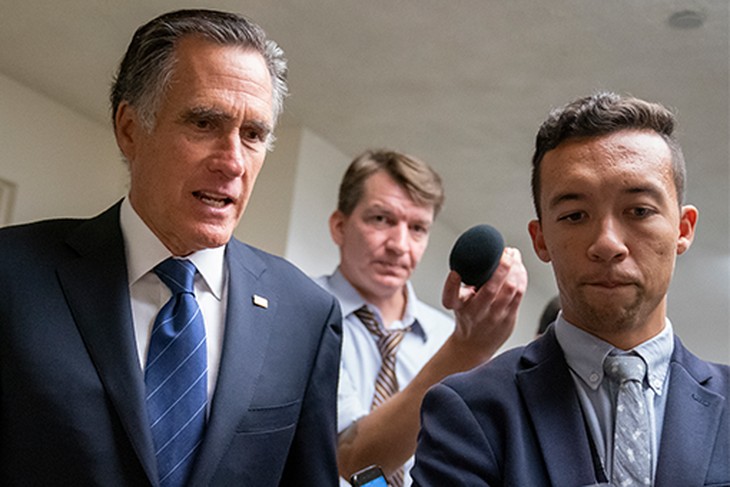 Following Liz Cheney’s lead, [Mitt] Romney has come out in support of a “January 6th commission,” which will serve as nothing more than a partisan battering ram for the Democrat Party going into 2022.

Noting, tongue-in-cheek, that in "a completely unexpected, never-before-seen move, Mitt Romney has decided to bend the knee and do the left’s bidding", Red State's Bonchie goes on to register how appalling the Utah senator's move is (thanks to Ed Driscoll).

… there’s no reason for any Republican to support this clearly partisan nonsense. The commission is set up in a way where Democrats would choose the investigators, essentially making it the Mueller investigation — part two. One of the cardinal sins a GOP politician can make is purposely playing into the hands of the left, and Romney and Cheney are chomping at the bit to do so.

… For the life of me, I don’t understand why people who ostensibly claim to be on the right are so eager to become pawns for their political adversaries. Democrats play for keeps, and you never see them break ranks like this. Yet, Romney, Cheney, and a handful of other GOP Senators and Representatives seem intent on proving they have no strategic sense whatsoever. Again, there is no logical reason for Congress to get involved here. What are they going to do except call partisan witnesses to preen for the cameras? Any real investigation will happen at the law enforcement level, but even then, you can expect that to be largely slanted given how infiltrated the ranks are at the FBI and DOJ.

… Romney’s chief reason for existing is to virtue signal, though. Abortion, censorship, stupid foreign wars, etc.? He’s not really into that, but give him a chance to dump on his own party, and he’s always down.

A political party can’t function like this. You can not have members who revel in sabotaging their own colleagues.

Related: Why Are Conservatives So Naïve That They Refuse to See the Beam in the Eye of Those Who Hate Their Very Existence?