Is Discrimination OK? It Depends Whether You Are a Boy Scout or a Girl Scout

Starting in 2016, judges in California will be forced to hang up their scoutmaster hats or lose their jobs

In 2000, the Supreme Court upheld the right of the Boy Scouts, and every private club, not to be forced by government to accept members that it doesn’t want.

Liberals didn’t like that decision and have spent the ensuing fifteen years trying to formulate alternative strategies to pressure the Boy Scouts to change, all the while pretending that they respect the right of the Boy Scouts as a private organization to freely associate. Which they don’t. They merely lost their case in the highest court and had to resort to plan B—ostracizing.

Their newest tactic is to tell judges what they’re allowed to do when off the clock. Oh no! A judge might be teaching youth the importance of trustworthiness, courtesy, and thrift, to name just three of the Scouts’ values.

… Organizations that remain in liberals’ good graces are given a pass to discriminate as they see fit.

If the ethics code were interpreted to mean what it clearly says it would also prohibit membership in the Girl Scouts of America. The GSA discriminates against both boys and adult men who want to become leaders. A troop in Colorado made an exception for a boy who “identifies” as a girl though the decision was a one-time policy exception made at the local level. In any case, the troop didn’t decide that they would allow this boy to join because they’re now hip to boys, they decided to participate in the boy’s delusion that he’s actually a girl. So in their minds the new member was a girl…who happened to be a boy.

This stuff gets really confusing.

And then there’s still the issue of banning adult men from being Girl Scout leaders. It’s a perfectly sensible policy, mind you, but it’s a policy that nonetheless runs afoul of California’s judicial code of ethical behavior. The code doesn’t make an exception for clubs that think they have a “good reason” to discriminate based on the aforementioned protected categories. Every club that discriminates thinks that their reason for doing so is valid. The code nonetheless stipulates that California judges may not belong to that club. No one in their right mind, however, truly believes that the code will be enforced fairly and equally. BSA bad, GSA good.

Why is the GSA good? For starters, they allow homosexual leaders. They have also shed most of their religious identity, and now inculcate girls with feminist values. God is out, lesbianism and abortion are in.

The two policies are both rooted in the same concern for children’s safety. Neither club wants adults diddling kids.

…  The irony of a nondiscrimination policy being enforced in a discriminatory manner is palpable. California’s policy is stupid, and everyone knows it’s stupid too, which is why no one will actually follow it, much the same way no one actually follows the vaunted Civil Rights Act of 1964. The utility of such laws/codes is to have a handy weapon around with which to bludgeon people liberals don’t like. …

To the New York Times, Greece's Far Right Remains the "Far Right" Whilst Its Victorious Far Left Is Reassuringly Changed to Simply the "Left" 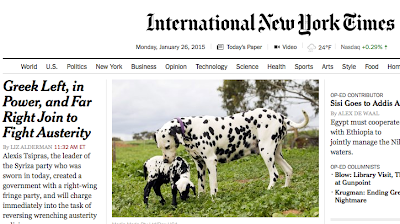 Typical: In the New York Times' cover headline linking to the Liz Alderman story of the Greek government's new coalition members, the far right remains the "Far Right" while the far left is reassuringly renamed simply the "Left".

FYI, regarding the animal photo, here is Erica Goode's story on unlikely animal friendships…
Posted by Erik at 10:30

A Virgin Galactic rocket plane known as SpaceShipTwo crashed in the Cantill area of the California Mojave desert during a test flight,


leaving one pilot dead and another injured.

… “Virgin Galactic’s partner Scaled Composites conducted a powered test flight of SpaceShipTwo earlier today,” the company website’s stated Friday. “During the test, the vehicle suffered a serious anomaly resulting in the loss of the vehicle. Our first concern is the status of the pilots, which is unknown at this time. We will work closely with the relevant authorities to determine the cause of the accident and provide updates as soon as we are able to do so.”

… Onlookers who spotted the craft crumble from the sky reportedly saw a sky-high explosion and later found debris scattered across the desert sand. The Kern County Fire Department that responded to the crash did not answer its communication line.

Update: several hours after this story was posted, other news outlets still have no story on this, so we are starting to wonder if NP (and Jeffrey Scott Shapiro) wasn't (weren't) taken in by a hoax
Posted by Erik at 18:32

Is there no one in Francois Hollande's entourage with the courage to say, sorry but this is a one way-autoroute to absurdity?


– politicians get to live their dream of ultimate power and it turns so quickly to nightmare.

And the sad thing in [Francois Hollande]’s case is that, leaving all political allegiances aside, only one of the nightmares was really his fault. The problem was that this one mistake was all-embracing.

The question I’ve been asking myself all year, or rather most of the time since he was elected, is: how has he managed to surround himself with such a bad gang of advisors?

I thought this most recently when Le Président went to Kazakhstan in early December, and someone allowed him to be photographed wearing local costume, which doubtless looks great when you’re riding a Mongolian pony across the steppes, but less so when you’re a small Frenchman swamped in a fur hat and mountainous overcoat, and standing next to the Kazakhstani president who is looking comfortable in his sharp French-style  suit? Which member of M. Hollande’s entourage said ” oh oui, a photo opportunity as an exhibit in a folklore museum, bonne idée”?

More importantly, why did no one say it was a terrible idea and steer him clear of trouble?

But by then, it was no longer a surprise. After all, the year started terribly with the magazine article revealing that France’s president had thought that it was a clever idea to borrow a love nest a few metres outside the presidential palace and drive there on the back of a scooter to meet his mistress – when he was already being criticised for installing a high-maintenance unmarried First Lady in his official residence? Honestly, is there no one in his entourage with the courage or the nous to say, sorry but this is a one way-autoroute to absurdity?

… speaking of the economy, what kind of Socialist president is so badly advised that he nominates a minister of commerce who is then forced to resign when accusations are made that he has been less than scrupulous about paying his income tax? This happened in September when Thomas Thevenoud stepped down – after only nine days in the job. Did no one check out his CV? Did no one say, we’re Socialists, so let’s spend five minutes seeing if the candidate has the right credentials? The answer is apparently non. All of which must make 2014 a year that M. Hollande might want to skip over when he writes his autobiography.