A fellow going by the name of Budd Whitebook has a handful of funny quips for the Economist from Washington DC, and since they only occurred between 2005 and 2008, I wonder if the weren't mailed in from some diplomat (from some British diplomat?) stationed there and writing under a pseudonym.

Here is a typical example:


SIR – Lexington writes that “Bill Clinton was brought to his knees by Monica Lewinsky” [July 16th, 2005]. I had always thought it was the other way around, the vice, in this case, being versa.

“Do you believe being gay is strictly genetic?” Sorba asked. The responses he received certainly didn’t carry the Dan Savage seal of approval.
… When asked if “being gay” was strictly genetic, [one man] said it was not. “The thing is, I was never gay. Now I am, and I’m proud. I am who I am now.” When Sorba asked another man, “So you believe you became gay from the culture?” he responded, “Yeah, but I’m proud of it.” An older man declared categorically that “None of us were born gay.”


… The idea that people choose homosexuality, or that it might be the result of negative environmental factors such as sexual trauma, is often portrayed as the ramblings of clueless straight people who are almost uniformly religious and uncomfortable with modern science; people like Michele Bachman and Ben Carson, for example. How odd it is then to hear homosexuals talking very much like Ben Carson, or at least admitting that he’s right.


This just in: sex is a volitional behavior. How anyone can be shocked this revelation is beyond me.

… Why is the genetic basis of homosexuality so important? Plenty of homosexuals will admit that the “born that way” message carries certain political benefits that are just too important to forgo. Dr. Lillian Faderman, a professor of lesbian literature, let slip an inconvenient truth in the pages of The Advocate, a homosexual newspaper. “The concept of gay and lesbian identity may be nothing but a social construct,” she wrote, “but it has been crucial, enabling us to become a political movement and demand the rights that are due to us as a minority. What becomes of our political movement if we openly acknowledge that sexuality is flexible and fluid, that gay and lesbian does not signify ‘a people’ but rather a ‘sometime behavior’?”

Fascism then is that system that maintains the facade of private property, but what you end up having is this bizarre marriage of business and state

Fascism is an economic system that marries the state to business, where business holds the title but state holds control.


Some of you, though I trust not all of you, are familiar with what we call “Godwin’s law.” This is a particular law which is born out of empirical study of the Internet and it holds that, given enough time, any and all internet arguments will eventually involve some side of the argument accusing the other side of the argument of either being like Hitler or of being a Nazi. The corollary to that is that the first one to make that observation loses the argument.

… The problem is, however, that because we don’t know what fascism is, and because we associate it with a bunch of accidental trappings to it, we miss it when it comes us.

Fascism is an economic system that is distinguished from socialism or communism in a very narrow way. Don’t forget that, while we like to present fascism as the hard right on the political spectrum and communism as the hard left on the political spectrum, fascism is a socialistic concept. The name “Nazi” stands for the “National Socialist Party.” What distinguishes the fascists and the communists is not socialism or not-socialism but rather national socialism versus international socialism.

There is also this critical distinction: communism exists as a theory that suggests that the only way to have economic justice is not merely to divvy up the fruit of production equally among all members of society, but that it is about ownership of the means of production. This has to be universal or ultimately in the hands of the state. The state owns the means of production.

Now if we know much at all about what ownership is, what property is, we would recognize that essential to the concept of “property” is control. If you control my car, you drive it, you fill it with gas when you want to fill it with gas, you change the oil when you want to change oil, but you let me hold onto the title in my file cabinet at home then I don’t really own that car, you own that car. Ownership requires control. Fascism then is that system that maintains the facade of private property, but what you end up having is this bizarre marriage of business and state. Where the business is protected by the state, the business is shielded from competition, guaranteed of profits but ultimately controlled by the state.

Does this, I wonder, sound awfully familiar to anyone? Fascism allows us to own property, but it tells us what we have to pay those who work inside our factory. It tells us what percentage of this material we must include in the thing that we make. It tells us how many hours people are allowed to work. It tells is this and it tells us that until finally you are left with the obvious conclusion that the state owns what we think we own because it controls all that we have.

Friends, we don’t have a socialist economy here in United States, despite all the squawking and screaming about President Obama. Nor do we have a free market, despite what we would like to believe or what we once might have enjoyed. What we are living in, economically speaking, is fascism where property is held privately in name only, but controlled by an army of bureaucrats from the central government.

This is one reason why we are called to love and to seek liberty because fascism is a betrayal and assault upon the right of property–a right which was given to us by God Himself. That is what our founding documents say and, more importantly still, that is what the ten commandments say. Fascism isn’t just bad economics, it is theft.

Related: Mitt Hitler and Double Standards: Godwin's Law Applies to Thee, But Not to Me
Posted by Erik at 10:03 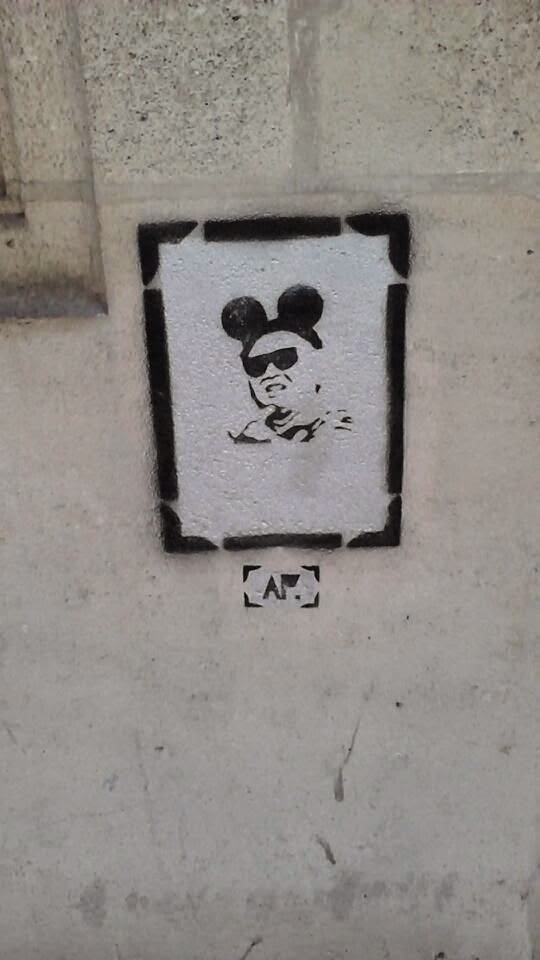 Some Thoughts on American Patriotism…
Posted by Erik at 07:34

As a commuting expat, I regularly take the Eurostar to Paris and then the TGV south-west


so I’m well used to seeing the hundreds of metres of graffiti plastered across the embankment walls of the approaches to Gare du Nord, the Paris terminus and the Gare Montparnasse, which services destinations such as La Rochelle and Bordeaux.

To be honest, I quite like it. It speaks of a generation of youthful rebellion. But any other message the graffiterati may have tried to convey is really lost on me.

Having studied the sprayings of both the Eurostar approach to Gare du Nord and the TGV exit from Montparnasse all they seem to be concerned with is expressing their graffiti ‘handle’ or nom de plume.

… When you compare this with the approaches to St Pancras in London – where there doesn’t seem to be a single name, word or political statement scrawled on any wall – I’m not sure which I’d rather have. Cities must be welcoming, but they should also provoke, energise and challenge the senses.