Another Conspiracy Theory Comes to Light

• Incredible — Biden "shouldn't laugh at Ryan's flim-flam" acknowledges
Andrew Sullivan (but only once, as far as I can see)
who goes on to claim that "this was a solid win for Biden" (?!)
http://andrewsullivan.thedailybeast.com/2012/10/live-blogging-the-biden-ryan-debate.html
and that "The star" of the debate was… Raddatz (!?)

• "you probably detected my frustration" (you don't say, Joe?!)

• Ryan: "that's what we get in this administration — speeches!" Not policies…

• Sarah Hoyt http://pjmedia.com/instapundit/153669/
"ED — AT ACE THEY SAY BOTH THE MODERATOR AND BIDEN ARE YELLING AT RYAN: Is this working for ANYONE?  Is it only to our partisan lens that this sounds like bullying?" …

• What must Andrew Sullivan be thinking?!

• When Ryan wants to reply, Martha Raddatz (again) goes "I'd like to move on"

• Instapundit http://pjmedia.com/instapundit/153665/ :
WHAT [Glenn Reynolds is] GETTING FROM ALL [his] FRIENDS: Biden is either acting like the village idiot or a bar heckler.  Is this playing well to anyone?  And the moderator… seems to be immoderately biased.  …

• I can't believe it — Ryan is speaking,
and noone is interrupting him

• The Martha Raddatz interruptions are even
more irritating than Joe Biden's — interrupting
Ryan much more often than the VP, if I'm not mistaken

• Honestly, guys — honestly!
Does anyone in the liberal camp really think that Biden is winning?!

• Biden won't let any opinion but his own to be mentioned
— a true liberal!
But:
Poor White House (sigh)

• "Follow your instincts, folks"
I concur with VP Joseph Biden.

• Didn't anyone in the WH tell Biden to hold back on his laughter?!
And not show scorn for his opponent?!

• Biden is reminding me of my worst teachers, in both school and college,
who would ask students (his inferiors) to share, and would then mock
their sharing if they didn't agree with their own higher-than-thou opinions
— I mean, their divine knowledge

• Translation of Biden's attitude: "No argument but mine is worth anything!"

• Obama appeared like a distant professor;
Biden appears like a sneering professor mocking his freshmen and sophomores

• TRULY, THIS ATTITUDE SHOWS THAT FOR OBAMA, BIDEN, AND THE LEFT,
THE ONLY TRUE ENEMY OF THE WHITE HOUSE AND THE DEMOCRATIC PARTY
(AND AMERICA AND, INDEED, THE WORLD) ARE CONSERVATIVE AMERICANS

• Huge smile over Biden's face again
while speaking about… Iran's weapons;
then outburst of laughter

• Does Biden not know he is on a split screen?!

• Who's the liar?!
"We were not told they wanted more security" (Biden)

• "This [Obama] is the guy who has repaired our alliances" (BIden)
Like with Poland's Walesa? And Tibet's Dalai Lama
(Barack Obama's fellow peace prize recipients)?

• BIDEN SMILING?!?! Is Biden's smile going to go over better than Obama's sneer? (I doubt it!)

• Outstanding — Ryan mentioning that even the ambassador in Paris has a marine detachment, but not the one in Libya?!

No Pasarán will be blogging the vice-presidential debate in this spot (starting at 3 AM in the morning Paris time)…
Posted by Erik at 00:48

is being re-broadcast daily at 6 pm Paris time (at noon, New York City time) this week on the la Locale TV station…

In the Days of the Hangman: Assad and the UN Before Syria's Bloody Tree and Leaves 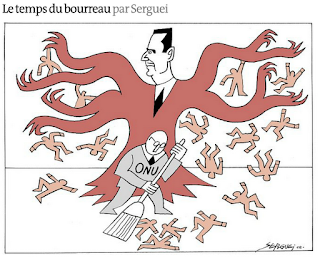 Like his pal Plantu, Serguei probably doesn't realize it, but his Syria cartoon is just as critical of the United Nations as America's criticized conservatives and its equally demonized neocons are.
Posted by Erik at 19:18

As Le Monde is forced to admit that Mitt Romney is gaining momentum in the polls, and as Corine Lesnes feels it necessary to point out that Barack the "Magical Negro" (she uses the two-word term "Nègre magique" herself, as well as that of the "super-hero black man" or the "Noir super-héros") may have been overrated, Olivier Dassault pens an op-ed in which the UMP Member of Parliament (MP or député) ties Romney's negative reputation to anti-Americanism.

In Afghanistan, the "Americans are increasingly going to be spectators. There’s no more money. We’re seeing America’s retreat into itself"

In his speech at the Republican National Convention, Mitt Romney avoided any mention of the war in Afghanistan

wrote John Vinocur in his International Herald Tribune column prior to the governor's speech on foreign policy.

A week later, in accepting the Democratic presidential nomination, Barack Obama gave a pass to the word “success” in describing the outcome of what he had once called the “war of necessity.”

The president asserted instead that “we’ve blunted the Taliban’s momentum.” That’s a retreat from “breaking the Taliban’s momentum” —  the specific task Obama attached to announcing a surge of 33,000 troops to fight the officially right and good war in December 2009. And a step back from an objective that the incumbent had pointed to this May 1 as a mission accomplished.

Romney? In his clearest statement on Afghanistan, made in January, he said, “We should not negotiate with the Taliban. We should defeat theTaliban.”

No plan explaining how to do that has been offered by the Republican challenger. At the same time, he maintains — in tune with Obama’s timeline for withdrawal — that almost all U.S. troops should be out of Afghanistan in 2014.

… For months, Romney, alongside Obama, has sustained the nondiscussion of a double concern that allied officials see in the presidential election: whether America is now inured to failing to win its good wars, and how much of an obligation remains in the minds of its two presidential candidates that the United States must function as global good cop and ultimate recourse in maintaining international stability.

Six years ago, Obama wrote that not only would the United States have to continue in its sheriff role, he insisted that “this will not change — nor should it.”


… This is more certain: No one running for president shows any inclination to talk about what becomes of a broken, corrupt and prospectively dysfunctional country after 2014. Or the enormous costs that would be tied to Afghanistan’s continued maintenance by the United States and its allies. Or, in the end, what the candidates’ flight from focusing more sharply on the war says to the world about the wavering status of America as the single global force able to say no to chaos.

It tells us “that this is a much less safe world.” The phrase belongs to Pierre Lellouche, who served as the former President Nicolas Sarkozy’s special representative for Afghanistan and Pakistan.
He said: “The Americans are increasingly going to be spectators. There’s no more money. We’re seeing America’s retreat into itself, with no more boots on the ground, but a reliance on military technology like drones.”

"Mister (Fake) Cool" is how Barack Obama now appears to Le Monde Magazine, as Corine Lesnes shows some of the less savory aspects of the man occupying the Oval Office. "A perfectionist, aloof, sore loser, so sure of himself as to be condescending: such is the unknown side of the man nicknamed 'Mr Cool'. An image a thousand leagues from the informality which seduces so many Europeans."

Liberals fret: Is Obama bored? Does he even want a second term? | Mobile Washington Examiner
Posted by Georges at 19:21 No comments:

Plantu celebrates his 40th anniversary at Le Monde with an interview by Frédéric Potet,

a portfolio of over two dozen of his 19,000 cartoons through the years, and an entire issue without a single photograph but laden exclusively with Jean Plantureux cartoons — the very first of which, in 1972, featured his famous peace dove and concerned, to no one's surprise, the Vietnam war.

One of the portfolio images shows, incredibly enough, Saddam Hussein's Iraq at a time (in 1990) when the butcher of Baghdad was known to have weapons of mass destruction (which it used on its own Kurds) and to torture children in Baghdad prisons; at a time when the United Nations was not being praised to the skies for its alleged role as the neutral arbiter of what constitutes human rights as well as of what constitutes rightful military intervention; and at a time, naturally, when America was not being demonized for having the temerity of invading Iraq to overthrow the perpetrator of those crimes.