"Old" Europe’s anti-American impulse never in fact went away; At most, it merely went into a latent state, awaiting the proper conditions to become virulent again

During the decade of the naughts and the two administrations of George W. Bush, Europe was seized by a veritable paroxysm of anti-Americanism

noted John Rosenthal a few years ago in regards to a German news report about "An Entirely Normal American" (Christine O'Donnell) or, rather, more loosely translated, "An Entirely Average American, a Simpleton Like the Rest of 'Em".

More precisely, this was the case for the “old” European core of Germany and France, as well as the neighboring countries most influenced by the latter. Back in the day, several “euro-blogs” documented the phenomenon on a nearly daily basis. These included Davids Medienkritik, focusing on Germany, No Pasarán, focusing on France, and my own Transatlantic Intelligencer. In the meanwhile, since the election of Barack Obama, the subject of European anti-Americanism is rarely touched upon even in new media and one could well have imagined that the phenomenon itself had simply disappeared.

But as the reactions of leading French and German newspapers to the Tea Party and the prospect of large Republican gains in the upcoming congressional elections make clear, “old” Europe’s anti-American impulse never in fact went away. At most, it merely went into a latent state, awaiting the proper conditions to become virulent again.

Consider, for instance, the sub-head of a recent article in the German daily Die Welt on Christine O’Donnell as the supposed “nightmare opponent” [Angstgegenerin] of the Democrats: “Christine O’Donnell is even simpler than Sarah Palin — but the Democrats are afraid of her.” When applied to persons, as it is in this context, the German adjective simpel carries a strong whiff of “simpleton.”

Lest it be imagined that the crack is reserved for just O’Donnell and Palin and might somehow be construed as sparing their supporters and/or Americans more generally, the front page features a distinctly unflattering photo of a seemingly unhinged and cockeyed O’Donnell, accompanied — with a wink and a nudge — by the headline: “An entirely normal American.” (In an allusion to O’Donnell’s now famous “I’m You” ad, the teaser-text states that this is what O’Donnell claims to be. But it then quickly adds that “ordinary people [literally, ‘people in the street’]” are indeed enthusiastic about her, thus lending credence to the claim.)


Above is the October 18 [2010] front page of Die Welt, one of Germany’s leading newspapers. It should be noted that of all Germany’s major dailies, Die Welt is probably the least prone to anti-American excesses.

Western intellectuals have long had a soft spot for Russia

writes Slawomir Sierakowski in a New York Times contribution entitled Putin's Useful Idiots. In the past century, following in the footsteps of Voltaire and Johann Gottfried von Herder,


intellectuals like André Gide, Pablo Neruda and Jean-Paul Sartre all stumped for the Soviet Union as what Lenin allegedly called “useful idiots,” apologizing for its monstrosities long after the rest of the world recognized them.


To those in the Eastern Europe left — myself included — who know Russia better than most, such naïveté has long been a source of chagrin. And yet it continues, even today, as many American and Western European intellectuals do all they can to minimize the dangerous aggression by Vladimir V. Putin.

Writing in The Nation, the Russia scholar Stephen F. Cohen argued that Mr. Putin was largely blameless for the conflict in Ukraine, that he had tried to avoid it but that the West had forced his hand. In Mr. Cohen’s eyes, the West has unnecessarily humiliated Russia by inviting countries like Poland, the Czech Republic and Hungary to join NATO.

Ukraine, he wrote, is part of Russia’s sphere of influence, so why can’t we just accept Mr. Putin’s proposal that Ukraine be federalized, with neutrality guaranteed in a new constitution?


Mr. Cohen’s defense of Russia’s sphere of influence overlooks the question of whether the countries that fall within it are there by choice or coercion. Ukraine is willing to be in the Western sphere of influence because it receives support for civil society, the economy and national defense — and Russia does nothing of the kind.

Mr. Cohen and others don’t just defend Russia; they attack the pro-democracy activists in Ukraine.

… Strangely, Western intellectuals seem unbothered by anyone who notes the similarity between their pronouncements and Russian propaganda. Indeed, they dismiss such charges out of hand. Zoltan Grossman, who teaches at Evergreen State in Olympia, Wash., writes that it is “wrong and irresponsible to assert that the presence of fascists and Nazis in the new government is merely Russian propaganda.”

For Dr. Grossman, inconvenient details are less important than the fact that Dmytro Yarosh, the leader of the far-right organization Right Sector, had been appointed deputy secretary of the National Security and Defense Council.

… What naïve American intellectuals say free of charge, the canny Gerhard Schröder, the former German chancellor, says for 250,000 euros a year as a board member of Gazprom, the Russian oil giant. Mr. Schröder, the German father of “Gazprom socialism” — a new subspecies of limousine liberalism — has repeatedly embarrassed Berlin by supporting Russia’s annexation of Crimea.

What drives these men? Is it a case of poorly conceived pacifism? An eruption of remorse for war crimes carried out against Russians, so many years ago? Or the Stockholm syndrome of a victim fascinated by his executioner?

Obviously, they are entitled to their opinions. But in speaking out this way they are doing great damage to Germany’s postwar government, built on a commitment to democracy and national self-determination, everything that is currently under attack by Mr. Putin.

The irony is that by standing beside Russia and pointing fingers at fascist phantoms in Ukraine, Western intellectuals are aligning themselves not just with the autocrat in the Kremlin, but the legions of far-right parties across Europe that have come to Russia’s defense, among them Hungary’s Jobbik, Vlaams Belang in Belgium, Austria’s Freedom Party, Italy’s Lega Nord and the French Front National. Who says Russia needs propaganda? It already has its useful idiots.

The Chickenhawk comeback embodies every liberal’s response to well-considered arguments: Shut up!

Two thousand four is back, y’all!

Kos, who has never been as relevant since those early days of the Iraq War, dragged out the old “chickenhawk” epithet again to describe anyone who thinks it’s kind of a raw deal, not to mention illegal under the circumstances, to swap five Taliban heavy-hitters for one traitorous soldier who risked the lives of his brothers in arms on several occasions. Said Kos on his blog: “It’s been a while since we’ve heard the squawking of those chickenhawks, always eager to send our people into combat, yet unwilling to serve their nation themselves.”

… His “chickenhawk” comeback is really just a warmed over version of every liberal’s response to well-considered arguments. Though it may take different forms at different times the gist is always the same: Shut up!

Kos is not a combat veteran. There’s nothing wrong with that; he claimed to have “missed deploying to the Gulf War by a hair.” He stayed behind in Europe because that’s where the Army wanted him to be.

You know who didn’t miss deploying by a hair? John McCain. He’s been a critic of the Obama-instigated Taliban jailbreak. Said McCain: “Do not trade one person for five hardcore, the hardest of the hardcore murdering war criminals who will clearly reenter the fight and send them to Qatar, of all places, where they will be free to roam, including to the Taliban headquarters there, and then after a year they will be allowed to go back into the fight in Afghanistan.”

… Markos Moulitsas became one of the world’s biggest bloggers when he did precisely because the Left needed a war hero on their team to call other people cowards and traitors. It is a sad commentary on the Left that the best they could come up with was Kos and, of course, John “Christmas in Cambodia” Kerry. Moulitsas’s service was honorable but not particularly remarkable or heroic, which makes his ten year marathon of macho posturing rather painful to watch, mostly for his sake. Obviously, no one has told him yet that he looks foolish.

Ten years ago, No Pasarán featured a major in-depth post on the subject :Shape Up, Shut Up, or Ship Out
Posted by Erik at 00:55 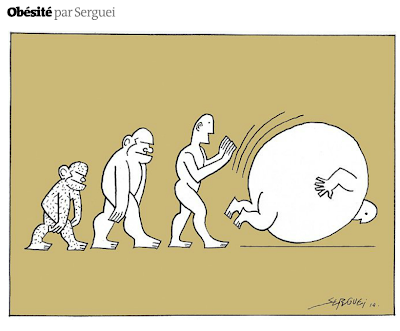 Serguei's take on evolution
Posted by Erik at 13:30