Our élites constantly lecture everyone about "disinformation," about "big lies", etc; They're the biggest liars of all, with zero accountability

Stacy McCain takes on the J6 Committee's Tantrum (thanks to Glenn Reynolds):

Listening to that, I was struck by how easily these hyperbolic phrases tumbled out of Raskin’s mouth [that of Rep. Jamie Raskin (D-Maryland)], as evidence of how insulated inside the echo chamber Democrats have become and, of course, the “journalist” Willie Geist is part of that echo chamber. He is as objective about the J6 Committee as my teenage daughter is objective about Harry Styles.

The predicate of the J6 “investigation,” the fundamental tenet of the belief system in which the Capitol riot was an “attempted political coup,” is that there is no reason to believe that the 2020 election was fraudulent. If no reasonable person could suspect that the election was stolen, then what happened on J6 was an illegal “insurrection,” an attempt to overthrow the legitimate government. Democrats and the media (but I repeat myself) are unwilling to hear the arguments made or to examine the evidence cited by those who claim that Biden was not legitimately elected. The bedrock assumption of Democrats is that Biden was elected in a landslide — 81 million votes! the most popular presidential candidate in history! — and thus they view any expression of doubt about Biden’s legitimacy as “insurrectionist” crazy-talk.

This is not how discourse in a democratic society is supposed to operate. Controversies over public policy would never occur, if we all shared the same set of beliefs, and so the fact that there is controversy about any subject (in this case, the legitimacy of the 2020 presidential election) requires a public hearing of arguments on both sides of the dispute, so that the electorate may be fully informed. The J6 Committee deliberately avoided such a discussion. Indeed, the whole purpose of this committee (which, by the way, lacks legitimacy under the normal rules of House procedure) was to criminalize doubt about the 2020 election.

It is one thing, when partisans on either side of dispute are seeking to rally their supporters, to make a one-sided argument in favor of a particular policy. This is entirely normal in politics. Yet the proceedings of a congressional committee are not supposed to be partisan rallies. Pelosi’s charade of phony “bipartisanship” — handpicking Trump-haters Liz Cheney and Adam Kinzinger as “Republican” members of the select committee, over the objections of Minority Leader Kevin McCarthy — cannot disguise the one-sided nature of the J6 Committee’s business. At no time in the operations of this committee has there been any fair consideration of the views of 74 million Americans who voted to reelect President Trump, 77% of whom think cheating affected the 2020 election.

… There is a world of difference between a protest motivated by a sincere sense of grievance and an “attempted political coup,” and yet at no time did the J6 Committee ever allow any consideration of the election doubts that inspired the events of J6.

Furthermore, and this is equally crucial, Democrats and the media absolutely refuse to recognize that the outbreak of violence at the Capitol in January 2021 was clearly inspired by the months of “Black Lives Matter” riots that broke out in May 2020 — riots that the Democrats enthusiastically applauded. Many millions of dollars of damage were inflicted, and many people killed or injured, during the weeks of arson, vandalism and looting which CNN reporter Omar Jimenez infamously described as “fiery but most peaceful” protests.

By applauding this destruction, Democrats thereby legitimized violent “protests,” and if the Capitol rioters believed there would be no repercussions for their actions on January 6 — well, why shouldn’t they believe that? Antifa thugs and mobs of urban looters had gotten away with criminal activity which everybody saw happening live on television throughout the summer of 2020, and Democrats never objected to those “mostly peaceful” protests.

Glenn Greenwald strikes back (thanks to Instapundit) in a Twitter thread:

The issue isn't so much NBC and CNN failed to cover the materials in the Hunter Biden laptop about *Joe Biden's* business activities in Ukraine and China (though that's true). The main issue is that both networks repeatedly *lied* about it by calling it "Russian disinformation."

I'll never stop talking about this and don't care if it's annoying. This is a huge journalistic scandal: almost every major news outlet ratified an outright lie to manipulate the 2020 election and - to this day - not one of them, not one, has apologized, explained or retracted.
This is why I say - and I mean - that these corporate news outlets and their employees deserve your deep contempt. They constantly lecture everyone about "disinformation," about "big lies", etc. They're the biggest liars of all, with zero accountability.

I promise you: if you talk to @HuffPost's political reporters and editors, they really believe they're the good guys, fighting disinformation, etc. etc.
Every time I say this - these corporate news outlets deserve your hatred and contempt - people in these outlets, including friends, DM me, upset. But tell me: how can you justify this? Everyone knows this was a CIA lie. Yet *not one of you* has admitted you broadcast lies.

Back in February 2020, nine months before the election, Caroline Glick wrote, presciently, that it all boils down to the politics of projection:

Since 2016, the Democrats have repeatedly projected all of their prejudices, malicious actions and plans onto Trump and the Republicans … [For instance] the collusion that Clinton and later the FBI, CIA, the Democrat Party, the media and a special prosecutor accused Trump of carrying out with the Kremlin was actually conducted by Clinton and her campaign with active assistance from the CIA, FBI, the media and the Democrat Party against Trump. In accusing Trump, they were describing their own actions.

… Since the impeachment hearings last January, Democrat lawmakers and aligned media have been pushing the claim that Trump will refuse to accept the election results if he loses. Just as Trump is repeatedly asked whether he condemns white supremacists, he and his campaign advisors have been asked repeatedly by reporters whether he intends to concede if the results of the election are not in his favor. At Tuesday’s debate, Wallace continued the practice. He asked the candidates to pledge to accept the election results.

… What is clear … is that if you want to understand who the Democrats are and what they are doing, all you need to do is look at what they are accusing Trump and his colleagues of being and of doing 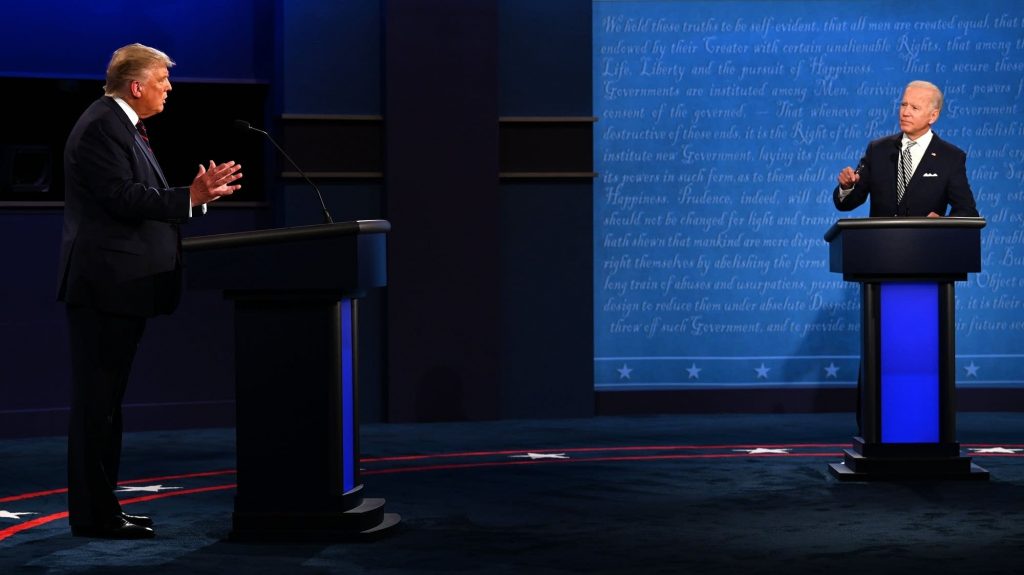 Related: • Of the 47 countries in Europe today, 46 of them currently require government-issued photo IDs to vote
• Joe Biden, Why Are You Calling Denmark a White Supremacist Country? And You, Barack Obama: Why Are You Calling Africa a Racist Continent?
• Democrats don't support voter fraud; they just worry about disenfranchising the deceased
• Voter ID: Apparently not allowing minorities to cheat is a form of racial oppression
• Let’s dispense with the myth that liberals are really against voter fraud; Voter fraud is actually an essential part of their election strategy
• If the Democrats learned anything from their 2016 debacle it’s that they didn’t cheat nearly enough
• Isn't America Being Governed by a Mafia Family Dynasty, setting things up so that there will always be Democrats in power?
• Inside of a month, Democrats have redefined riots and election challenges from the highest form of patriotism to an attack on democracy — And by “democracy”, they mean the Democrat Party
• Voter Fraud: A Note to Leftists Who Claim that "Not a shred of hard evidence has been produced"
• Dennis Prager: The Numerous (and Sweeping) Anomalies Regarding the 2020 Election That Cannot Be Ignored