The crudest rule of thumb is buying goods in the U.S. is often cheaper than the UK, but paying for services is far more expensive

Tourists flock to New York from the UK for shopping trips, seeing the US as a cut-price retail mall of their dreams with some spectacular buildings thrown in for good measure.

However, the reality for those of us who moved here permanently is rather different with many services costing considerably more than they do in the UK.

After arriving in 2013, and settling down in Maine, we soon found out that having no credit history in the US can make things a tad on the pricy side.

After comparing prices between the United States and the UK, The Daily Telegraph's David Millward brings it down to this:


Perhaps the crudest rule of thumb is buying goods is often cheaper than the UK, but paying for services is far more expensive.

… Of course goods are not subject to 20 per cent VAT and though sales tax exists in the majority of states, it is far more modest.

The real delight, of course is motoring. We bought a Ford Escape – the US equivalent of what is sold as a Kuga in the UK. It was about 25 per cent cheaper, saving us thousands of dollars.

Petrol is, of course, cheap as chips – especially now. It costs around £15 to fill up the tank.

… The good news for anyone living and working here is that income tax is lower, but we are paying twice as much in local taxes as we were in London.

Then there is the frightening cost of health care. We pay around £800 a month for a decent policy – and even then we are expected to chip in a substantial amount on top for any treatment we receive.

As I discovered, these bills are not cheap. A brief stay in hospital cost a few thousand dollars even after insurance.

In Arizona, John McCain is up for a challenge in the coming election to the U.S. Senate. By a military wife no less, one who describes herself as


a mom of three awesome kids … a family physician by trade … and … a former Arizona state senator.

During the CPAC weeekend, Dr. Kelli Ward was interviewed by Benny Huang:

HUANG: So … what motivated you to run against John McCain?

WARD: Well, lots of things. You know, I think that thirty years in Washington is way too long for anybody. I’m a supporter of term limits and, I have pledged myself that I wouldn’t stay more than two terms. Twelve years is a long time in Washington, DC. It’s a enough time to get some things accomplished, get some things started and then be ready to pass the torch on to the next generation of people who are studying and learning right now, who will have the abilities and the stamina and the energy necessary to continue our path, you know, our country on the right path.

I am a proponent of small government and low taxes and low regulations, much less regulations, a strong military, personal responsibility and the Constitution. And what I’ve seen from John McCain, especially over the last several years is that he’s a big-government, big-spending Republican  who doesn’t listen to his constituents, who has lost … the ability to remember who he works for. 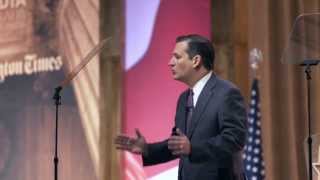 At CPAC, Ted Cruz held a rousing speech (that might be your No Pasarán correspondant whooping at, among — many — other times, 39:33 and 39:45) before being joined by Sean Hannity for a question-and-answer session.

About a minute after the Texas senator says (at 31:27) "I'll actually say a sentence that I suspect has never before been said at CPAC", your correspondent can be seen (in a tieless white shirt) in the third row towards the left of the screen (as well as at 3:03, 3:50, and 40:25). 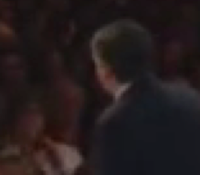 Immediately afterwards, when Cruz answers the Fox News reporter's question about the dire economic conditions facing the American people — "stagnation … misery … drowning in student loans with no hope of a good job" — your correspondent is the one adding Jimmy Carter's "malaise" to the list, immediately repeated by Ted Cruz (and earning a thumbs up from Sean Hannity) who proceeds to bring up the "accomplishments" of America's 39th president.

Enough of that; now watch the speech… 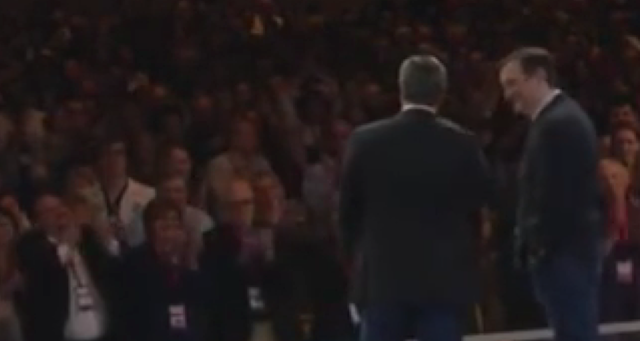 A Cry to Nancy Reagan: "Remember, We Love You!"

In June 2004, a No Pasarán blogger happened to be in Washington when Ronald Reagan passed away. A few days later, Joe N. headed down to the mall, joining the crowds for the funerary ceremony. The crowds were silent. Then Nancy Reagan came walking by.

Joe remembers seeing a young man in a baseball cap who let out a shout.

Remember! We love you!

The former Nancy Davis stopped, turned her head, and raised her hand to her chest. She placed her hand over her heart. Then, she turned back and walked on…


Nancy … is once again with the man she loved…

One MORE Outrage to Be Outraged About

12 cities that changed their names

The Daily Telegraph presents 12 cities that changed their names…
Posted by Erik at 11:30