80 great quotes about love and romance: from Adam and Eve to chemsex

The Daily Telegraph has compiled a list of 80 great quotes about love and romance, from Adam and Eve to chemsex.
Posted by Erik at 09:31 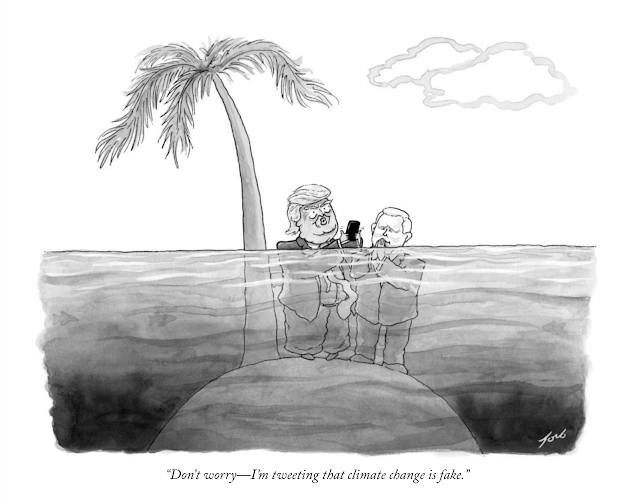 Thanks to The New Yorker's Tom Toro, we now have a Donald Trump-era update of the leftist editorial cartoons that are hilarious except for the inconvenient fact that they seem to be based upon little, if any, substantial reality.

As I wrote back in December,


Like cartoonists around the world, [The Economist's] Kal has drawn GOP elephants mocking activists' fears even as they are forced to climb onto the rooftop of such buildings as the US Congress [and the White House] because of the rising waters.

Think of Los Angeles and New York, of Aberdeen and Brighton, of Capetown and Sydney: Correct me if I'm wrong, but isn't it true that in the past five weeks, the past five months, the past five years, and the past 50 years (even the past 500 years?), the oceans do not seem to have risen by as much as a single inch?

Thousands of [leftists] are howling in outrage as they read this … and as I go on to ask: So who are truly the irrational people here? Isn't science supposed to require the challengers of the status quo to prove their contention?

It used to be that we poked fun at the Chicken Littles and the other boys who cried wolf. In the era of the drama queen, every "The sky is falling!" is taken as holy writ, used to clobber clueless citizens (aka "racists", "deplorables", etc, not least… "deniers"), even as taxes are raised ever higher to increase the size of the administrative state so that politicians and bureaucrats alike can rush to our "rescue".

Hasn't it occurred to you that this snooty (not to mention self-serving) attitude is precisely what, over the past year, skeptical citizens have started to vote against?

More examples of  "provocative" (sic) editorial cartoons in the links below:

• It used to be that we poked fun at the Chicken Littles;
In the era of the drama queen, every "The sky is falling!" is taken as holy writ

• Editorial Cartoons: Are They Humor or Are They Propaganda?

Instapundit Learns that Le Pen's Front National Is Actually Left-Wing, Something a French-Based Blog Has Been Reporting on (and Trying to Bring to Their Attention) for at Least 6 Years 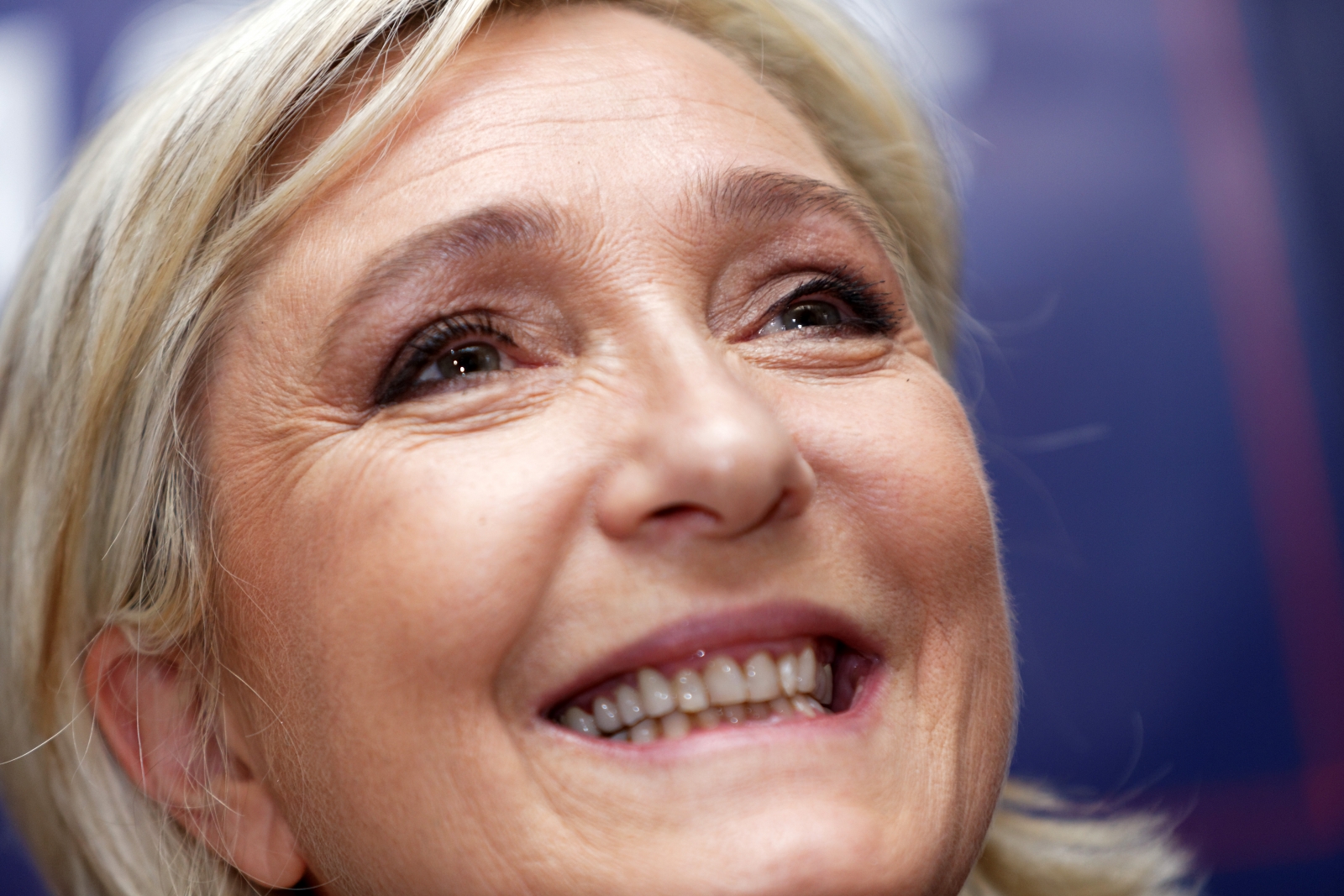 So on Monday, February 6, Instapundit admitted that, contrary to reports that seemed to depict the iconoclasts of the Front National as perhaps a French equivalent to the members of America's tea party movement, Marine Le Pen turns out to be really quite Left-wing. Stephen Green authored the post after seeing a news item penned by the usually reliable Daniel Hannan.

Of course, this is hardly news to No Pasarán. Being a blog whose primary focus, when it debuted 13 years ago, was France and foreign anti-Americanism (the internal danger from the last eight years did change the focal point somewhat), many of whose bloggers through the years have been based in Paris — along with its sister (mainly French-language) blog Le Monde Watch — we have been reporting on the Le Pen clan and its party for years.

Throughout the years, No Pasarán and Le Monde Watch have reported on 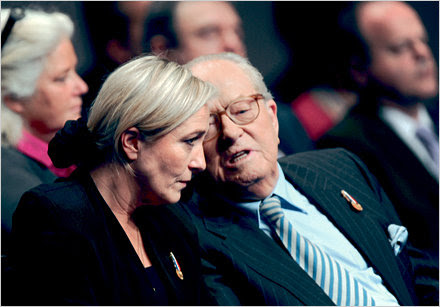 such various news items (most of them from the French newspaper of record, Le Monde) as the Front National's Marine Le Pen criticizing privatization and "extreme" free market policies, on her opining that France needs "a strong state", and on one of her top aides speaking of taking advantage of the fears engendered by globalization and surfing on insecurity and on social suffering.

Meanwhile, one leftist leader got incensed when journalists suggested that the Left and the extreme right's Le Pen family are fighting over the same (anti-capitalist) backyard.

Indeed, in 2015 one libertarian critic was led to ask, Is the Le Pen Party Extreme Rightist or Is It Actually a Reincarnation of the Communist Party?

Moreover, a Harris poll in the Fall of 2012 found that members of the Front National supported Barack Obama over Mitt Romney in that year's election by almost 3 to 1 (70% vs 26%).

Last but not least, there is Marine Le Pen's assertion that France Should Leave NATO, "Turn Its Back" on the American "Hyper-Power", and "Turn Towards Russia".

The post that summarizes all the rest is perhaps a No Pasarán item from the Spring of 2011, detailing the time when a New York Times reporter attempting to write an in-depth portrait on Marine Le Pen reported that, to his utter surprise, the economics of the leader of France's French "far-right party" turn out to be "frankly leftist"!

The money quote was the following:


Marine Le Pen sums it up in one sentence when the New York Times's Russell Shorto "pointed out [to her] that in the U.S. she would sound like a left-wing politician". She shot back that “Obama is way to the right of us”!

Since at least the Spring of 2011, just about every time that the daughter of Jean-Marie Le Pen has been mentioned on the internet (certainly if the coverage was positive), we sent emails to the blogger(s) involved and/or left messages in the appropriate comments section (if applicable) referring to the above-mentioned post with the NYT's in-depth portrait of Marine Le Pen and warning that the members of her Front National may not be the equivalent of America's tea partiers, while Marine herself may be no Geert Wilders and, certainly, no Nigel Farage (as the British iconoclaust pointed out himself by refusing to link his UKIP with her FN).

Of course, 10 years ago, a Le Monde interview with Michael Moore revealed the amazing (albeit hardly surprising) news

that the director of Sicko and Capitalism (A Love Story) admits in so many words — "Dude, I am on Marx's Tomb!" — to being nothing less than… a full-grown Marxist(!). Ten years of attempting to contact American bloggers (again, by mail and/or in the comments section) every time Moore was in the news and/or mentioned in a post with this earth-shattering admission has likewise failed to register.

We don't know if we sometimes go overboard trying to contact you. Possibly we have, once or twice. But, generally speaking, we have tried to send you no more than one email or at most two emails a month.

It's simply, especially when we sometimes discern that our ammunition is occasionally of a particularly potent mixture, that we wish you would reach out and take the ammunition that we hand to you.

Speaking of really good, outstanding material: Last week, we found on a friend's Facebook page of all places — by a denizen from flyover country (in Tennessee, no less) — what we truly and honestly believe to be the very best singular statement (and not only of the past year) on Donald Trump's so-called Muslim ban, on immigration in general, on America's character, on the Statue of Liberty, and on the true and full meaning of the Emma Lazarus poem at its base.

Here, in a couple of sentences, Chip Crain sweeps away all the leftist arguments in the process of plunging to the very heart of the matter: it is hard to believe, he says, that

"What exactly is the success that the Democrats are trumpeting?" Asks France's Far Left Weekly; "What remains of the Obama inheritance?"

From Marianne, one of the most left-leaning weeklies in France, comes this jewel from Stéphane Trano.

After pointing out misconceptions and exaggerrations about the 2016 election, coupled with some cold facts about Hillary Clinton and the Obama administration (the deficit worsened by trillions of dollars, etc), the French journalist living in the Northeastern United States asks:


What exactly is the success that the Democrats are trumpeting? … What remains of the Obama inheritance? … A president is measured by the impact that he leaves behind him, not on his performance on the scene of power. … Apart from that health law which is nowhere near the generous and egalitarian system that Europeans think it is, there is emptiness… [On the international scene], the memories of all are still fresh enough to remember that the eight years of this president were those of great diplomatic and military hypocrisy. But denial, in this area, as in others, is stronger than remembrance.

… America is lucky in that it is a pragmatic society: by bringing the Republicans back to power, against all expectations, it has flanked a magisterial slap in the face of the "progressives" who believed that everything was allowed them. It did so not out of madness or irresponsibility, but because it has confidence in the capacity of its institutions to "absorb" this type of democratic choice, however disturbing it may be for those who consider themselves better educated and more enlightened than others. This is called alternation, a banality that the Democrats now want to call a scandal and a catastrophe.

Related: Stéphane Trano on the November 2016 election:
America's Democratic Blow to the MSM Empire
Posted by Erik at 10:54

Courtesy of the Daily Telegraph, we are pleased to present to you Boris Johnson's finest moments on camera.

Remember that, prior to becoming the UK's foreign secretary, the London mayor was hounded by the IRS to such an extent that, in 2015, he into gave up the U.S. half of his dual citizenship.