On a recent afternoon near the Place de la Bastille, Alberto Riberio, a tourist from Spain, stopped with his family at a quaint cafe and asked a waiter if they could sit down

writes Liz Alderman in a New York Times article in which the money quote comes in the final paragraph.


“Look around!” he recalled the waiter replying abruptly. “You see empty tables, don’t you?”


When the family tried to order food in halting French, the waiter rolled his eyes, Mr. Riberio said. Later, when a wrong dish was served, an argument ensued over whether it would be changed.

“In general, the French can be quite friendly and helpful,” said Mr. Riberio, whose family went on to have a pleasant stay. But the encounter “was a reminder of why they can also have a reputation for being rude,” he said.

In the City of Light, an eternal question is once again spurring debate: Is the stereotype of the brusque Frenchman justified, or do visitors just not understand the French?

The soul-searching is coming from an unlikely place: the Paris tourism board. It is ramping up a charm offensive to burnish the image of France — and Paris in particular — as a kinder place for tourists. Officials have been deluging cafes, hotels, shops and taxi ranks with 20,000 more pamphlets titled “Do You Speak Touriste?”, a manual on how to make travelers feel more welcome, after 35,000 copies handed out in July ran out.

The British, it advises, want to be called by their first names. The Japanese need to feel reassured. The Spanish mainly want people to be nice. (“I would agree with that,” Mr. Riberio said.) As for Americans, the guide notes, they are glued to their personal devices and want to eat as early as 6 p.m. — a frightful thought to a typical Parisien.

“The goal is to fight against a bad reputation, and improve the quality of the welcome in Paris,” said François Navarro, the communication director for the tourism board, the Comité Régional du Tourisme Paris Île-de-France. With 30 million tourists a year, Paris is one of the most visited cities in the world, he said. “But we can do more.”

How much more remains to be seen. Paul Kappe, an owner of the renowned Brasserie de l’Isle Saint-Louis, perched behind the Cathedral of Notre-Dame, gave a Gallic shrug when he saw the brochure.

“It starts with the assumption that the French are disagreeable,” said Mr. Kappe, a contemplative man who kept a watchful eye on the restaurant’s sunny terrace, full of waiters and patrons crammed behind tiny tables. “Well, that does have the ring of truth,” he said. “But it won’t stop a waiter from being unpleasant.”

He added, “Their mentality is, ‘Don’t bother me when I’m working.’ ”

… many of the 600,000 Parisiens employed in the tourism industry place a premium on politesse.

Still, “snobisme” is hardly a relic of the past, and even the French complain about a perceived lack of civility among some of their big-city brethren. A spate of mocking television ads by the newspaper Le Parisien a few years ago, showing Parisiens cutting in line and leaving poodle droppings on the sidewalk, provoked knowing laughs. And this is by no means the first time the government has encouraged a more polished image: in 1995, a “Bonjour” campaign urged people to be pleasant to tourists, echoing several similar efforts since World War II.

Of course, tourists can be uncouth, too. “A lot of Americans shout, or don’t say hello, and then they say the French treated them rudely,” said Karen Fawcett, the president of BonjourParis, a Web site that dispenses travel and cultural insights. “If you don’t have some cultural sensitivity, you are probably not going to be well received.”

Ms. Fawcett said her main tips for visitors were to be polite, keep their voices down and not assume they will be served immediately. “A simple ‘bonjour’ or a ‘s’il vous plaît’ will go a long way,” she said.

… “In the United States,” Mr. Kappe observed, “waiters can be fired at any time and must work for tips, so they have to be nice. In France, you can’t just fire somebody if they’re not doing a good job. If you could, everyone would be friendly.”

Did You Know That in France, People Also Use Guns in Self-Defense? And That the New York Times Would Present the Shooting of a Criminal in as Biased a Way as Possible?

Members of the French élite and its political class may preen about how their country is in favor of gun control as well as poised against the death penalty — thus showing themselves far above the Wild West mentality of those clueless Yanks — but average French citizens apparently think differently when one of theirs comes face-to-face with crime in the streets — something you would have trouble seeing sometimes in Dan Bilefsky's New York Times article.


Early on the morning of Sept. 11, a 67-year-old jeweler in Nice, France, raised his unlicensed semiautomatic pistol and shot a teenager in the back as he and an accomplice sped away on a motor scooter with gems they had stolen at gunpoint … the jeweler, Stephan Turk, was arrested last week and charged with murder.

So a vigilante shoots a "teenager" in the back, we learn. Why don't we hear that the jeweler was "punched and kicked" by both the "youth" and his accomplice, as they forced their way into his jewelry shop? Doesn't the NY feel the need to report that?! Sure it does! But only 11 paragraphs into the story…

The case has set off a national debate in France about how to define self-defense, and about the decision to charge Mr. Turk. Many have rallied behind the jeweler, lauding him as a hero who was protecting his life and property, while others have accused him of being a reckless and unfeeling vigilante.

… a Facebook page created to support Mr. Turk by an anonymous author has attracted about 1.6 million “likes” — a figure so high that some social-network experts have challenged its veracity.

Well — but of course. High figures are always — and only — challenged when they seem to support the right…

At first Mr. Turk was held in police custody, but after a public outcry, he was moved to an undisclosed location under house arrest, wearing an ankle monitor

At this point the International Herald Tribune added a tongue-in-cheek comment (not on the website) — although it made sure to disguise it under unnamed "critics" of the jeweler's:


—a show of empathy that his critics say he did not show his victim.

Yes, it is Anthony Asli, a "onetime horticulture student" with — to be sure — "a string of previous convictions for assault, theft and driving offenses". The victim of "Mr. Turk, a prosperous business owner" in a city where, the New York Times has no choice but to note, "400 jewelry robberies occurred last year."

Now let's pick up on the evil and fearful far right forces, including the awful capitalists, the true enemy of the country:


After the left-wing newspaper Libération lamented on Monday that the support on Facebook for Mr. Turk was “worrying” and “unprecedented,” a reader using the name Rantamplan insisted that the wellspring of admiration for Mr. Turk showed that France was dominated by reactionary right-wingers. “Some people feel that property is worth more than a life,” the reader wrote online in the comments section.

Only after all that do we get to the 11th paragraph:


Eric Bedos, a Nice prosecutor, told reporters that Mr. Turk was held up at gunpoint by two young men as he opened for business on Sept. 11, and that security-camera video showed him being punched and kicked, and then opening his safe.

President François Hollande said in an interview on the French channel TF1 … that he recognized the “exasperation and anger” in the case, but that “it’s up to the justice system to do justice, and no one else.”

Well, that's just the problem, ain't it, Monsieur le Président? When police acting as tax inspectors, i.e., are busy raising money for the French state by ticketing car drivers right and left instead of patrolling (say) the streets of (say) Nice.

The International Herald Tribune decided to change paragraphs around, in order to end the story full of emotion, adding a claim that "a" girlfriend "told Le Monde that she was pregnant at the time of his death" ("a" girlfriend? How many did he have? How many are expecting?) and with a quote from Anthony's dad:

… the father of Mr. Asli said, he did not deserve what happened to him, the newspaper Nice-Matin reported. “He was a little delinquent, a scooter thief,” the newspaper quoted the father as saying. “But he had the face of a child, and no child should have to die like that.”

No quotes from Stephan Turk's wife, mistress(es) — if he has any — parents, children, or 3rd cousins…

Related:
• For a Nation Used to Giving Americans Lessons on Firearms and Police Trust, France Has Been Amassing Quite a Collection of Bullet-Ridden Bodies

• For a Country Always Giving Yanks Lessons on Civility and Gun Control, There Has Been an Amazing Amount of Kalashnikov-Related Killings

• "Unlike the U.S., guns are tightly regulated in Europe, but the French gangs have armed themselves with weapons obtained on the black market"

• In a Country with Gun Controls Like France, the Kalashnikov Has Become the Thug's Rolex of Choice

• PLUS: this lengthy, dispassionate, in-depth discussion on the issue of gun control:
What Is to Blame for the Connecticut Shooting? Does the Blame Lie with the Right to Bear Arms Or Can It Be Found Elsewhere?
Posted by Erik at 13:35 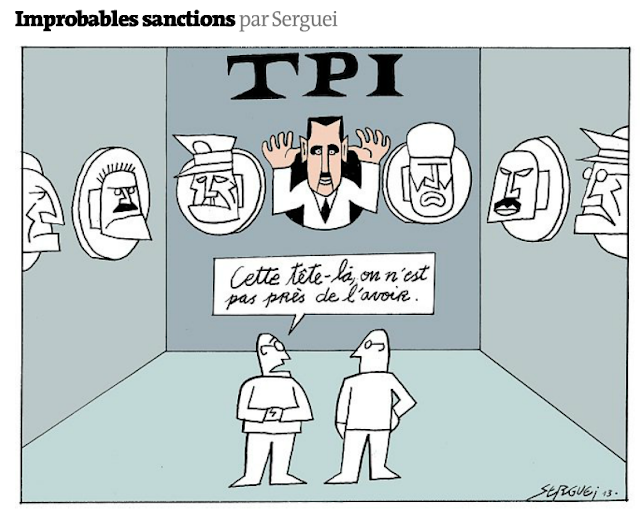 Serguei on the International Criminal Tribunal and on the improbable sanctions that will be placed on Bashir Assad for his use of chemical weapons:
• ICT honcho: There's one head we're not about to bag anytime soon…