Should one feel impressed? And flattered? Or amused?

(And should we put the question to Nigel Farage?)

While accepting the Nobel Peace Prize for the European Union in Oslo’s City Hall a couple of weeks ago, Herman Van Rompuy quoted Abraham Lincoln in his acceptance speech.

As reported by Andrew Higgins in the New York Times, the president of the European Council said: “If I can borrow the words of Abraham Lincoln at the time of another continental test, what is being assessed today is whether that union, or any union so conceived and so dedicated, can long endure.”

Besieged by economic woes and insistent questions about its future, the European Union accepted the Nobel Peace Prize on Monday with calls for further integration and a plea to remember the words of Abraham Lincoln as he addressed a divided nation at Gettysburg.

The prize ceremony, held in Oslo’s City Hall and attended by 20 European leaders as well as Norway’s royal family, brought a rare respite from the gloom that has settled on the European Union since the Greek debt crisis exploded three years ago, unleashing doubt about the long-term viability of the euro and about an edifice of European institutions built up over more than half a century to promote an ever closer union.

Unemployment — now at over 25 percent in Greece and Spain — and sputtering economic growth across the 27-nation bloc are “putting the political bonds of our union to the test,” Herman Van Rompuy, president of the European Council, said in his acceptance speech. “If I can borrow the words of Abraham Lincoln at the time of another continental test, what is being assessed today is whether that union, or any union so conceived and so dedicated, can long endure.”

The European Union, said Mr. Van Rompuy, will “answer with our deeds, confident we will succeed.”

“We are working very hard to overcome the difficulties, to restore growth and jobs,” he continued.

Aside from economic misery, the most serious threat to the bloc so far is growing pressure in Britain for a referendum on whether to pull out of the union. The British prime minister, David Cameron, did not attend the ceremony, but most other European leaders showed up, including Chancellor Angela Merkel of Germany and the French president, François Hollande, who sat next to each other and whose countries, once bitter enemies, have been the main motors driving European integration.

Instead of the customary Nobel lecture delivered by the winner, Mr. Van Rompuy and Mr. Barroso each read parts of what Thorbjorn Jagland, chairman of the Norwegian Nobel Committee, described as “one speech but two chapters.”

Mr. Barroso spoke of the horrors of past wars and tyranny and Europe’s efforts to overcome them through the building of supranational institutions, which began in 1951

with the establishment of the European Coal and Steel Community by France, Germany and four other countries. But he also cited the current conflict in Syria, describing it as a “stain on the world’s conscience” that other nations have “a moral duty” to address. The European Union’s member states are themselves divided about how far to go in supporting opponents of Bashar al-Assad, the Syrian president.

The decision to honor the European Union with the Nobel Peace Prize stirred widespread criticism in Norway, whose citizens have twice voted not to join the union. On the eve of Monday’s award ceremony, peace activists and supporters of left-wing political groups paraded through the streets of Oslo, carrying flaming torches and chanting, “The E.U. is not a worthy winner.”

Many peace activists say they have no problem with European integration but question whether the union has lived up to conditions laid down by Alfred Nobel, the 19th-century Swedish industrialist who bequeathed the peace prize and four other Nobel Prizes.

How do You Say the Word "Kafka" in African? 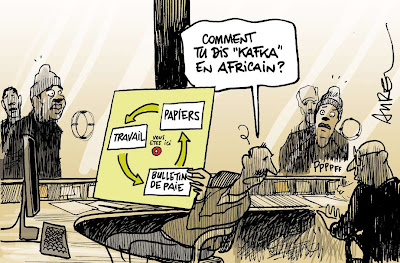 While the Europeans are, as usual, denouncing racism in America, as well as its heartless system (capitalist or otherwise), and giving them lessons in civility and honing their society in a humane manner, while asking that the country's clueless inhabitants look toward their shining shores for the type of society that would be ideal for everybody, it turns out that the system which allows for foreigners to obtain papers in France is hardly more humane, or generous, than elsewhere — and that, even under a socialist government…

Indeed, a better word is Kafkaesque, for while "the holy grail" for getting settled legally through work is the pay slip, as Elise Vincent and François Béguin explain in Le Monde, the cartoon points out that things ain't that simple…

Related: The above does not invalidate the simple fact that
• It So Happens That Every Illegal Alien (in America or elsewhere) Already Does Have Papers

• "Undocumented Worker": The Left's Preferred Expression for "Illegal Alien" Is False and Misleading

After congratulating Barack Obama on Twitter for being named Time's man of the year, and after dissing "strident" gun-rights advocates, a French journalist shows his independence, his objectivity, and his neutrality by calling for the Apologizer-in-Chief to "cash in some of that bonus capital" (not realizing that the "honor" won — hardly earned — by Obama is an entirely artificial one made up by the like-minded mainstream media) and for him to stand up to…

No, of course not;
to stand up to Benjamin Netanyahu…


Yes, one tweet shows that a news editor is both ignorant and biased against Israel. Not surprisingly, the two often go hand in hand. …


UPDATE: Herbert deleted the tweet, perhaps thinking that no one will notice. You would think a person in the media would realize that silently erasing evidence makes things look even worse.

Guess what: it's not too late to order Christmas gifts, for others or for yourself, if you head to Amazon's Kindle store — nor need it be expensive.

Glenn Reynolds mentions that Edward Gibbons' multi-volume Decline and Fall of the Roman Empire is available on Kindle for only $2.99 (the price rises, faintly, to $3.48 when ordering from Europe, which you will agree is fairly acceptable).

While you're at it, you may do as I did, and go berserk by going on a shopping spree and spending like a maniac. (I cannot tell from here, but, as noted, the prices may be even lower when ordering within North America.)

I went on to order:

• Livy's History of Rome ($1.16),
• The Complete Works of Julius Caesar ($1.49), and
• Suetonius's The Twelve Caesars ($1.16).
Besides those, I bought
• the Autobiography of Thomas Jefferson ($0.96)
• and Tocqueville's Democracy in America ($1.16)
• as well as the five volumes of John Marshall's Life of George Washington which are among the Amazon books you can download, on a constant or on a temporary basis, for… free.

Joyeux Noël et
Bonne Nouvelle Année
to one and to all!

PS: Be sure to order Amazon items through an affiliate like Instapundit, which amounts to blog support through your purchases, albeit at no cost to yourself…
Posted by Erik at 22:44

Writes Craig Brown: Archaeologists recently uncovered what they believe to be some of the earliest online comments known to man. 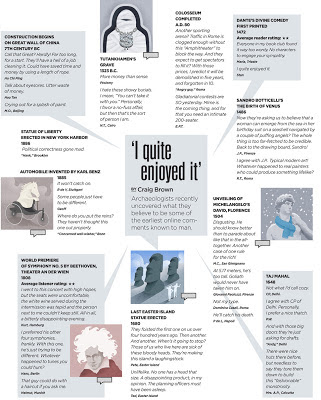 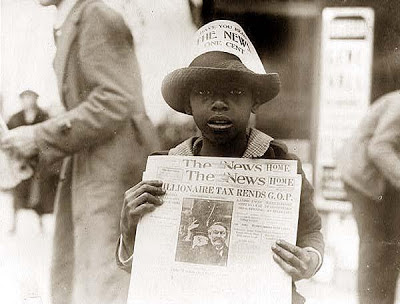 The 1921 headline on this Washington Daily News issue — sold by a newsboy with a sign on his hat asking, "Have you read The News? One cent" — reads "Millionaire tax rends G.O.P".

(Thanks to The Andrea Shea King Show)
Posted by Erik at 14:28

An inspiring and uplifting video helps explain exactly how we averted Mayan catastrophe (thanks to Damian Bennett) and why we all of us are still alive today… (You may have to press Play twice…)
Posted by Erik at 01:51