Great minds think alike: Pope Francis Asks to See Michael Moore in Private and Tells Him that "Capitalism is a sin"

"Capitalism is a sin" Pope Francis said to the director of Capitalism during a visit to the Vatican. In the Valeurs Actuelles weekly, Amaury Brelet reported that


The far left American director and the pontiff, who met a few weeks ago at the Vatican, seem to share, without surprise, the same radical opinions.

Michael Moore spoke with Pope Francis a few weeks ago at the Vatican. The far-right American director even detailed their interview while a guest on the show "Late Night with Seth Meyers". "I went to the general audience and asked to speak to me privately…"

Flashback: In an interview with a foreign-language newspaper never disclosed by America's MSM, Michael Moore, the director of Sicko and Capitalism (A Love Story), admits in so many words — "Dude, I am on Marx's Tomb!" — to being nothing less than a Marxist


James Grein said what the bishops [of the United States Conference of Catholic Bishops (USCCB)] wouldn’t:


“It is not Francis’s church; it is Jesus Christ’s church.” 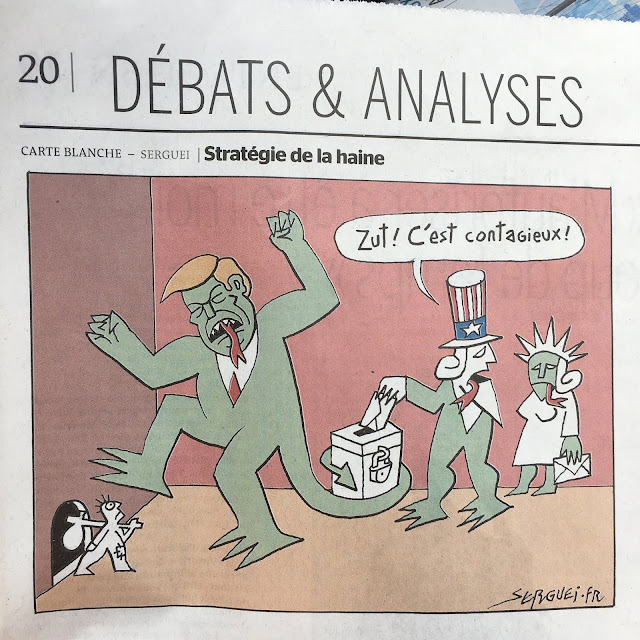 • Uncle Sam: Darn it! It's contagious! 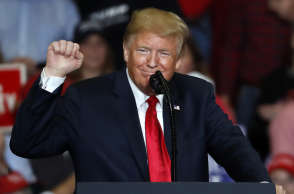 Last weekend, Le Monde treated us to a typical cartoon from Serguei: as Donald Trump rants and raves about a single solitary harmless illegal immigrant (not 7,000, or 12,000, or 11 million, or 22 million), that he may be trying to squish under his Godzilla-lie foot, in a carte blanche entry titled The Strategy of Hatred, the president, Uncle Sam, and Lady Liberty all appear as reptiles with a snake's forked tongue…

Second flashback (way back, to… 1860!) —
Abraham Lincoln attempting to speak to members of the Democrat party:


… when you speak of us Republicans, you do so only to denounce us as reptiles, or, at the best, as no better than outlaws. You will grant a hearing to pirates or murderers, but nothing like it to [Republicans]. In all your contentions with one another, each of you deems an unconditional condemnation of [Republicanism] as the first thing to be attended to.


It is, after all, a given among liberals who never interact with people who don't think like them that everyone who doesn't is a racist Nazi science-denier.

Or some other kind of monster. Or a reptile.
Posted by Erik at 17:10 No comments: