Why All the Tears?

DON'T TELL THE FEMINISTS!  After a Danish student made a huge public stink about "sexism in night life" — due to the fact that she got "insanely furious" that a couple of men had patted her behind in a Copenhagen bar (the bartender refused to obey Renna Rose Agger's remark to him, "that's illegal, throw them out") — Dr. Karin Helweg-Larsen told BT's Berit Hartung that there is no harm in that type of incident; for either men or women.

The expert on violence in society added that, yes, there might be cause for concern if it happened on a dark forest lane, but that she would never feel attacked if anyone pinched her buttocks.

If a woman is incapable of signaling where her boundaries lie, she said, that woman should refrain from going out on the town.

… the two bruising encounters [with President Xi Jinping of China and President Vladimir V. Putin of Russia] in such a short span underscore a hard reality for [President Obama] delivered as he heads deeper into a second term that may come to be dominated by foreign policy.

Thus wrote Mark Landler and Peter Baker about the Apologizer-in-Chief in the New York Times a couple of years ago, before spelling out the harsh reality in question:


his main counterparts on the world stage are not his friends, and they make little attempt to cloak their disagreements in diplomatic niceties.


Even his friends are not always so friendly. On Wednesday, for example, the president is to meet in Berlin with Chancellor Angela Merkel of Germany, who has invited him to deliver a speech at the Brandenburg Gate. But Ms. Merkel is also expected to press Mr. Obama about the National Security Agency’s surveillance programs, which offend privacy-minded Germans.

For all of his effort to cultivate personal ties with foreign counterparts over the last four and a half years — the informal “shirt-sleeves summit” with Mr. Xi was supposed to nurture a friendly rapport that White House aides acknowledge did not materialize — Mr. Obama has complicated relationships with some, and has bet on others who came to disappoint him.

… Even with friends, however, there is tension. President François Hollande of France was initially thrilled with Mr. Obama because he saw him as an ally against Ms. Merkel on economic issues.

But by the time they met at the Group of 8 summit meeting in Northern Ireland on Tuesday, the relationship had soured, according to French analysts, because France is frustrated that the United States did not do more to help with the war in Mali and resisted a more robust response to Syria.

Mr. Obama differs from his most recent predecessors, who made personal relationships with leaders the cornerstone of their foreign policies. The first George Bush moved gracefully in foreign capitals, while Presidents Bill Clinton and George W. Bush related to fellow leaders as politicians, trying to understand their pressures and constituencies.

Have U.S. Relations with Russia Reverted to The Same Type as Those During the Cold War That Obama Once Mocked Romney For?

… the concern is part of a growing wariness among senior American and allied military and intelligence officials over the accelerated activity by Russian armed forces around the globe … the internal debate in Washington illustrates how the United States is increasingly viewing every Russian move through a lens of deep distrust, reminiscent of relations during the Cold War

Am I the only one who thinks that the world seems to be a far more dangerous place in 2015 than a decade ago (Russian Ships Near Data Cables Are Too Close for U.S. Comfort, October 26)?

I remember when Barack Obama mocked Mitt Romney during the 2012 election, telling him "the Cold War's been over for 20 years."  I also remember him furtively asking Vladimir Putin's protégé for "space" that year, whispering that after said election he would "have more flexibility" with regards to making the U.S. missile defense more palatable to the Kremlin.

Finally, I remember the enthusiasm in 2008 for getting that dumb, war-mongering cowboy Bush out of the White House, and replaced by a visionary who would make the United States loved and respected again, bringing an unprecedented measure of peace to the world in the process.

Besides Moscow annexing Crimea (with Russian fighters routinely violating EU airspace), we have

Beijing saber-rattling in the China Sea and ISIS capturing one Middle East stronghold after another.  (Yes, I also remember Joe Biden calling the 2011 return of all U.S. combat troops from Baghdad "one of the great achievements of this administration", with Obama declaring "I ended the war in Iraq, as I promised.")

One might be excused for speculating that far from appreciating the 2009 Nobel Peace Prize laureate's overtures, his numerous apologies, and what Democrats call "smart diplomacy," all sorts of actors have become emboldened and, if anything, are itching for a fight with Uncle Sam.

During the previous administration, we kept hearing—far from inappropriately—how the latest batch of troubles of the time was "on Bush's watch."  Will no media outlet point out the obvious, that the leftists' feel-good, smiley-face fairy tales about the world ("be nice and talk to everybody, we can all live together") might be at least partially responsible for the the current perilous state of events?
Posted by Erik at 14:27

When Hillary attended the funeral of a former Navy SEAL who gave his life at Benghazi, she told the victim’s father she would seek retribution—not against the barbarians who killed his son, but against the video maker


The emails concern the motive for the attack and its perpetrators. It was never about “The Innocence of Muslims,” a Youtube video that portrayed the historical Mohammad as a truly villainous character. Nearly everyone now admits that the video did not spark the great Benghazi conflagration that left four Americans dead and a consulate in ruins—and by “everyone,” I mean members of the Obama Administration. It was like pulling teeth to get them to concede the point but they apparently have. Their current position is that they made an honest mistake in the Clausewitzian “fog of war.” As difficult as it was to defend the “honest mistake” narrative before Clinton’s emails were uncovered, it is now impossible—or at least it’s impossible for people who care about facts.

Three emails discovered on Mrs. Clinton’s illegal private email server—the one she wiped to stymie investigators—reveal that the secretary never believed the Youtube yarn for a moment. The night of the attack she confided in her daughter Chelsea via email that the compound had been besieged by an “al-Qaeda like group.” She said something similar to the president of Libya, and to Egyptian Prime Minister Hesham Qandil she wrote: “We know the attack in Libya had nothing to with the film. It was a planned attack not a protest.” These words were written approximately twenty-four hours after the attack.

Being the skilled liar that she is, Clinton actually tried to deny that she had ever claimed otherwise. Clearly it was a terrorist attack, not a spontaneous protest gone awry, and she had said so all along!

Okay, not really. On the night of the attack, she addressed the nation, saying:


“Some have sought to justify this vicious behavior as a response to inflammatory material posted on the internet. The United States deplores any intentional effort to denigrate the religious beliefs of others. Our commitment to religious tolerance goes back to the very beginning of our nation. But let me be clear: There is never any justification for violent acts of this kind.”

So there are two lies in that brief statement—that our government values religious tolerance (LOL!) and that the attack was spurred by a video. I’m sure her defenders, weasels that they are, will argue that Clinton never definitively blamed the video but only claimed that “some” sought to justify the attack on those grounds. Who those “some” are is unclear, especially when one considers that the rumor was spawned at the highest levels of the US government. In any case, it’s weak sauce. She was clearly blaming “The Innocence of Muslims,” just as the rest of the administration did. They had their talking points coordinated and they spoke with one voice—blame the video!

… It would be prudent at this point for Mrs. Clinton and her former boss to apologize to the American public for misleading them. It’ll never happen, I know. But there’s another person, a non-American, who also deserves an apology. His name is Nakoula Bassely Nakoula and he produced the video under the pseudonym “Sam Bacile.” Mr. Nakoula was the administration’s sacrificial lamb led to the slaughter so that the administration could appease the mob, escape blame, and win reelection. Besides the four dead Americans and their families, of course, no one has suffered more than he.

When Mrs. Clinton attended the funeral of Tyrone Woods, a security contractor and former Navy SEAL who gave his life trying to hold back the angry hordes, she approached Charles Woods, the victim’s father, and told him that she would seek retribution—not against the barbarians who killed his son, of course, but against Nakoula Bassely Nakoula. According to Mr. Woods, Clinton said “We’re going to make sure that the person who made that film is arrested and prosecuted.” Yikes!

… The Benghazi attack’s death toll ought to include the names of four dead Americans, of course, but also the first amendment, which died a little that day in September 2012.

About Ben Carson: "He really is as nice a man as he seems" 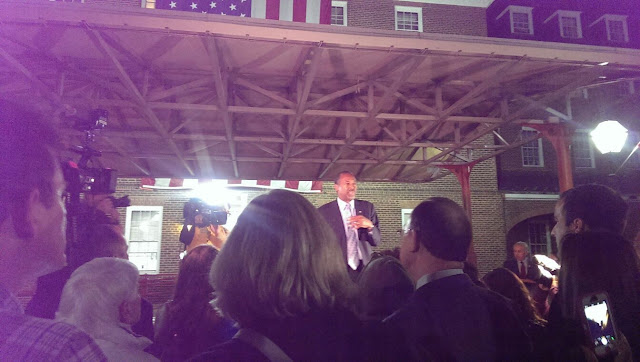 We got a message from N-Joe, the No Pasarán webmaster who wrote for years for the weblog.

He was at an event of Ben Carson's and sent the above photo along with the following text:


He really is as nice a man as he seems

If, like me, you want Joe N to come back and return to regular blogging, tell him so in the comments b'low.
Posted by Erik at 23:08