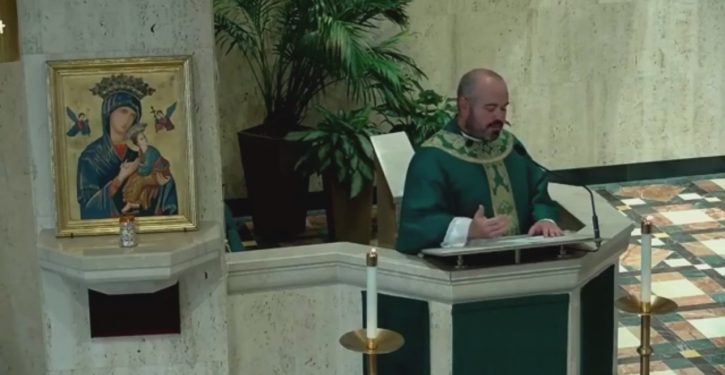 The Dearborn-based Catholic priest … seems to have caused chaos and dismay when he spoke out against the Black Lives Matter (BLM) movement as “evil.”

“Cars have been torched,” said Graney. “Property has been destroyed. Businesses looted and burned, and police officers and other people have been intimidated, assaulted, and even murdered. All in the name of justice.”

Naturally, some people said his message was beyond the pale. But I say, preach it, brother!

As if to confirm everything Graney had said, later that same evening an assailant ambushed two Los Angeles County sheriffs’ deputies as they sat in a cruiser.

Miraculously, both survived. Though we don’t know for certain that the perpetrator was a BLM activist, it isn’t a huge leap to make in this current climate of anti-police enmity to think that the shooting was meant to avenge the death of George Floyd.

We do know however that BLM activists made tracks to the local hospital after the shooting in order to block the entrances and exits. If BLM didn’t perpetrate the murderous act — and I suspect it did — it at least applauded it. BLM activists were apparently shouting, “We hope they f*cking die!” … They later swarmed the emergency room.

… Nike gave a shoe deal to third-rate ex-quarterback Colin Kaepernick for having the courage to take a knee during the national anthem. His actions caused “pain, anger, and frustration” among some NFL fans who made their gripes known to the league. But the league didn’t care about those fans.

… But Kaepernick’s newfound fans, most of whom love his politics more than his football, assert without evidence that he paid dearly for speaking out about racism and police brutality, two of the fakest pandemics in America today. There is no epidemic of police violence against unarmed black men.

The disparate treatment between activists like Kaepernick and activists like Father Paul Graney puts the lie to some of the Left’s most common catchphrases. Here are just a few.

If I’ve learned anything over the past few months it’s that we’re all supposed to be having “difficult conversations” about race, privilege, systemic racism, and police brutality. Some of us are forced by our employers to participate in these difficult conversations under the implied threat of losing our jobs.

Rest assured that conversations about race, privilege, systemic racism and police brutality are not “difficult” for everyone. They’re not difficult, for example, for the black lady who runs the “diversity and inclusion” office at your workplace. It’s all she ever talks about. She has a four-year degree in those subjects and she reads books about them during her lunch break — just for fun!

These kinds of conversations are difficult for people who cannot say anything lest they be accused of “whitesplaining,” using “dog whistles” and “coded language,” or committing “microaggressions.” They’re difficult for people who haven’t kept up with the latest terminology — “Latinx,” “people of color,” “DREAMers” — and who know that at any moment they might face an extreme social penalty for using a term that was completely acceptable until just a few years ago.  And they’re most difficult of all for people who merely dissent from the domineering white guilt narrative that is constantly being shoved down our throats.

In other words, these conversations are difficult for people who make the mistake of believing that they are actual conversations. They aren’t. They’re Maoist struggle sessions in which one side lectures and the other side engages in copious amounts of self-flagellation. They’re degrading and that’s the point.

The first thing you have to do during these Maoist struggle sessions is to agree that you are hopelessly racist because not owning your racism is racist in and of itself. Also, you may not sit quietly in the corner and watch the clock tick by. When the wokeness police come knocking, you do not have the right to remain silent because “silence is violence.” Speech is also violence if the words express any kind of disagreement. The only thing that is not violence is unconditional surrender to their agenda coupled with a humiliating petition for racial forgiveness — which may not be granted.

Father Graney’s homily was a peaceful protest in the greatest American tradition, yet he may still pay a price for it because not all peaceful protests are created equal. Peacefully protesting police violence against black people is lauded in our society; peacefully protesting against the much more common occurrence of black violence against police officers — or against one another — is not.

Most people, I believe, would agree that peaceful protest shouldn’t cost a person his job. Most people, that is, except employers. Not one employer I have ever had has allowed me to “peacefully protest” while on the clock — and I’ve had a lot of employers. Nor have I ever had a job at which I had anything resembling unfettered free speech. I could have been fired from any of my many jobs for remarks made in private conversation, or even off the clock. I certainly would have been fired if my aggressive political opinions had alienated even a handful of customers — which is exactly what Kaepernick did.

The “peaceful protest” card immunizes people with the right opinions from losing their jobs, being disciplined, or even being criticized. However, those of us who engage in Wrongthink may not play this card. And that includes Paul Graney.

Just days into the 2016 season, CNN informed us that Colin Kaepernick was “bravely speaking truth to power.” Leftists love that phrase.

But it’s a lie. Leftists never speak truth to power because they never speak truth. The best they can manage is to speak untruths to power and more often they don’t even do that. I don’t know what “power” Kaepernick was speaking to, but I do know that he was far afield of the truth. Cops are not hunting blacks for sport and in fact they kill more whites every year than blacks.

Father Graney on the other hand did speak truth to power. We’re living through an epidemic of violence and destruction all predicated on a myth and propelled by an evil, racist, anti-American, anti-family group of Marxist agitators called BLM. His homily struck a blow against the most powerful people of all: the architects of the official narrative. I’m talking here about Big Government, Big Business, Big Education, and most of all, Big Media. If that’s not speaking truth to power, nothing is.

I sure hope Father Graney hangs tough. We as a society have a duty to stick up for courageous truth-tellers. Not only should he not receive a lick of punishment, he really ought to have his stature elevated in the Church. Is it too soon to start talking about Graney for pope?