Kathy Shaidle mentions some things that would never appear in the mainstream media (or only in the last section, in the next-to-last paragraph of page 23), from a 1959 story reminiscent of Borat or Ali G …

Crowds of Africans who wanted to buy wives for $7.14 each [in 1959 were shortly after] told by the government that those stories about slave auctions were only rumor.

Local official W.P.M. Maigacho had to issue an official denial of the rumors after men from outlying tribes twice gathered in the town of Tononka, expecting to take part in a slave auction.

According to the rumors, native girls from a local mission were being sold for the equivalent of $7.14. The purchaser could take the girl to Mombasa and marry her, the rumors said.

A political bombshell? Merkel's election campaign paradigm change might be "so enormous that no one in Berlin will talk about it publicly”

FOR Angela Merkel to get re-elected on Sept. 22,

the most conservative commentator working for the New York Times, in the International Herald Tribune,


a risk she must avoid is arousing German voters’ fears of painful economic reforms by the governing coalition. On that score, so far so good, according to Renate Köcher, who runs the Allensbach Institute, one of Germany’s elite polling organizations. In her view, stoking those fears is a big part of a potentially winning formula for the opposition — but she adds that “an overwhelming majority are not concerned about having to face such reforms in the foreseeable future.”

All the same, she writes that only 19 percent of the voters think continuation of the Merkel-led, right-of-center governing coalition is a good idea. In spite of the chancellor’s general popularity, Köcher believes the election to be “everything other than locked up” and the campaign so far without a decisive theme.

How about this one: Germany embarking on an economic “paradigm change,” which means standing its old export-export-export/save-save-save model on its head. The idea would be to encourage growth through higher German salaries and consumption, more imports and, in a sense, less competitiveness.

This theme entered the election campaign picture last weekend with what seemed like a careful leak to a newspaper. “It’s so enormous that no one in Berlin will talk about it publicly,” the weekly Die Zeit reported. As its sources, the newspaper cited both “an official” said to be helping to formulate the government line, and “other members of the government” who insist the policy turnabout plan is for real.

Theoretically at least, this could be a political bombshell because the shift in approach equals a move away from the creed of austerity that Germany has preached to the rest of Europe. Die Zeit — its seriousness embodied by Helmut Schmidt, who serves as its co-publisher — wrote, “Silently and softly, Angela Merkel is planning the next big change in the economy.”

But maybe a little skepticism should enter here. …

(Time for a reminder and to point out that this blog's primary raison d'être (Behind the Façades in France) is to explore "What expats and the mainstream media (French and American alike) fail to notice (or fail to tell you) about French attitudes, principles, values, and official positions".) But back to Laurent Obertone's book:

Flying in the face of the traditional image of a country seen as the land of good living, 'France, A Clockwork Orange' claims that mainstream politicians and the media have long masked a far more disturbing reality: it is rapidly descending into mindless violence and incivility.

"Nobody should ignore the reality," the book claims, namely that "every 24 hours 13,000 thefts, 2,000 attacks and 200 rapes" take place in France – figures far higher than official national statistics.

Claiming to lift the lid on a taboo – "the 'ensavagement' of a nation" - it has been dismissed by some commentators and criminologists as biased, unscientific and downright racist, peddling far-Right theories linking crime and immigration.

… In the book, [Laurent Obertone] clinically enumerates one gratuitous crime after another gleaned from the press, police and judiciary, before coming to the conclusion that "ultra-violent crime" is exploding in France.


"The real level of insecurity, probably the worst in the history of the French Republic, is around 12 million crimes per year," he claims. To reach this figure, the author contends that true crime rates are "three times higher" than official figures as these only take into account registered or solved crimes.

Speaking on France 2, Mr Obertone said: "I am fighting for a truth I have felt and that does not get the media exposure it deserves." The book, which calls for a hard line on prison sentences, has struck a nerve as France's parliament this week begins a debate on reforms aimed at making prison a "last resort" by using fines, probation, treatment and training for less serious crimes.

… Sales of Mr Obertone's incendiary jumped after Marine Le Pen, leader of the National Front, urged everyone to "read it and get others to read it".

Mr Obertone denies being a far-Right sympathiser saying he has "no political commitment".

Evangelical Christianity Called "Radical Religion" by the HuffPost, Presented as Clear and Present Danger in an Army Story Titled "Bombing for Jesus"

No, nothing about Islam (extreme or otherwise), whose members apparently are owned nothing but apologies… Why do you ask?

In other news, the HuffPost describes — matter-of-factly — America's armed forces, along with the U.S. Army's military contractors, as "America's military industrial complex". A story ominously entitled Remember Blackwater? starts out with an inane (or fear-provoking) comment, also presented as nothing but an indisputable fact, about how closely America allegedly avoided the military draft and thereby how close we allegedly came to sending America's sons and daughters to the perils of Iraq and Afghanistan.

Uncle Sam Portrayed as an Evil, Bloodthirsty, Gun-Crazed Monster With No Love for His Fellow Man 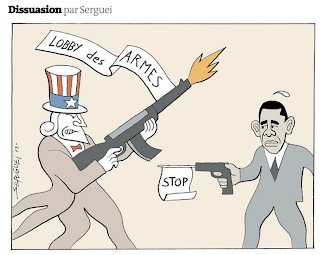 In Le Monde's Serguei cartoon on the gun lobby, Barack Obama is again shown as a Messiah-like outsider — a messiah bringing (or trying to bring) the blessings of European society, with its tolerance™ and its compassion©, to their clueless American cousins — so, to no one's surprise, we get the symbol incarnate of that clueless Yankee clod, Uncle Sam, appearing as a deranged, violent, gun-crazed, bloodthirsty monster, without an once of love for his fellow human being.
Posted by Erik at 11:12

I wish to extend my deepest gratitude to the Huffington Post for the article about Steven Crowder's alleged inane CPAC comment about rape (via Instapundit) because it illustrates perfectly the left's devious ways of reporting about the news in general and about conservatives in particular.

Short story:
The person who made an inane comment about rape was NOT Steven Crowder;
it was ASHLEY JUDD!

In case you're interested, “Ashley Judd … tweeted that purchasing apple products is akin to rape" (Oh, and by the way, "the intelligent, young, successful and beautiful Ms. Judd" tweeted that comment from… "her iPhone”!)

EXCEPT!
1) the Huffington Post got it (deliberately?) wrong;
Crowder got the identity of the "idiot" (for want of a better word) correctly
while Ariana Huffington's article got it wrong (indeed, what it did
in a sense amounted to — gleefully — shooting the messenger)
And this brings us to the next point:
2)
— BECAUSE Ashley Judd is a liberal making an inane rape comment, and — BECAUSE she was comparing a hideous crime to the ultra-evil nightmarish capitalistic system, it turned out that, indeed, there was no outrage, either at the time or later (now), from the Huffington Post or from other liberals. (Indeed, that's the reason why I felt it necessary to add: "In case you're interested"…)

And when a conservative makes a comment not about rape per se but about an inane comment about rape (Ashley Judd's), the left went,


Gotcha! — now we can do our usual bit, ignore the backstory completely and pin this on those awful, terrible, heartless conservatives!

Update: Good Deed Department — Thank you for going to the Huffington Post's original reporting (sic) of this event and favoriting my similar-sounding comment (not for my sake, but for Steve's and, yes, for the entire conservative movement's)…
Posted by Erik at 10:30

To commemorate the 60th anniversary of Stalin's death, Le Monde's

Nicholas Werth has assembled a portfolio of faces of prisoners condemned to death plus a portfolio of the Great Terror's "invisible vestiges", as well as an editorial and a map of the gulag archipelago.