If Trump were to be elected president (and there’s only a sliver of a chance that he will be), nothing will change in this country in regard to immigration, illegal or otherwise

I’m beginning to think that Donald Trump was right when he said that he could “stand in the middle of 5th Avenue and shoot somebody” and not lose support among certain segments of the population.

writes Benny Huang in a Freedom Daily post entitled The Only Reason to Vote for Trump Just Vanished (Trump has "softened" on his signature issue because he has no principles).


The man who crafted a campaign around two primary issues—illegal immigration and trade—just caved on the first of these. After months of being the toughest talker on illegal immigration, he’s basically come around to the establishment’s way of thinking—namely, that there are just too many lawbreakers out there to do anything about it now. Trump maintains that if he’s elected president he will still build a wall on the southern border, though I suspect that he left that for a future flip-flop.

And so the great climb-down begins.

During an appearance on FOX News last week, Trump said that “the first thing we’re going to do if and when I win is we’re going to get rid of all of the bad ones.” What Trump is basically saying is that there should be amnesty for illegals. Sure, if they commit some other crime after they commit the crime of entering our country illegally, Trump will go after them; but all of those “law-abiding” illegal aliens (an oxymoron if ever there was one) will be left alone. That’s amnesty no matter what you call it.

If Trump were to be elected president, and there’s only a sliver of a chance that he will be, nothing will change in this country in regard to immigration, illegal or otherwise. The lawless open border will remain lawless and open, the Border Patrol we pay to pretend they’re enforcing the law will continue to play make-believe, and the rule of law will continue to be a big joke. Don’t believe me? Donald Trump admitted in the same FOX News interview that his policy would be a continuation of his two predecessors.

Apparently Bush and Obama had the situation under control the whole time. Who knew? His remark leaves me wondering why he chose to run for president on this issue when in fact he was perfectly content with the status quo.

Some people are shocked by Trump’s mealy-mouthed backtracking but I am not. Despite his strutting around in a hard hat at a West Virginia coal miner’s rally, Trump is not a working class hero because he is not working class. Donald Trump is, was, and always will be a certified member of the employer class, which means that he really likes cheap labor.

Of all the Republican candidates for president this past year Trump was perhaps the second squishiest on illegal immigration after Jeb Bush. It wasn’t that Trump didn’t talk tough on the issue, it’s that he didn’t mean a word of it. Donald Trump was, to my knowledge, the only candidate among the seventeen who had ever actually employed illegal aliens. In 1980, illegal Polish immigrants cleared the parcel of land where Trump Tower stands today. Trump has claimed that he can’t be held responsible for the actions of every contractor and subcontractor on the project but there’s evidence in FBI files that he knew exactly what was going on and approved it. In 2013, after several amnesty activists met with Trump, they claimed that he had bragged to them about employing illegal aliens at a golf course he owns in Florida. They left the meeting feeling as if he were on their side—and he was.

Those of you who voted for him have every right to feel betrayed. Trump latched onto illegal immigration because he knew that it was burdening your communities but he doesn’t care about you and he never did. He cares about power. In that regard he’s not all that different from Hillary Clinton or her husband, both of whom were once friends of the Donald.

Now that Donald Trump has burned his supporters on the issue that supposedly distinguished him from the pack, what reason remains to vote for him? I ask this question as a conservative to other conservatives: If Trump is not going to be the leader who finally restores some sanity to the lawlessness that has swept our country, what exactly is gained by electing him?

And really, is he so different from Hillary Clinton? I don’t think so. As Joe Scarborough once said, Trump is basically a “centrist Democrat.” … He is, to put it bluntly, a lowlife dirtbag with no redeeming qualities.

But none of this was supposed to matter, you see, because he was tough on illegal immigration. As I’ve been told over and over again since this grueling campaign began, we’ve got to focus like a laser beam on reasserting authority over our own country and its borders. This argument was advanced eloquently by the writer Ann Coulter, a pundit I liked very much until she went off the deep end for Donald. As she explained in her book “Adios, America”:


“What happens with immigration will determine whether America continues to exist or becomes a Third World republic that will never elect another Republican—in other words, ‘California.’ It’s more important than gun rights, right to life, taxes, or Iran’s nuclear program—or whatever other issue you care to cite, because immigration will decide all issues, once and for all, in favor of the Democrats.”

It’s a curious argument—that we can only win the big issues by surrendering on them for the moment to focus on a single one. Will we ever be able to undo all the damage we’ve done by punting all the other issues to the Democrats? I kind of doubt it; they’re skilled at making their policy changes irreversible.

Now that Donald Trump has officially adopted the Rubio/Bush/Bush/Schumer position on illegal immigration, the rest of us are kind of left in the lurch here. The argument before was that even though he sucks on nearly every issue, at least he’s going to start deporting those illegals! Now the argument seems to be that he sucks on every issue including illegal immigration…but at least he’s not Hillary!

This man is the worst mistake the GOP ever made. The positions he takes are written in Jell-O because he has absolutely no principles.

Related: The ultimate political chameleon, Trump was a wealthy, secular, country club Republican who bragged of hiring illegal aliens
• Donald Trump either doesn’t know or doesn’t care about the defined boundaries of federal power
Posted by Erik at 17:38

Misleading Statistics: Would the EU Really Dominate the Olympics in Medals Won If It Were "United"? 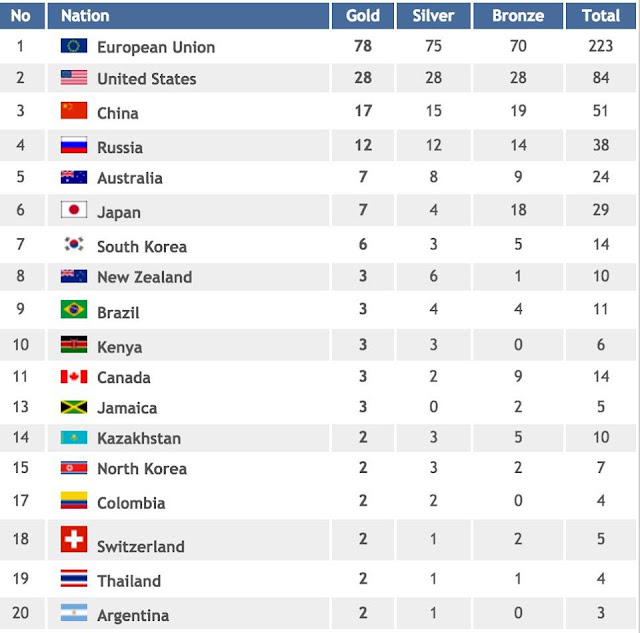 There is a meme online, as there has been four (and more) years before (I first heard it years ago by the presenter of a French TV news program), claiming that — imagine! — if the European Union were truly united, they would dominate the amount of medals won at the Olympic Games.


This is for my US friends who think they are ahead in the 2016 Olympics. Only because Europe has no sense of unity!

It is nonsense, of course, utter nonsense.

It is also evidence of the misleading nature of statistics, not to mention common folks' tendency to trust simple catchphrases.

Sure, if you add up the medals from France, and Germany, and Denmark, and the UK (for how much longer?), you arrive at a greater total number of medals.

If the EU truly had a "sense of unity", you wouldn't have up to 28 different entities (nations) competing in each sports branch at the Olympics, you would only have one. The EU "representative" might turn out to be a Swede in one area (curling?), a Spaniard in another (bull-fighting?), a German or a Pole in a third (sausage-making?). Maybe, in one given year, a plurality, or a majority, of contenders might all come from one single country. (Presumably there would have been an EU competition, a mini-Olympics if you will, beforehand — although it is a safe bet that the pétanque contender would hail from France.)

Otherwise, you have to admit the "solution" isn't a simple as the would-be statisticians would make you believe.

Indeed, why stop there?

If a certain multitude of medals ought to be counted as one, why shouldn't the logical conclusion go in the other direction, and have unitary competitors "divided" into their respective constituencies?

Why shouldn't Canada ought to have one third to half as many candidates (or teams) as the EU for each sports branch, not 1 as now but 9 extra for the Canucks' 10 provinces (Ontario, Québec, British Columbia, etc…)?

Shouldn't the United States, meanwhile, have nearly double (!) the number of candidates (or teams) as the EU, an extra 49 for a total of 50 states, with contenders from Texas, Massachusetts, North Dakota, etc, etc, etc?

Similarly, in the Soviet era, the USSR had one candidate (or one team) per sports branch at the Olympics, not 15 for the number of its constituent (Soviet Socialist) republics.

On the other hand, the USSR itself had representation in the far more important area of the United Nations (as did/as do Canada and the United States — albeit not the EU), but so did Soviet member republics Ukraine and Belorussia — which was nothing but a sham, of course. (Again, Florida, South Carolina, Rhode Island, Manitoba, Saskatchewan, and Prince Edward Island had/have, needless to say, no membership at the UN.)

How sure can you be so sure that the EU would dominate the Olympics if its' 28 contenders had to compete against the Canadians' 10 as well as against the Americans' 50?

Related: Tyrannies demand immense efforts of their populations to bring forth trifles, and there can be no trifle more trifling than an Olympic record, or even a victory without a record
Posted by Erik at 09:10