Hiroshima: During WWII, Japan Killed 7 Times More People (Most of Them Civilians) than They Lost

Among the "mind-boggling" nuggets that Victor Davis Hanson delivers in a speech at Hillsdale College on Why World War II Matters (6:16), the history teacher explains that of the victims,

80% of the 65 million [dead] were civilians! It's the only war in which the losers [the Axis or Fascist powers] killed 75% of the people. The losers did! … Japan killed seven times more people than they lost. And they lost [the war]!

I.e., the Japanese still managed to lose the war. 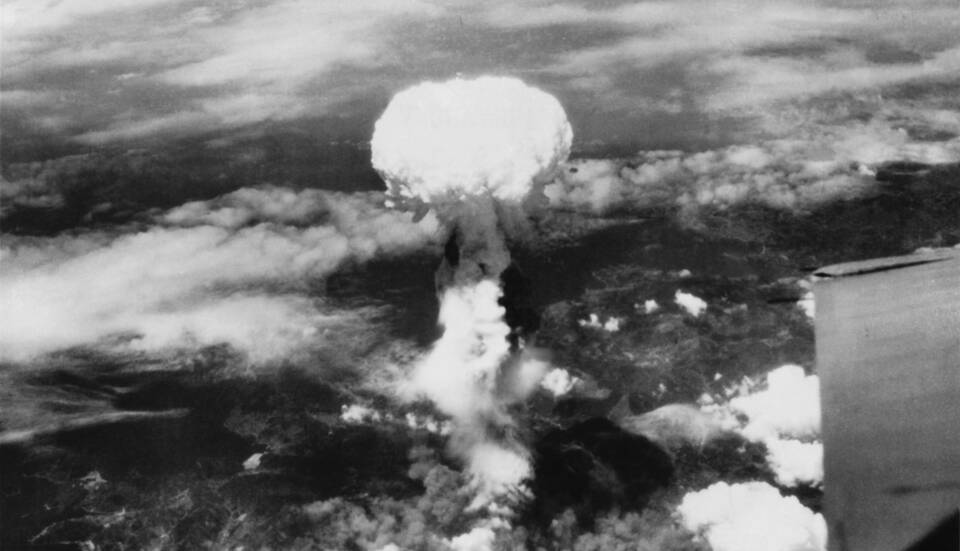 From the archives: 15 Facts and Arguments in the Hiroshima Debate Which Are Ignored by the MSM and Historians Alike:
A critical examination of some common charges against the Americans regarding the dropping of atomic bombs on Hiroshima and Nagasaki (photos & images from Valérie Kubiak and Jean-Jacques Allevi's Géo article).

Americans may have felt hatred for the Japanese during WWII, but it was not for what race the Japanese belonged to and it was certainly not a hatred that allowed them to murder on sight (what did the so-called American racists hate, and fight, the Nazis for, then ; for being blond, blue-eyed Aryans?!). It was for what they had done, the treachery in Hawaii (remember Pearl Harbor?), the murders of POWs on the Bataan death march, and the numerous other atrocities committed throughout the Pacific, of which the rape of Nanking is only the most repellent. Still, that anger alone was not what led U.S. authorities to drop atom bombs on Hiroshima and Nagasaki. It was the Japanese refusal to surrender, backed by the prospect that the blood-letting would continue and that the fighting would, in fact, intensify.


The Americans' Uncalled-for
Intensification of the War

Many more Japanese died in the hell-hole of Okinawa than in the nuclear blast of Hiroshima. More were killed in the battle of Leyte Gulf than in the explosion at Nagasaki. Based on America's 35% casualties on Okinawa, if 767,000 Americans were to attack Kyushu, one prediction said the dead and wounded would number 268,000, as many as the number of battle deaths that the U.S. had experienced in the war so far. As for Japanese battle death figures, they inevitably dwarfed those of the U.S. (On average, the ratio of combat fatalities was 4:1; on Iwo Jima, three Japanese died for every American; on Okinawa, that figure was 15:1; at Leyte Gulf, 20:1; on Attu, in the Aleutians, 50:1.) Japanese casualties on the battlefield by summer 1945 numbered 1.2 million total.

Nobody suggests that the Japanese be grateful for being the target of at atomic bombs — but, bearing those figures in mind, who can doubt that far more lives — as millions of soldiers and civilians rushed to the defence of their homeland — would have been lost in conventional warfare than actually were at Hiroshima and Nagasaki?

Those who criticize the Americans for waging war, nuclear or otherwise, on civilians forget that the Japanese armed forces were arming every person available in Japan, from women and children to the elderly, and with everything from advanced firearms to primitive pointed bamboo sticks, to fight the Yankee invaders to the death.

Incidentally, this was not as fanatical as it may sound at first, given their own behavior on enemy soil. The Empire of the Sun expected American soldiers to submit the Japanese people to the same atrocities — in fact, it expected the "foreign devils" to treat them worse — that its soldiers had hoisted upon foreign civilians such as those at Nanking or Manila. Japan's coming victims might as well avoid dishonour and at the same time contribute to holding back the U.S. onslaught by, if possible, taking a few enemy soldiers with them to their death. Fight to the last had been the Japanese motto throughout the war.

Thus, the war promised to become even more bloody, as it indeed already had.

Still, the atomic targets were not chosen out of the blue. "[O]ne of the most important military-command and communications centers in Japan [that] would have become the Imperial headquarters had the islands been invaded and Tokyo been captured" (The New Yorker's John Hersey), the Honshu island city was (correctly) referred to as an "important naval base" by Le Monde back in August 1945, although it is typical that in a retrospective 60 years later (scroll to bottom), the independent daily omitted all types of strategic information and all types of context, for expressions such as "martyrdom", "crimes against humanity", "a haughty indifference of the laws created by men to check barbarism", and "a graduation as useless as indecent into horror". (Needless to say, Japanese actions at Nanking and the Bataan Death March did not figure into this kind of rants.)

It has become common for some to say that the Japanese were ready to sue for peace, and that the treacherous and demagogic Americans (or their leaders, if you want to be cute) ignored the peace feelers. There's so much to say to this charge one hardly knows where to begin. First of all, we are told the peace feelers were secret. If it was so obvious as we are told that the Japanese (or, at least, their government) as a whole were desirous to establish an era of peace and goodwill (unlike the murderous Yankees), why didn't they simply make the call for peace public (and thereby stigmatize the leaders in Washington, had the latter refused to take them up on it)? If asked the question, we will be told that it wasn't that easy and that Japanese pride was involved.

Well… exactly! If pride is involved, to what extent can you be sure the peace offer — or any message — is sincere, and especially, how much power does the individual (or the band of individuals) have in proffering it if he or they are surrounded by sizable parties of prideful leaders, soldiers, and other individuals?

As it happens, if and when you get a message (be it a peace proposal or anything else) from a mortal enemy — or even from a traditional friend (think Chirac and Villepin at the UN in early 2003) — how are you to know they are sincere? Is disinformation of some kind involved? How do you know they're not stalling for time? Time for what? To prepare their fellow leaders, and the population, for surrender? (In that case, how do you know what the chances are they will be successful in the task?) Or to build more weaponry (including their own… atomic bomb!), arm more combatants, launch more attacks, and/or kill more of your own nationals?

And who would the peace feeler have been from? From the entire government (in which case they could have made it public, supposedly)? From a clique in the government? And if, so, how much power did its members actually have — and were the latter sincere, were they wishful thinkers, or might they the victims of manipulation (from those who wanted to stall for time for military reasons)?

To use a surreal example of a peace feeler (from the same conflict), in May 1941 Rudolf Hess asked for peace between Britain and Germany (after flying a Messerschmitt solo to Scotland), only to be immediately disowned by Adolf Hitler. For months — years, really — British citizens, commoners and responsible leaders alike (not to mention nervous foreigners, and their governments), wondered what secret intentions, if any, might have laid behind the feat.

Also, to what extent should we go in trusting today's Japanese accounts of their willing and innocent peace-seeking forebears?

In any case, here are some things to ponder: it is well-known that the Imperial Army was full of officers and men of the type as those who, when they learned that Japan would eventually surrender, tried to prevent Hirohito's message to that effect from being broadcast. It is also known (not least to the Navy personnel at the time!) that while the Japanese were supposedly desiring peace, kamikaze pilots were crashing their Zeros into U.S. Navy warships. What is less known is that over 400 people were arrested in Japan in 1945 on the mere suspicion of favoring negotiation.

In conclusion: the Americans were aware of the propensity of the Japanese to fight to the very end, and untold thousands had bled, suffered, and died in so learning. And for very good reasons, Americans were not very trustful of the Japanese; indeed, the formers' tendency to regard the latter as duplicitous cannot be ascribed only to racism, far from it (remember Pearl Harbor?). 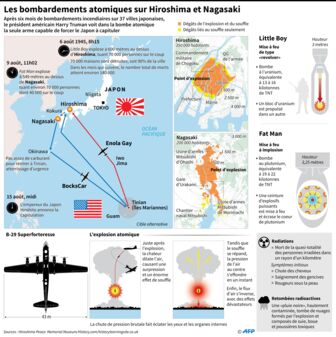 • Hiroshima 11: If Western elites cannot find perfection in history, they see no good at all; most never learned the narrative of WWII, only what was wrong about it (Victor Davis Hanson)

• Hiroshima 7: Some Facts About Hiroshima and World War II That You Hear Neither From America's MSM, University Élites, and History Books, Nor From Japan's (New York Times)
•  Hiroshima: Did Japan's top officers know a bomber was approaching Nagasaki, 5 hours beforehand, and do nothing?

• Hiroshima 1: Unlike the ends of the majority of conflicts, World War II in the Pacific grew increasingly bloody as U.S. forces approached the Japanese homeland (Erik Svane) 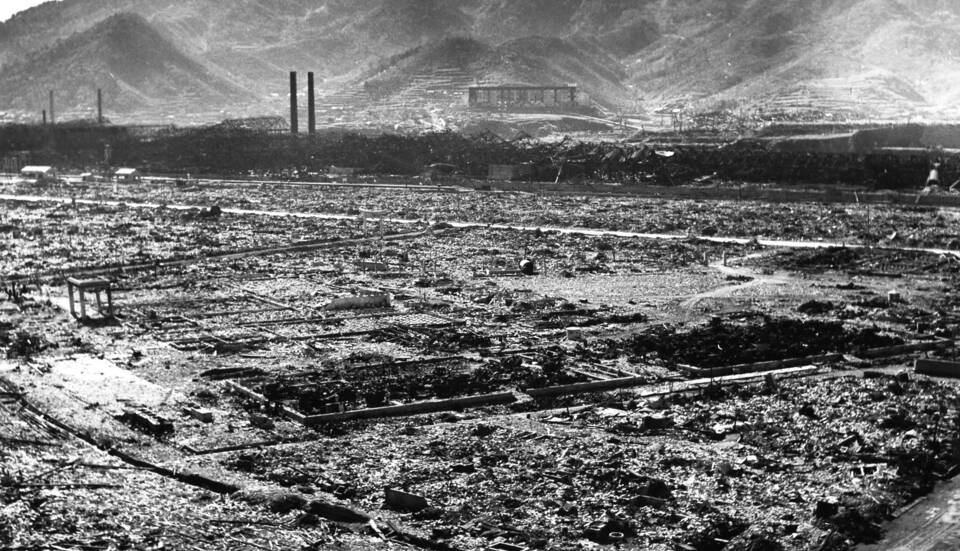