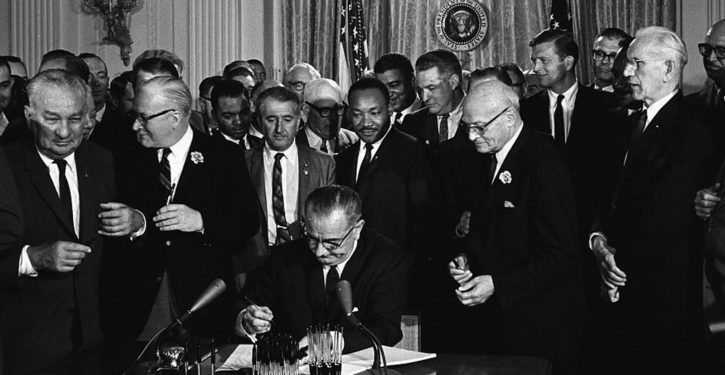 Based on by Christopher Caldwell's The Age of Entitlement (America Since the Sixties), Benny Huang signs a Liberty Unyielding post showing the extent to which LBJ’s Civil Rights Act of 1964 has undermined the 1787 Constitution of the United States.

Wasn’t it just about America living up to its founding principles?

… With the benefit of hindsight it’s clear that the bargain made on that July [1964] day was a rotten deal for almost everyone involved, including many blacks — though not those few blacks who earn their living doing civil rights litigation. The law has been very good to them. Besides being more than most Americans had bargained for, the measures also proved to be both permanent and insufficient to satisfy the need of the self-perpetuating “Civil Rights” establishment (which little by little evolved into the “Civil Wrongs” establishment) to grow and consume.

Two weeks after the bill became law, an off-duty New York cop shot and killed a black 15-year old named James Powell who he claimed had been coming at him with a knife. Harlem quickly went up in flames followed by Rochester, Philadelphia, and Jersey City. To many Americans, this was mystifying. Hadn’t the new law settled old scores?

The obvious explanation is that the riots that followed occurred not despite the CRA but because of it. The government had sued for peace by rolling over and showing its soft underbelly.

And so the riots continued throughout the 1960s, with each subsequent cluster of riots met with an ever-increasing list of wealth-transferring government programs. Leaving aside for a moment the dishonor and immorality of paying people not to riot, is it even effective? The decades of history that separate us from that time have shown that dumping money on the inner city has only provided a perverse incentive to repeat the behavior.

… And so the cycle continues into the third decade of the twenty-first century. Rioting begets concessions which beget more rioting.

Besides the monetary cost of the Civil  Wrongs Movement, there has been an even steeper price paid in terms of lost freedoms. As journalist and author Christopher Caldwell writes in “The Age of Entitlement: America Since the Sixties”:

“What the reforms aspired and failed to do — produce ‘harmony’ between the races and peace between the sexes — may have been beyond the power of any government reform to achieve. But the costs of civil rights were high. New inequalities arose. Fewer things were decided democratically. Free speech was oppressed.”

… Caldwell’s book, which I highly recommend, goes a long way toward explaining the revolution that America experienced during the heady years of Lyndon Johnson and Earl Warren. Nothing that has occurred since that time — not feminism, not Reaganomics, not the collapse of the housing market — can be understood without the Civil Rights Movement as a paradigm.

Caldwell argues that the revolution did not force the nation to live up to its founding principles but instead substituted a new Constitution for the old one. He writes:

The changes of the 1960s, with Civil Rights at their core, were not a major new element in the Constitution. They were a rival constitution, with which the original one was frequently incompatible — and the incompatibility would worsen as the civil rights regime was built out. Much of what we have called ‘polarization’ or ‘incivility’ in recent years is something more grave — it is the disagreement over which of the two constitutions shall prevail: the de jure constitution of 1788, with all of the traditional forms of jurisprudential legitimacy and centuries of American culture behind it; or the de facto constitution of 1964. …

And indeed we must choose between these two constitutions.

… The “Mrs. Murphy” … exception … serves as a good example of the kind of dissembling that the Civil Wrongs Movement pursued in order to sell the American people a false bill of goods. Knowing full well that property rights and freedom of association were the true issue at hand — not bigotry — they set out to obscure them by tossing a sop to our constitutional rights as they had been traditionally (and rightly) understood for the first 200 years of our history.

A Plethora of Quora Answers

FYI: I have now started taking to the Quora website to answer questions on various matters that I feel are important. There are answers in English, in Danish, and in French…
Posted by Erik at 19:11 2 comments: