«"Katrina's devastation points the finger at Bush's system ... Issues forgotten for years are back to the fore: poverty, the state's absence, latent racism.»

«The quotation above appeared in a front-page article in France's newspaper of record. Just below was a cartoon

[ED.: below]showing the American president watching TV footage of black corpses floating in the water. "But, what country is this?" the caption had him saying to his generals: "Is it far away? We absolutely have to do something!" 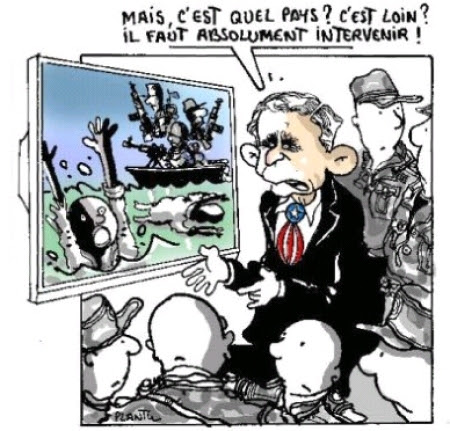 Unfortunately, this column does not come with its own cartoon attached, so I'm forced to describe the one I think Le Monde should print this week: A drawing of the French president, Jacques Chirac, watching black neighborhoods go up in smoke. The president is asking his generals, "But, what country is this? Is it far away? We absolutely have to do something!"

It is in our own interest, then, to be magnanimous and to come up with ways to assist the French. We could, for example, help them to shatter the myth that they live in an enlightened society, insulated from racial tension, by mass-mailing them copies of Le Monde with the word "America" crossed out in all editorials and the word "France" substituted instead.»Désordre profound!!! Ali-bour-tonne!!!
Posted by Joe at 12:40