Kim Foxx was elected as state's attorney on a promise to bring nuance to the law-enforcement system. Her office's handling of the Smollett case gave an opening to her critics.

For more details, see "Republicans Pounce!" Department: The "Far Right" Sees "Opportunity in Tragedy" and Uses a Muslim Refugee's Murder of a 14-Year-Old Girl as "a Political Weapon"

Update: it turns out that “Republicans rejoice” is just a variation on “Republicans pounce”.  Stephen Green saved you a click.
Posted by Erik at 22:33 1 comment:

Fire Engulfs Notre Dame Cathedral; "No Guarantee that the Paris Building Can Be Saved" 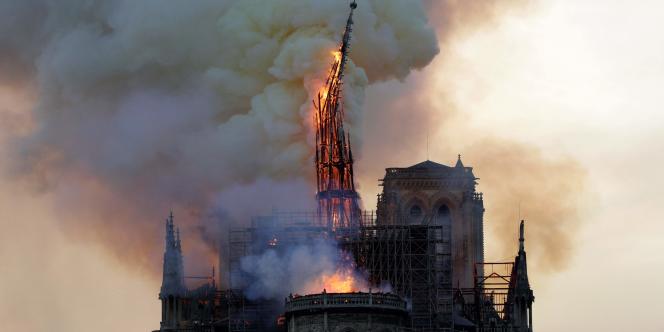 Terrible news from Paris, as gigantic flames keep leaping from the Notre Dame cathedral, and it doesn't look like it will be ending any time soon.

An assistant to the Interior minister has just tweeted (9:50 pm) that there is no guarantee that the cathedral can be saved (le sauvetage du cathédrale n'est pas acquis) while the fire chief has stated that he is pessimistic about containing the fire, which may spread to the north tower…

Just a few minutes ago, French firefighters responded to Donald Trump's tweet ("Perhaps flying water tankers could be used to put [the massive fire at Notre Dame Cathedral] out. Must act quickly!") by saying that using Canadair planes is not an option: dropping tons of water on the building could cause the entire structure to collapse.

The famed Notre Dame cathedral in Paris, France was engulfed in flames on Monday leading to the collapse of the structure's main spire. The intense flames leaped out from two of its bell towers minutes before the spire collapsed, and later spread to one of the cathedral's iconic rectangular towers.

A church spokesman told French media that all of Notre Dame cathedral's frame is burning after the spire collapsed.

"Everything is burning, nothing will remain from the frame," Notre Dame spokesman Andre Finot told local outlets.

… Paris emergency services said they were trying to salvage the artwork stored in the cathedral.

The French capital's police department said no deaths have been reported but didn't say anything about injuries.

… Sources told Fox News that it appears the fire, which comes one day after Psalm Sunday, was related to recent construction done at the cathedral.

Now is not the time to go into polemics, but at the same time, I cannot refrain from calling out the wife of the elderly French couple interviewed on TF1 (no, it wasn't Ilhan Omar) who said that when the church's spire collapsed (see above), it reminded her of New York in 2001 when the Twin Towers caved in. Again, now is not the time to revive old polemics, but if there are good news from the Île de la Cité, it is that there has (thankfully) not been a single victim…

Update — from Instapundit: “Nothing will remain from the fire,” spokesman says…

Update 2: Yes, the Notre Dame Fire Was a Tragedy; But Does It Really Warrant Comparison with 9-11 in America?

Terrekain says that
I just talked to my local Fire Marshal.

Whoever said that going for an air drop on the Notre Dame cathedral would cause it to collapse, is an IDIOT.

If it's a firefighter, he should be fired immediately.

Aerial water drops typically disperse in the atmosphere; they do not apply that much more weight on the structure than a heavy rainfall and a BURNING cathedral is in much more danger of collapsing than one that is covered and mist-doused in a fire-retardant slurry. Even if it were true that the building would collapse, the only reason to worry about that is if anybody was in the building...but artifacts and architecture are endangered by the FIRE, far more than any collapse unless we're talking about WTC collpases - we're not.

The building's structural integrity is being degraded by the fire, not any amount of water. So you just let the building keep burning?

Whoever claimed that idiocy is either ignorant, or is gas-lighting the public to make Trump look bad...it's idiocy. What were these idiots waiting for? For the entire structure to burn down?

Terrekain goes on to add that
This is like waiting for the WTC to "burn out" when you are given an opportunity to put out the fire (there was no such opportunity then, but hypothetically speaking)...

Trump: "Put it out with water".

Trump: "What are you talking about? If it's going to collapse because of an air-drop, it'll collapse ANYWAY in the time it takes you to call in the air-drop due to the fire. So why not try it and give yourself a chance?"