It only took a decade, and we had to put up with a lot of verbal abuse, but a few Europeans are finally getting at a tiny piece of George Bush’s reasoning:

The revolutionary spirit sweeping the Middle East has provoked as much fear as joy in the West. Der Standard questions why is it that we doubt that Arabs have the will or the ability to be the masters of their own destiny.

The only flaw in it, is that the author uses it to hector specific people about generic assumptions about those empty headed ”national attitudes” that all too many Europeans think make every individual tick, in highly bigoted fashion.

Perhaps the Internet and social media are having a much more dramatic impact on the general consciousness than we have assumed till now. The so-called experts really know nothing, because there has been too much flux in the past one or two years, and learned expertise often falls back on a long history – which may have been dramatically overtaken by recent social modernisation processes without the "experts" having even noticed.

If you can wade through all of that, what really means anything in all of that muck is that these “experts” that those in a newspaper induced lethargy are in are nothing more than people with opinions that they borrowed from one another in a sad bid to seem relevant, but with a pinch of memorable controversy. In reality they’re sheep: not only would the idea of will for individuals not square with their bloodlust for revolutions LED by people with attitudes that they like, but they suddenly seem surprised that all of their talking about Twitter and Facebook is more about wanting to predict the methods others use, rather that understanding that they don’t especially need them.

It must be painful when an impoverished, oppressed population doesn’t follow your script – when all you really need to do is understand natural human will, and defend individual freedoms.
Posted by Joe at 18:31 No comments:

By presenting the West as repugnant and the other civilizations as our prey, we encourage such social pathologies as jihadism

Now the French president, Nicolas Sarkozy, has joined the chorus

The other day he said, "My answer is clearly yes, it is a failure." The "it" was multiculturalism, and he was on French national television. In pronouncing multiculturalism defunct, the French president joins German Chancellor Angela Merkel, Australia's ex-prime minister John Howard, Spain's ex-premier Jose Maria Aznar, and, most recently, British Prime Minister David Cameron in heaving a failed policy into history's dustbin. The question is, what will replace it? Or actually another question: how did multiculturalism ever become a policy of these European countries anyway?

…Now the European leaders are giving this sort of tolerance of intolerance a second look.…

…So how did the Europeans end up with multiculturalism, a multiculturalism that seems to favor Islam over other cultures? … I think it started with the way they teach their history. Militarism, colonialism, and racism are all prominent ingredients of European history books, particularly British history. For that matter, American history stresses these ingredients also. I have been reading American college history texts and they present an alarmingly ugly view of the Western past.

Best Rendition Ever of The Star-Spangled Banner Is By… a… 7-Year-Old Girl?!

What to Feel Tall? Hang out with Short People!

He is an evil genius, Thank him, sofort, tous de suite, and chop chop

- Tip ‘o hat to Legionnaire of the Banned

Why not show your lurrrrve with a slightly marbled center cut?
Posted by Joe at 16:42 No comments:

The Near Distant Ago, Remembered

Those among us interested in radio will enjoy this one: one of those new fangled weblog thingies focusing on Radio Berlin International, the voice of the erstwhile German leftist dictatorship. For a collection of their QSL cards, as well as postcards from said erstwhile German leftist dictatorship, hier clicken, bitte.
Posted by Joe at 10:55 No comments:

France's Year of Mexico to Be Boycotted by… Mexico

Every year in France, the government plays host to a foreign nation (calling the commemoration and the festivities — along with the heightened business deals — the Year of Brazil, the Year of Russia, etc), but this year's bash stands out in that a diplomatic crisis looms between the host country and its guest and that, consequently, France's Année du Mexique will likely be boycotted by… Mexico.

The problem, explains Le Monde, is that Nicolas Sarkozy declared that the year-long event would be dedicated to a Frenchwoman who has sat in a Mexican jail for the past five years. Sentenced to 60 years behind bars for having allegedly joined a drug gang and participated in kidnappings, Florence Cassez is widely seen in France as being an innocent bystander falsely accused or at least as a romantic who fell in love with an outlaw and who received an unfair trial and/or too harsh a verdict…

Stamping your Feet and shaking your Little Fists in the Air Again, are we?

There’s trouble in paradise for the Alain Soral, a man who looks for Jews hiding under his bed every night.

Alain Soral was assaulted on Saturday at a book signing near the Bastille of his latest work "Understanding the Empire."

Four or five individuals surrounded Soral, asking him to apologize for some comment he was accused of making that offended Houria Bouteldja. The scuffle started when a person accused Alain Soral of having said that blacks are cannibals.

The syphilitic F. Desouche blog spends little time wondering about color, and asks the question “was he beaten up by muslims?” Such is life in the land of “intellectualism and debate.” The reason this all sounds bizarre to Americans is because it is. While the likes of Soral and even those who find him as dippy as he really is indulge in accusing the United States of “being at war with Islam,” and do a great job of parroting the Jihadists’ propaganda, French popular and even “intellectual” culture really ARE at war (in a chickenshit verbal way) with what seems like all of humanity - including Muslims.

This is how the big drama queen routine works for guys like Soral: they think that the sun shines out of their ass when they accuse and inflame people in print, and then think that the world is after them because they really think that they matter in some way to the world.

Strangely enough, the world outside of his bubble only knows these irrelevant attention seekers because of us pointing out their stale, 18th century (if not medieval) conspiratorial ravings.
Posted by Joe at 11:12 No comments:

"Not allowed to say anything bad about minorities": Provocateur routinely accused of racism, sexism, homophobia, fear-mongering, and narcissism

as much adored by the xenophobes of the far-right as he is reviled by immigrants, women and gays. But Éric Zemmour might also be misunderstood by his allies and enemies alike, a sort of hopeless intellectual whose nuance is lost in the sensationalist jumble of the media world he inhabits.

A slight man with a quick tongue and a fearsome intellect, Mr. Zemmour, 52,

has made a career of speaking on the edge in a culture where the ideal of social harmony often takes precedence over freedom of speech. He can be heard daily on French radio, read weekly in the news media and seen all over television; he is routinely accused of racism, sexism, homophobia, fear-mongering and narcissism, or some combination thereof.

“I’m reviving the ‘French polemic’ in a world that’s on the one hand Americanized, and on the other, that people want to see sterilized by antiracism, by political correctness,” Mr. Zemmour said over coffee at the back of a dark Paris cafe. “That it is to say, where you’re not allowed to say anything bad about minorities.”

In comments that his critics have parsed and denounced and parsed again, he has spoken of a “white race” and a “black race,” decried what he sees as the feminization of society and called homosexuality a social disorder. Last month, though, his pronouncements for the first time brought him before a court, on charges of defamation and “provocation to racial discrimination.”In a televised debate last March he argued that blacks and Arabs were the targets of illegal racial profiling by the French police “because the majority of traffickers are black and Arab; that’s how it is, it’s a fact.” The same day, on another channel, he suggested that French employers “have the right” to deny employment to blacks or Arabs.

The intense reaction to Mr. Zemmour’s case — and more broadly, to Mr. Zemmour himself — seems a measure of the tensions in France around race, Islam and integration. And it speaks to the difficulty of discussing those issues in a nation that is committed constitutionally to treat every person simply as a “citizen,” with no acknowledgment of ethnicity, color or religion.

…“We believe that we have the best way of life in the world, the best culture, and that one must thus make an effort to acquire this culture,” he said. By contrast, he said, the notion of a country made great by the diversity of its people and values “is an American logic.”

Asked why he believes in the superiority of the French model, he said only that “there is a singular art of living” in France.

“For me, France is civilization with a capital ‘C,’ ” he added.

The groups that have taken him to court have been urging an American social vision, he said. Yet, he added, they are not also willing to endorse American standards of free speech, and they oppose the taking of American-style ethnic statistics.

It is a delicate distinction, one even his friends worry might well be lost on most people.

…Mr. Zemmour shrugged off [the stance] of the plaintiffs in his case, as an absurd logical contortion. “They want the American model without the drawbacks of the American model, and that’s not possible,” he said.

“Maybe I’ll be convicted,” Mr. Zemmour said, with some satisfaction. “But they’ll never untangle themselves from their contradictions.”

Plantu is a Bigot 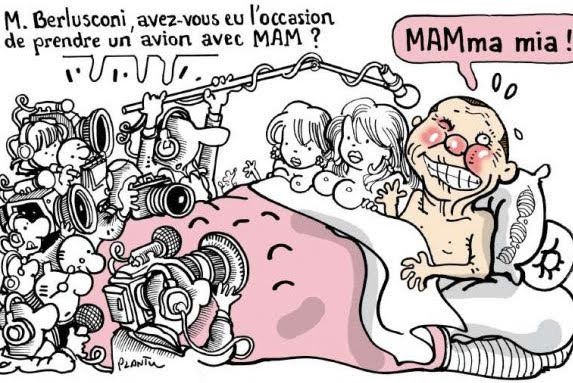 At least we know which way his taste for blow-up dolls run: these are the same figures he normally used as innocents, children, etc.
Posted by Joe at 14:40 No comments:

What is it about her that brings to mind Dr. Gumby, Brain Specialist 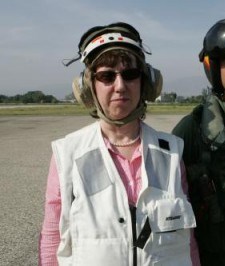