The Ugly Slobs Couldn't Fight the War Against Tooth Decay

John Rosenthal, who is one seriously astute SOB, ask rather plainly why it is the Europeans wanted to depose Muammar Qadaffi if they wern't willing to try and win it?

The Italians, it seems took a healthier approach: to just no take sides. It looks like UK and French communication fo "vital interest" rolled down-hill to hit the US and then Italy.

Secretary Clinton's inclusion of Italy in the list was dubious to begin with. In fact, from the start of the unrest in Libya, the Italian government warned about taking sides in the conflict and supporting the rebellion. For example, in an interview published on February 23 in the Italian daily

Il Corriere della Sera, Foreign Minister Franco Frattini alluded to the creation of an "Islamic Emirate" in the eastern-Libyan heartland of the rebellion. "We do not know more [about it]," Frattini told Il Corriere. "But we know that they are dangerous. There are elements of al-Qaeda there."
The Italian government's caution was hardly surprising, given that the February 17 protests that sparked the rebellion were called to commemorate protests five years earlier that had culminated in the storming of the Italian consulate in Benghazi by an angry mob. Several local residents were killed when Libyan security forces attempting to protect the consulate opened fire on the mob. The outrage of the protesters was tied to the publication of caricatures of the Prophet Muhammad by the Danish newspaper Jyllands-Posten and other European newspapers. (On the 2006 protests, see my article "Our Principles? The Libyan Insurrection and the Mohammed Cartoons.")

The Italian reluctance to support a military intervention also had to do with fears of seeing such an intervention provoke an exodus of tens of thousands of refugees from Libya, many of whom would inevitably end up in Italy. These fears have proven well founded.

But now, according to a report in the Saturday edition of Il Corriere della Sera, Prime Minister Silvio Berlusconi has confided to colleagues not only that he was opposed to the NATO intervention in Libya, but that he was pressured into making available Italian military capabilities by precisely the United States. According to the report, Berlusconi recalled that "at the time I had warned our international partners, and also at home I had explained that the operation would not be easy . . ." "But," Berlusconi is reported to have continued, "in the face of the pressures exerted by the United States, the position of [Italian president Giorgio] Napolitano, and the vote [in favor of the intervention] by our parliament, what could I do?"Thanks for throwing us another Curveball, spankers.
Posted by Joe at 13:40 No comments:

If this Doesn't Work, They'll ask you to Start Hoarding Canned Food

ECB President Jean-Claude Trichet said the central bank's controversial program of buying government paper in an effort to stabilize markets, inactive since March, was ongoing. "You will see what we do,'' he told a news conference.

The EU is setting up the ultimate moral hazard: buying up member government bonds to backstop them. They will then have to find buyers for the stuff.

It also raised questions about whether the ECB was waiting for Rome and Madrid to take extra fiscal adjustment measures before it will buy their bonds, or whether the central bank was unable to agree on widening the scope of bond-buying to them.

The ECB were certainly waited out by the "provincials" who only need to stay mum to out-maneuver Trichet.

This is the equivalent of a couple of California-sized states issuing bonds left and right knowing that the more bogus the prospect, the more likely that the Federal government will "save" them by buying those obligations up. Not only is there no-one else out there that can be bullied or to pawn this crap off on, it could cause an outflow and inflation at the same time.

Next step, of course is to see internecine cat fights. But first you'll hear some actual, real-life economics being theorized:

"I note that the Bank of Japan today launched quantitative easing and the Swiss central bank cut rates to zero. We are waiting for (ECB) decisions if possible, but desirable,'' he said. Tremonti said when he talked to Asian investors, they said: "If your central bank doesn't buy your bonds, why should we buy them?''

Bring popcorn.
Posted by Joe at 13:17 No comments:

Sometimes a Smurf is Just a Good Smoke

Reviving a truly sad academic theory from the 1980's, normally kicked around by undergrads desperate for a subject to write about, it has returned. Strangely enough, having mocked it a few times here is usually sufficient to eliminate it from the zeitgeist:

"The workers own all the capital equally, and there is no upper class of owners/capitalists to oppress them," wrote Mr. Schmidt, author of the book "Secrets of Pop Culture," in an email. "Unlike real-life Marxist countries, the Smurfs managed this feat without resorting to totalitarianism or repressing personal freedom, so it is a utopia."

In other words: Smurfs = the happy proletariat, Gargamel = USA

Yep. You read that right. It does betray some of the modern delusion people have about real, living socialism, which assumes that it's a caring, therapeutic sort of society. It wasn't and it isn't.

It held and holds rather bluntly that if you don't work, you don't eat. The ankle-biting modern promoters of "that other way" seem in large part to be allergic to the first half of that dictum.

The pedantic lifelessness of the argument wasn't enough to stop a Parisian academic, seemingly as desperate for a subject to write about as those undergrads of old.

All of the above was more than enough fodder for Parisian academic Antoine Bueno, who in June published a treatise on the topic, the aptly named "Little Blue Book." In its 250 pages, the 33-year-old university lecturer argued that Smurf society represents a "totalitarian utopia drenched in Stalinism"; in subsequent interviews, he claimed the Smurfs also were racist, and that Gargamel was an anti-Semitic caricature.

Not to mention the reaction of the "therapeutic culture":

The same Smurf fans who approved of a 2005 UNICEF television ad that depicted the Smurf village being bombed by fighter jets - the better to raise money for ex-child soldiers in Africa - called Mr. Bueno's book a disgrace. Thierry Culliford, son of the deceased Smurfs creator, called the author's take "grotesque."

Are we getting carried away here? No, the line of thought that believes that an animated feature about an anatomically incorrect panda says something about geopolitical theory has:

In his YouTube video, Mr. Topham does Mr. Bueno one better, noting widespread Internet belief that "Smurf" is an acronym for "Socialist Men Under Red Father."

And yet it the majority of humans who are told that they suffer from "false consciousness" by neo-coms and "scholars" looking anywhere and everywhere for affirmation of their ideas.

Two years ago, a Canadian professor was ridiculed for writing that Thomas the Tank Engine propagated a sexist, ultraconservative ideology. As opposed to being, well, a smiling choo-choo train.

For heaven's sake, how much more proof do you need? Isn't it obvious that Thomas the Tank Engine is an unwitting shill of the conspiratorial patriarchy rubbing their handlebar moustaches as they gurgle in glee?

Hanguk Story has got the plot.

In his dream, an American fleet invades North Korea. The protagonist and his friends try to defend by firing artillery shells made of pencils, but the protagonist doesn't know how to use protractor to aim. Overwhelmed by the evil American fleet, he wakes up from the dream. He says something along the line of "I must study hard and pay attention in class so I can be a great soldier to fight against the Americans". The rest is math lessons.

Work hard, kid. Lil' Kim needs his hookers and smack.
Posted by Joe at 14:17 No comments:

He Was Listening to The Bruce Dickinson

Police say the tourist, whose name was not released, says he was just looking for a souvenir.

Could there be any worse time to leave Paris?

asks Katrin Bennhold, a German working for the New York Times' International Herald Tribune offspring who indeed is leaving France (in spite of being six months pregnant) for a post in London.

On the long list of things to miss about France, the climate, public transport and generous amounts of vacation do of course feature prominently.

But, for this woman at least, none of that can beat a combination of free preschools, family allowances, tax deductions for each child, a paid, four-month maternity leave and to top it all off, an extended course of gymnastics, complete with personal trainer and electric stimulation devices, to get you and your birth canal muscles back into shape, courtesy of the taxpayer.

…I have another list, a much shorter one, of all the things I won’t miss about France: the overrated coffee, the smell of andouillettes, the “do not walk on the grass” signs in public parks and all the unnecessary traffic congestion due to cars piling into the intersection just as the light turns yellow. There are also the early-morning ticket controls in the Métro that in my experience seem to focus mostly on black and Arab-looking commuters.

But the No. 1 spot on this list is also occupied by something related to being a woman: A deep-seated machismo in everyday interaction that grated with me long before the Dominique Strauss-Kahn case made headlines.

Many French women appear to worry more about being feminine than feminist, and French men often display a form of gallantry predating the 1789 revolution. “Charming,” I thought, when I first arrived 10 years ago and an official in the Foreign Ministry scrambled to open every one of four doors in a very long, narrow corridor. But I soon tired of the unsolicited attention that young men sometimes heap upon women who are walking down the Champs-Élysées in a skirt.

France ranks 46th in the World Economic Forum’s 2010 gender equality report, lagging behind the United States, most of Europe, but also Kazakhstan and Jamaica. Women in France earn on average 26 percent less than men but do two-thirds of the housework.

As the historian Michelle Perrot put it to me a few months ago, “France may be Scandinavian in its employment statistics, but it remains profoundly Latin in attitude.”

And still, this is the only European country where I’ve routinely met successful businesswomen with three children and an enviable figure.

And the returns only took two days !

The epitome of leftist socio-political thought is clearly a bastion of free spirited debate and prosperity, I tell ya!

The remaining 0.3% who did not vote being the cosmopolitan evangelists of this international superpower who are out spreading the good news to the world of the fabulousness of being them. 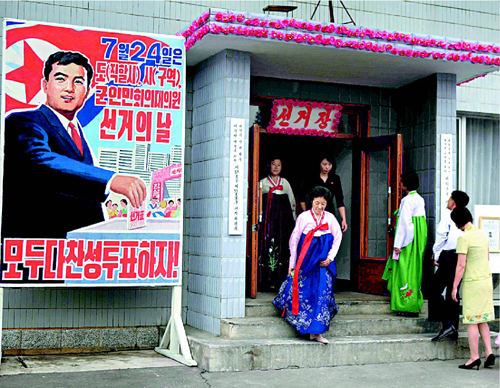