So Long, and Thanks for all the Kleingebäck

In the town of Breisbach on the Rhein river near the gateway to the Black Forest - in the most prosperous and Cutsie-poo part of Germany, we discover the success of European social solidarity and integration of outsiders, their tolerance for others, and their whimsical and rich incorporation of the host society’s values.

Two ethnic Turkish men walking in on the Christian funeral service of a dead baby violently pulled the deceased from the coffin to ritually wash it.

The two men who caused the disturbance, 62 years and 28-years-old men will appear on the 1st of August before the District Court of Breisach (Breisgau in the Black Forest).

Throughout the ritual, the two accused had forcefully pushed all the guests who wanted to intervene, a court spokesman said on Wednesday. The baby died of sudden infant death syndrome.

The 28-year-old was the biological father of the child - but never acknowledged paternity. The 62 year old father took the corpse from the coffin, stripped it, and washed it in a tub that he brought. According to court spokesman, all the mourners could see the scars from the child's autopsy. After washing the remains, they wrapped it in cloth, placed it in the coffin, and buried quite crudely by the two men.

“Trying to Make the World Safe for their Volvos”

That just about sums ‘em up. 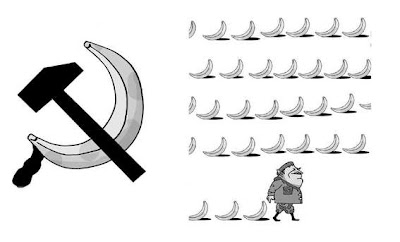 While the presidency of Hugo Chavez is denounced in a report by Human Rights Watch (HRW) — "The accumulation of power in the executive, the removal of institutional safeguards, and the erosion of human rights guarantees have given the Chávez government free rein to intimidate, censor, and punish Venezuelans who 'offend' the president or obstruct his political aims" — Paulo A. Paranagua reports on the ordeals of a political cartoonist :

For the past 20 years, Rayma Suprani has been publishing her cartoons on a daily basis in the Venezuelan newspaper El Universal. Her drawings denounce poverty, the lack of social justice and of free speech in a country where caricaturing the president can land you in prison for 30 months. Rayma Suprani is the object of harassment from the authorities which compels her to move about under the protection of bodyguards.

• See a portfolio of Rayma's cartoons

What’s Yours is Theirs’

L’Express’ personal fiance section runs down a list of things that will come under taxation assault in France. Painful and economically stupefying as they are, they don’t appear to produce much in the way of receipts.

Unearned income of all types, we are promised, will eventually be aligned with income tax rates, which is to say a nominal 34,5%. Oh joy, oh rapture.

This comes before the anticipated 75% income take rate on insufferably high income earners (<€1 Million/per annum) has yet to be announced. This is likely because they’re trying to sort out some sort of “exit tax” for people who take their wealth abroad where someone other than the government can use it. In case you think that all of this is some sort of realignment to “produce a sustainable society” that encourages personal responsibility and savings, employee savings will ONLY be taxed at a rate of 20%. On planet earth, employee retirement savings not only normally goes untaxed, but is incented by exempting it from taxable income. But since you will have less income and fewer earning prospects anyway due to the rise in income taxes generally, you won’t have a chance to save anything anyway. Whatever you have left, should you happen to actually want to shod your children’s feet or buy goods of virtually any durable sort, is subject to a VAT of 19,6%. The truly sick thing about it all is that when VAT was introduced, it was made of the argument that making goods more costly for everyone would create an incentive to save. The most common form of saves, however is subject to a 20% rate. Whatever, taxes were already punitively high, and they don’t think you made that cabbage on your own to begin with. So in conclusion, I hope your move goes smoothly, and that your new neighbors in Australia, the US, Canada, New Zealand, and the UK prove to be friendly, welcoming, and helpful.
Posted by Joe at 17:51

An article about the Pantheon in the Weekend WSJ provoked me to think about the example it represents to us in the broader context of human development.

Not only was it as good a solution to the idea of “just a dome over a drum” as can possibly be created Architecturally, it was also the first true concrete structure.

Aestheically, its’ précis is even more poetic in the economical use of ideas:

Seen from its north-facing front, the concrete-and-brick Pantheon consists of a pedimented entrance porch, a domed rotunda and a boxlike intermediate structure joining them. Their forms—triangle, hemisphere and rectangle—announce the underlying theme of pure geometry.

This is no small feat. While the Romans built arches and domes, there is no evidence that they actually understood the principals behind it. They understood their proportional thickness to span and limits of scale only by the skillful and advanced use of a much simpler principal that they used in the absence of other scientific knowledge: trial and error. This might seem like an insult to their intelligence, but it isn’t. Using a proxy for an engineering concept that you don’t have control of in order to use it is a risky strategy requiring their best engineering skills to manage.

Moreover the risk of using and evidence-based/ trial-and-error based engineering concept was high for other reasons: embarrassment in the face of failure of whomever tries it, and the ire of the powerful patron who put their resources and trust in whomever did it. Slavery or even beheading would not have been becoming when you’re a well-respected Architect in the Roman Empire or Republic, I’m sure.

We see that they cast coffers into the dome to lighten it, but we don’t know if they put two-and-two together, and understood that the space in between them turned into ribs made stronger by tie-ing them together with the concentric rings formed by the horizontal elements between the coffers. It took several centuries before we saw any rib-vaults that represent historical evidence that building technology knew and understood the concept.

The trial-and-error issue extend to the material too: they “discovered” concrete in that they thought it could do something based on making mortar. Using volcanic ash, they produced a hydrating-lime concrete without really knowing that it was the hydration that was producing something like modern concrete. The invention of modern concrete is attributed to French gardener in the 2nd half the 19th century noodling around with a better way to make flower pots, and an Englishman who observed some of the hydrating and heat generating reaction of slack lime.

So the take-away from this is that skillful use of what you know in order to do more than you know isn’t just possible, but it creates the examples that other can “reverse engineer” to determine the unknown engineering principals themselves.

So there you have it – someone had to take a leap of faith – but the results for civilization was the ability to build more and better shelter using fewer resources, and this incrementally improved the lives of more people. This whole concept is lost on modern environmentalists whose luddite outlook is based on a are nostalgia of something that never existed, and is detrimental to the largest number of people. After all, if you tried to engage in such an experiment today, they would do whatever they could to stop it because of the risk and use of resources, and immediately vilify the chemistry involved in making it as a “poison” that will only serve to pollute streams and “make the rich richer.”
Posted by Joe at 13:40

The Only Good Woman Is a Leftist Woman

Ellen Barkin tells Jon Lovitz to "shut the fuck up", reports Twitchy (thanks to Instapundit).

In order to get to the bottom of the barrel and explain the basics of leftist logic to you once and for all, I am bringing the following announcement to you in the public interest:

• The only good woman is a leftist woman

• The only good black is a leftist black

• The only good Latino is a leftist Latino

• The only good queer is a leftist queer

• The only good comedian is a leftist comedian

• And, of course, the only good white male is a leftist white male — one who supports the above-mentioned minority members.

All other members of a minority, of any minority, and all other white males — aka "2 dumb and dangerous" "right wing fuckin morons" — should hereby be advised that they have the following right: to "shut the fuck up". (Otherwise, the famed narrative might not sound as attractive…)

And if they do not — as, say, Sarah Palin, Herman Cain, and Jon Lovitz have learned (or are learning) — they will be duly ostracized (see Jonah Goldberg's take on this).

In other words, the only good member of a minority is the one who believes that (s)he is a victim — scratch that, make that "the one who knows, who knows, beyond the shadow of a doubt, that (s)he is a victim" — and that (s)he needs to support and, to vote for, the victimization party, i.e., for the Democrats. The party in which (so goes the narrative) politicians dressed as white knights in shining armor ride to the rescue of the martyred wretches…

All others? They should STFU.

(At least, until such time as they have been duly reeducated…)

In essence, to the left the only good HUMANS, worthy of decency, are the ones politically useful to them.

Jon Kahn sings America the Beautiful on Troopathon.
Posted by Erik at 09:47 No comments: