Note to Google & Blogger: Immediately Un-Ban No Pasarán's Posts on the Nazis' (Hostile) Attitude Towards the Christian Religion! 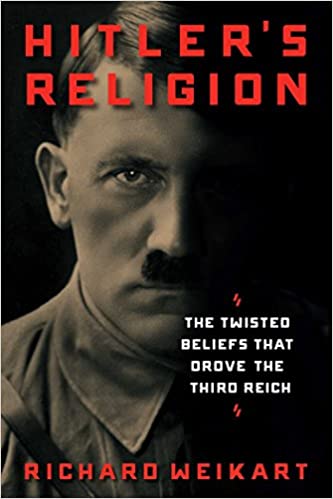 Is Google's Blogger joining the Woke Left and their Cancel culture?! (To be sure, they probably already have, and that years ago…)

Apparently, the Left cannot stomach the idea that they cannot paste the group they claim to hate the most (Nazis! Fascists!) on their adversaries and their faith(s). (By the way — quick aside — whatever happened to the importance of the so-called Godwin rule?! Dropped by the wayside, we can guess, as soon as it proved unhelpful to the Left…)

No sooner had Ed Driscoll, on September 10, linked to a post on No Pasarán (卐mas Caroling: The Extremes Hitler Wanted to Go To in Order to Replace Christianity with the “Religion” of National Socialism) than the post was removed ("unpublished").

Google! Blogger! After one week, it is time to reinstate that post — in addition to the handful of others you have removed!

The Caroling post dates from 2012: For 10 years, nobody has had reason to complain about that post for the simple reason that — like everything else we (try to) do on No Pasaràn since the blog was founded, 18 years ago — it is (or certainly tries to be) entirely fact-filled, it is entirely dispassionate, and there ought to be nothing controversial about its conclusions.

To reiterate: Barely had Ed Driscoll linked to Mark Judge's Adolf Hitler Thought More Like Nancy Pelosi Than Donald Trump piece than my 10-year-old post giving ample evidence of a campaign of Nazi hostility to Christmas and to the Christian religion was banned — as was indeed, a follow-up post three days later replying to a couple of wise-ass leftists in the comments section alleging that my post was wrong.

The following day, September 11, I discovered that three other posts were "shut down" on No Pasaràn very recently, on August 25, i.e., two weeks after the banishment as well as between Ed's posts of July 16 and of September 10 linking to No Pasarán's 卐mas Caroling. It's not entirely clear when that post — which Instapundit has linked to a few times over the years (Danke schön, Herr Driscoll und Professor Reynolds) — was removed, i.e., the fourth to be "unpublished."

The three other posts banned, all at least seven years old (!), are:

• Adolf Hitler in Religious Surroundings: Is There Really Evidence That the Führer Was a Christian? (December 2012)

• By laying the crusades at the feet of Christianity, Obama was unwittingly laying ISIL's atrocities at Islam's feet  (December 2015)

• Homo Scandals? Reporters are quick to self-censor when they have reservations about the damage their stories might do to beloved causes (the latter, from December 2014 — which in my mind was the least uncontroversial of the lot given its focus on the gay agenda — was restored within an hour or two of my complaint on September 11, 2022, and is the only one so restored)

When going into Blogger, I find the post(s) concerned "unpublished", i.e., reverted to Draft status (that's where the four screenshots in this post come from), along with the option Request review and with the message

Except they never indicate which part(s) of the content is (are) in violation of the guidelines. It's not like they are highlighted in yellow or marked in red or something.

Incidentally: if any reader(s) have any information about how to contact Google, Blogger, or Facebook in a more reliable way, their input — to be published in Instapundit's and/or No Pasarán's comments section — would be much appreciated.

Facebook? Wait a minute! Why mention Facebook at this time? Because on the day after the 2020 election, and without any kind of warning, I was totally banned from Zuckerberg's website. Almost two years later, I have still not been reinstated or, indeed, ever received any reason whatsoever for my banishment (my Facebook page was a place where I studiously tried to avoid politics), either as a courtesy or an automated reply or as a written answer to my (numerous) attempts to contact the powers that be.

Google! Blogger! There are not one, but two books that provide the exact same correction to the historical fallacy (the… lie?) that Adolf Hitler in any way was associated with Christianity.

Besides Richard Weikart and his Hitler's Religion, we have Ray Comfort, whose “Hitler, God and the Bible” points out der Führer devised a master strategy to crush all Christian churches, explains that it would be either ignorant or disingenuous to call Hitler a Christian:

recognized as a purpose of the National Socialist Movement.”

… The CBN program explains how Hitler put on a religious, even Christian, façade, until he became powerful.


… But later one of his inner circle acknowledged: “I’m absolutely clear in my own mind, and I think I can speak for the Fuhrer as well, that both the Catholic and Protestant churches will vanish from the life of our people.”

There are also numerous articles or fillers from respected (and usually left-leaning) periodicals — all duly linked by this… very blog (!) — that provide the same correction to the historical fallacy (or lie), which is in fact easily witnessed to by simply referring to such Nazi slogans as "Kirchenkampf" and "Out with Jesus!"

They include to The International Herald Tribune, Life Magazine, and  The Daily Mail, along with Denmark's foremost historical publication. Google and Blogger: do you want to ban those periodicals as well?

• Kirchenkampf: Hitler Was Determined to Diminish the Number of Catholic Schools (The International Herald Tribune)

• "Out With Jesus": During His 12 Years in Power, Hitler Tried to Ban the Tradition of Christmas (Denmark's Historie monthly)

• Worshipping Little Else But the Aryan Race, Hitler Abhorred the Christian Faith and Wanted to Replace Christmas with the Pagans' Yuletide (Life Magazine)

One week is more than enough, Google and Blogger. Stop the hysterics, ignore the fearmongering, and re-publish my posts. All of them. Now. (And thanks for linking this post, Instapundit.)

"All the News that's fit to ignore." However, this post has been re-published…
Posted by Erik at 10:58 9 comments: