Is it unreasonable to ask people who want to live in open societies to show their faces to the community? 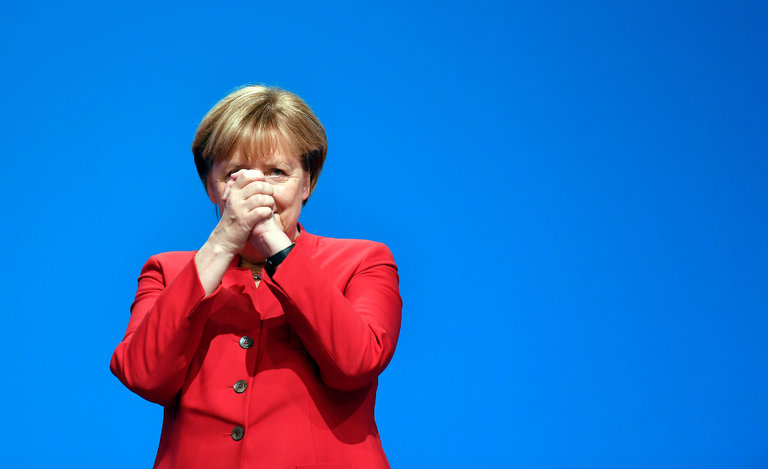 
I am a woman, a feminist, a Democrat, an enthusiastic Hillary Clinton supporter, the proud mother of a lesbian, a progressive Christian, a supporter of civil rights, a believer that Black Lives Matter, and a welcomer of refugees and other immigrants.

Yet because I oppose the wearing of the full Muslim veil in public, which functions as a face mask, [the New York Times] would label me a bigot [“Veiled Bigotry in Germany” (editorial, Dec. 8)].


People may feel that masked people in public are vaguely sinister and threatening; one instinctively looks at a person’s face to see whether this is a friend or a foe. It isn’t bigotry.

While the wearing of the veil may be protected speech here, it is not unreasonable to ask people who want to live in open societies to show their faces to the community. This is not bigotry.

By Inserting a Modifier Before the Words that Are Valuable to Society, Says Evan Sayet, the Modern Liberal Changes the Meaning of Concepts Like "Correct," "Justice," and "Violence" 180 Degrees

Wednesday No Pasarán gave you some key excerpts from Evan Sayet's 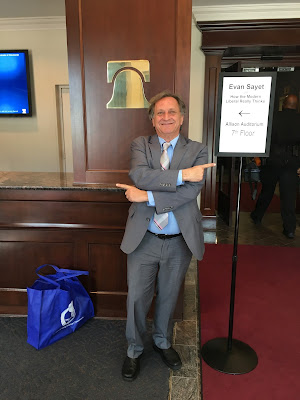 ten-year anniversary speech at Heritage Foundation on How the Modern Liberal Thinks: And Why He’s Convinced That Ignorance Is Bliss (thanks to Duncan).

One of the main weapons of the Modern Liberal, Evan Sayet said during the lecture which was introduced by Becky Norton Dunlop, is language:


I want to talk a little bit about the language of Modern Liberalism. Because since the Modern Liberal is always wrong, he has had to find a way to manipulate the language, to turn wrong into right. And you will notice there is a pattern, this is something he does repeatedly, he takes what is valuable, what is important, what is important to us, as a society, and then he inserts a modifier, just before the word, that changes the meaning of the word 180 degrees.

Since the modern liberal is never correct, he inserts the modifier "politically" before the word, and it switches the meaning of the words 180º.

I'll give you another example: dear to our hearts, central to our purpose, is the concept of justice — justice being (I made up this definition, but it works for me) the closest possible wedding of behavior to outcome. If you work hard, if you do the right things, justice requires — justice doesn't always prevail — but justice requires that you be rewarded. If you do the wrong things, justice should see you in some way hindered or punished.

So that you and I will look at something like Ferguson, Missouri, and while it saddens us to the core that Michael Brown died, there was no injustice in that outcome — it was closely wedded to Michael Brown's own behaviors. But to the Social Justice Warriors, Michael Brown is a hero, there is a plaque in Ferguson, Missouri, and [their] justice required that Darryl Wilson and others, police officers, they are the bad guys, not because anything they did made them bad, but because social justice is the antithesis of justice. …

Modern Liberalism is also the antithesis of Judaism. The great gift of the Jews was the concept of justice, the idea of an eye for an eye and a tooth for a tooth — which sounds and is misused by many to mean vengeance, it doesn't mean that in the slightest, it means the exact opposite. So one of the first times in human history that it was codified that the punishment should not exceed the crime — it didn't matter if you were a pharaoh, and somebody stepped on your toe, you couldn't kill their families — the punishment should fit the crime. Modern Liberalism, the dominant ideology of today's Democratic Party, is the antithesis of Judaism, the gift of the Jews is justice, but the Modern Liberal does not believe in justice, he believes in its antithesis. 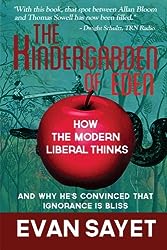 The author of The Kindergarden of Eden (How the Modern Liberal Thinks), also on Kindle, concludes his speech by giving us a third example, one "so ludicrous … it would be funny if it wasn't so horrifying," from Hollywood honchos responding in the 1990s to charges of violence in gangsta rap and in the movie industry. The producers replied that, compared to their own "realistic violence", everybody seemed to be ignoring


the worst kind of violence of all … the psychic violence of (beat) the Bill Cosby Show. [!] … It's insane. But once again you see that [the Modern Liberals] have inserted the modifier [psychic] before the word, and it quite literally spins the meaning of the word 180º.

Question time starts at 48:00, with the second question going to a blogger from No Pasarán.

Evan Sayet: The only way not to be a bigot is to never think at all … The first time you do think is the last time you're a leftist

Evan Sayet returns to Heritage to revisit his

“unified field theory” of Liberalism and break new ground in explaining the ideology that he argues leads those on today’s Left to ignore the facts, manipulate the evidence, reject reason and, in doing so, end up not only always wrong but always as wrong as wrong can be.

Ten years after his momentous speech on How the Modern Liberal Thinks — the "single most-viewed lecture in Heritage Foundation's entire history" was called by Andrew Breitbart one of the five most important conservative speeches ever given — Evan Sayet returned to the Heritage Foundation (following a stint at CPAC) to be introduced by Becky Norton Dunlop for a tenth-anniversary re-do (thanks to Duncan), similarly entitled How the Modern Liberal Thinks: And Why He’s Convinced That Ignorance Is Bliss.


[after 14:40] In the 1980s, thinking was outlawed.  It was deemed by the left to be a hate crime. … The only way not to be a bigot (beat) is to never think at all. … It's actually a utopian ideology … the mindless foot-soldiers, those who have been indoctrinated, they believe that if you eliminate thinking — because thinking is an act of bigotry — you can eliminate bigotry. And if you eliminate bigotry, the world would be a place where everybody loves one another, and: kumbaya. … So the Modern Liberal is raised to believe that indiscriminateness is a moral imperative, because it will bring about paradise.

Be sure to check out his comments about Steven Spielberg (the man behind Munich is "a terrific director") and especially the writer of Born in the USA ("I am the world's biggest Bruce Springsteen fan — I think he is a lyrical genius, I think he is a good and decent man, I also think when it come to politics he's an idiot") and his protest song about the Vietnam War.


[29:50] I have an expression: The first time you think is the last time you're a Democrat


The biggest difference between the left and the right [is that] we recognize the existence of the better … But because the liberal does not believe in the better — while we spend our lives trying to better ourselves — they spend their lives just being—themselves. And its the same self they were, unchanged.

One class of organization that are designed to better ourselves is the 12-Step Programs, and Evan Sayet concludes his comments on Alcoholics Anonymous and the like-minded groups inspired by AA with this thought:


One of the really childish things, and more evidence that [the leftists] really are children, is the hyperbolic language that they use, that's reminiscent of children … It's true. If George Bush is Hitler, Barack Obama is God. Truly: Evan Thomas, a once important reporter for a once important newsweekly called Newsweek — imaginatively — said "Barack Obama stands above us like a god." And this is nothing new, of course it doesn't even have to be anything that's real, the real world doesn't even contain their hyperbolic talk. So: Dick Cheney was Darth Vader, while John Kennedy was a mythological character living in Camelot. And this is very much the same conversation, the same thing, you hear from a 5-year old child, where if they get what they want, you're the best mommy in the whole wide world, and if you don't get what they want, you're the worst parent who's ever lived. It's the same hyperbolic thing…

That was from question time, which started at 48:00, with the second question going to a blogger from No Pasarán.

And don't forget: Evan Sayet is the author of The KinderGarden Of Eden

(How the Modern Liberal Thinks), also on Kindle.

Related: By Inserting a Modifier Before the Words that Are Valuable to Society, Says Evan Sayet, the Modern Liberal Changes the Meaning of Concepts Like "Correct," "Justice," and "Violence" 180 degrees

At CPAC in the Gaylord resort's Potomac Ballroom, Da Tech Guy interviews two Pennsylvanian gals, Carla and Michelle, in what seems to be the special Pennsylvania section at CPAC.

Being interviewed by Peter Ingemi earns each interviewee a cannoli every year (the final and most important question of all: "May I offer you a cannoli?"), but because women often seem to be (trust me on this) on a diet, they often pass, although one of them "passed" her Italian dessert over to the (lucky) webmaster of No Pasarán.

Joy Villa Is the Keynote Speaker at March4Trump's D.C. Event At the March4Trump event beside the Washington Monument:
Joy Villa Speaks At the March 4 Trump Rally In Washington, D.C.

Applause at March4Trump Event in Washington, D.C., for Savvy Insights About Statue of Liberty and Emma Lazarus Poem

During the March4Trump event beside the Washington Monument on the capital's mall, one Paris blogger got up (at 8:50) to speak about the era of the drama queens and to read excerpts from one Tennessee native's insightful thoughts about the Statue of Liberty and and the Emma Lazarus poem.