3 Political Scandals of the Past 12 Years in the USA, and How the MSM Managed to Find the Culprits

1) WHO IS GUILTY?! In the aftermath of Hurricane Katrina in 2005, rescue efforts were bungled in the largest city of Louisiana. Who should be blamed for the scandal?

Should it be the mayor of New Orleans?

Well, ain't Ray Nagin a Democrat? So: scratch that.

Should it be the governor of the Pelican State?

Well, ain't Kathleen Blanco a Democrat? So: scratch that.

Hold on: who's in the White House? Ain't it a hombre by the name of George W Bush? And ain't he a Republican?! Yup, it certainly appears so. Well, there you go! (Snaps fingers) Nailed it!

2) WHO IS GUILTY?! In 2014, lead poisoning was found in the water supply of the town of Flint, Michigan. Who should be blamed for the scandal?

Hold on: who's in the White House? Ain't it, lessee here, this fellow by the name of Barack Obama? And ain't he a Democrat? So: scratch that.

Should it be the mayor of Flint?

Well, ain't Dayne Walling a Democrat? So: scratch that.

Should it be the governor of the Great Lakes State?

Hold on a second: ain't Rick Snyder a Republican?
But of course! (Snaps fingers) Nailed it!

3) WHO IS GUILTY?! In 2018, a false ballistic missile alert threw Hawaii into a panic. Who should be blamed for the scandal?

Should it be the governor of the Aloha State?

Well, ain't David Ige a Democrat? So: scratch that.

Should it be the legislature of Hawaii?

Well, ain't the state's senate 100% Democrat? And isn't its House of Representatives Democrat, 46 to 5? So: scratch that.

Hold on: Who is in the White House? (Lemme think…) Ain't it a dude by the name of Donald Trump? And ain't he a Republican? Well, there you go! (Snaps fingers) Nailed it!
Posted by Erik at 10:12 No comments:

But What Is Worst of All About Trump Is…

A cartoon by Bob Gorrell
Posted by Erik at 18:15 No comments:

What Kind of Startling Groups Might Tend to Agree with Trump About "Shithole Countries"?

Let us assume, like PJMedia's Jim Treacher, that the president indeed used the expression "shithole countries."  What is even more important, is the following question:

What kind of surprising groups might tend to agree with President Donald Trump on calling places like Haiti, El Salvador, and various nations in Africa "shithole countries", not to mention many others?

No, no, you're wrong: the answer is not those revolting racists who belong to the despicable Republican party.

Of course, the leaders of those countries, the politicians of these nations, the élites of these entities are offended by words to the effect of Donald Trump's, and this is what the Democrats and what leftists, not only in America but the world over, are all upset about.

But the people of these countries? Needless to say, many will state in no uncertain terms that they find it insulting to hear a foreign head of state make that kind of comment — especially when the country's media is showcasing the alleged insults while constantly lauding their leaders (just like America's MSM is constantly perpetually Republicans' alleged sins while incessantly lauding the Democrats' honchos).

But you start talking privately to individuals from these lands, whether in their home nations or abroad, and not in front of a camera but in private, and you would be surprised to hear how many individuals agree if not with the wording itself, certainly with the sentiment behind it.

Indeed, isn't the very fact that so many of these citizens are emigrating to America, or to the West, in the first place a pretty strong sign of what they think, if not in those exact terms, of the regions they were born in?

But it's not only those attempting to emigrate.

What might Africans, whatever their status, think of Zimbabwe, which for three to four decades remained a kleptocratic dictatorship and which, truth to tell, does not show many signs of improving?

What might Africans think of Uganda, whose citizens have been murdered in the hundreds of thousands over the decades, by the likes of Idi Amin Dada?

What might Africans think of those countries of the continent which, since they became "independent" (sic), have not laid a single mile of new road?

Are white people, in the West or from elsewhere, prevented from making the logical conclusion and — despite the protests of Black Lives Matter — thinking the exact same thing?

2) The second jaw-dropping answer to the question of what group of people would tend to agree (again, only in private) if not with Donald Trump's words, at least with the sentiment underlying his comment, is even more startling: it is (yes) black Americans in the United States. 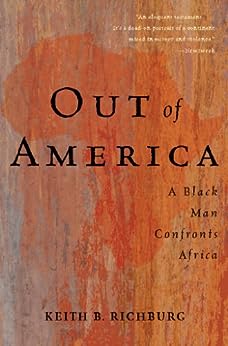 Indeed, African-Americans, just like their Irish, German, and Scandinavian counterparts, are in the habit of drawing up plans for vacations in the homelands of their ancestors, if not to find the exact town of said forefathers, at least to visit the regions they used to live in.

The U.S. blacks' reaction to their trip, although it is not given publicity in the MSM and in academia (since that would undermine the left's custom of fueling outrage while intensifying victimitis), has been repeated again and again and again: seek out some white person, a friend or an acquaintance or even a total stranger, after they have returned home to the West and tell them: "I am so happy that one of your ancestors made my ancestor a slave and took him (or her) away from that God-forsaken place." (See, for instance, Keith B. Richburg's Out Of America: A Black Man Confronts Africa.)

And the label "$#!+hole countries" applies not necessarily only to countries that are considered part of the Third World.

When I lived briefly in Brazil, I was (mildly) shocked to hear this general sentiment all the time — it was not necessarily an expression containing the word "merda", but words to the effect that the nation was a screwed-up chaotic mess.

I remember going to a bank in Rio to withdraw some Brazilian reales and being dumbfounded to see a line of over 60 Brazilians waiting in line for the counter. That's right, for a single counter.

I asked to speak to a bank representative, in order to show her the predicament we were all in. I was even more dumbfounded that, in spite of the huge crowd of people in the large waiting room, she didn't immediately understand why I had called upon her. So I voiced my concern: Couldn't they open half a dozen more counters, or even one, to expedite the humongous line of people more rapidly? This was not possible, she said, and promptly went back to her office.

I must have looked twice as dumbfounded, because the Brazilians were laughing. Didn't I know that this country was "um bordel," they told me, that I was in "um país de merda"?

And it is not only nations of the Third and Second Worlds, or even non-white nations, that are labeled "$#!+hole countries."

Do you know how many times here in Paris I have heard France called "un pays de merde"?

I can't count them, they are too many. Not by expatriate Yanks, or by other foreigners. But by the French themselves.

Lately, it has been in response to the government's harebrained decision to lower the nation's speed (sic) limits even further, on secondary roads (from 90 km/h to 80), while adding ever-higher technological contraptions to the ubiquitous radar system, meaning an ever-stronger heightening of the repression, the persecution, and the extortion of the French car driver.

In other words, a "$#!+hole country" can be defined as this: it is the sentiment of living in a corrupt, dysfunctional, crime-ridden place where bureaucracy is rampant; where common citizens are regularly screwed by the authorities; and where there are few, if any, opportunities for the people to move up, or to get more wealthy (and thus more independent), unless they belong to, or knew someone in, the élites.

In that perspective, is it any surprise how delighted the élites the world over were with Barack Obama?!

A man who was more comfortable in the presence foreign leaders and "dignitaries" along with other élites than, arguably, with the American people or, indeed, with members of the Republican opposition.

A man who would finally make Americans happy (how lucky they are!) by saddling them with more taxes, more bureaucrats, and more red tape.

A man who, finally, would shame the population about their sins, real or alleged, and who would ensure that America too would become a place where there are no opportunities for the regular folk to move up, unless they were, or knew someone, in the élite and a place where they would be regularly screwed by the authorities.

(If you counter that, truth to tell, Obama was, and remains, highly popular with common folk the world over, isn't this, again, due to the — often national-controlled — media outlets who were/are as obsequious in describing him and his movement as the American press was/is?)

The "$#!+hole countries," in turn, make a huge effort to describe as a horrendous nightmare (i.e., as a "shithole country"!) the only land where this is least the case, the U.S. of A. Those efforts hardly exclude the Europeans (Frankfurt School, anyone?) sent across the ocean to teach American youth at school and in university in the United States.

My father was a diplomat, and in my youth, our family was posted abroad (often for three years at a time) in places such as Denmark, Belgium, and France, where my parents often had the good sense to put me in a local school instead of an international one, in order for me to learn foreign languages. What was interesting was that in all these places part of the history lessons that schoolchildren learned was often the same: they were taught all about the injustices in the United States, from the tragedy of slavery in the South to the tragedy of the Indians.

Apparently, indeed, a number of countries consider and/or advertise America as (the equivalent to) a "shithole country," especially when a Republican is in the White House (former French culture minister (!) Jack Lang has just called Trump a "président de merde"), while this is in the respective countries' curriculum taught to their youth.

Because it ain't only foreigners who view America thus, is it, along with Americans (or at least Republican conservatives) as (shall we call them) "shitheads," is it?

Isn't it the never-ending harangues about the horrors of the nightmare named America, and Western civilization itself, from liberal academia, Hollywood, and the mainstream media that result in our children becoming drama queens who demonstrate in the street, who join Antifa, who tear down statues, who chant that "America was never great," and who grow up to become reporters who go seeking for the next victim group?

Related: Andrew Klavan — Nothing scandalizes a leftist like the truth
Posted by Erik at 11:11 No comments: