M. Gaston Calmette, director of the ‘‘Figaro,’’ was yesterday shot and killed by Mme. Caillaux, wife of the Minister of Finance, in his bureau in the offices of that newspaper

writes the New York Herald in a special section.


Mme. Caillaux called at the ‘‘Figaro’’ offices about five o’clock in the afternoon and asked to see M. Calmette. After waiting a while, she was shown into M. Calmette’s office

and immediately drew from her muff an automatic pistol and shot him three times. The shooting was the sequel to the campaign recently waged against M. Caillaux by M. Calmette in the columns of the ‘‘Figaro.’’ At the police-station, Mme. Caillaux declared that she did not intend to kill M. Calmette, but wanted to ‘‘teach him a good lesson.’’ She explained to the police commissary that the affair arose out of a letter which M. Caillaux wrote in 1901 to a woman, a photographic reproduction of which appeared in the ‘‘Figaro’’ last Friday. Mme. Caillaux said that she was very shocked by the publication of such a letter, and declared that she wanted to prevent any more letters of the kind being published. An eye-witness of the tragedy declared later that M. Calmette, as he was being carried downstairs, preparatory to being removed to hospital, said, in a fainting voice: ‘‘I have never done anyone any harm, but I have merely done my duty.’’

Check out Herbert Mitgang's book review of
Edward Berenson's The Trial of Mme. Caillaux
Posted by Erik at 18:00

Racism on French Campuses on the Rise

… [French] campuses are more and more the targets of bullying actions from extreme right groups; racist, homophobic, and nationalist graffiti; and even sometimes blows

While America and the world bemoan the dark racism that allegedly exists throughout America, Isabelle Rey-Lefebvre writes in Le Monde that French university campuses are permeated with racist acts

No word, yet, on whether, like their American counterparts, many if not most of these "racist" incidents turn out to be hoaxes.
Posted by Erik at 14:00 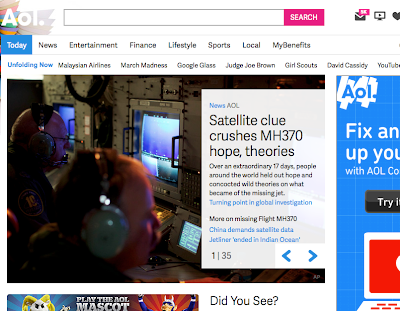 Credit a leftist organization like Huffington Post and/or AOL to use the main, "front-page" article currently on the site (1st out of 35), the one written by ADAM GELLER and KRISTEN GELINEAU on a pretty serious subject — the disappearance of the Malaysian airliner, Flight MH370 — to… make (or to relay, rather) a Sarah Palin joke.


… when a fake news story showed up online supposedly quoting Sarah Palin as saying she believed the plane had flown directly to heaven, its plausibility hinged not on the former Alaska governor, but on the fact that just about anybody could and seemingly did have an opinion on the flight's fate.

Sending a Strong Signal to Russia 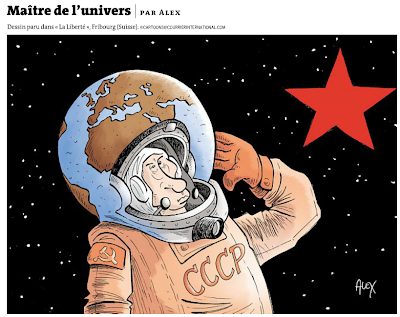 Master of the Universe
by Alex in
La Liberté
(Switzerland) 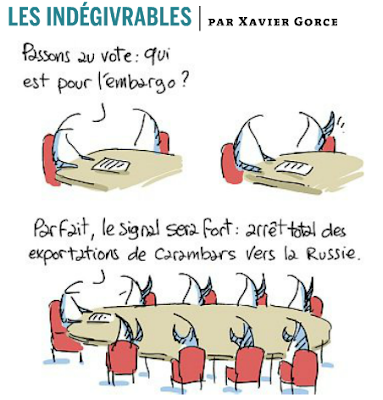 • Okay, let's take a vote: Who's in favor of the embargo?

• Perfect, that will send a strong signal: a full halt to chewing gum exports towards Russia

Smart Diplomacy: what is happening in Eastern Europe now is as much Obama’s fault as it is Putin’s


– and particularly what America thinks … it seems that every step the Obama administration has taken over the last 5+ years has led us to this point. Whether it was Hillary Clinton’s “Reset” button, Obama’s pledge of flexibility once the 2012 election was over, Obama’s recalcitrance on Syria, or Obama’s impotence on Iran… every foreign policy misstep has brought us down this road. In fact, I think it’s fair to say that what is happening in Eastern Europe now is as much President Obama’s fault as it is Vladimir Putin’s.

Meanwhile, James Rosen points out how,


among ethnic Russians, and in the heart of the former Soviet Union, a palpable anti-American sentiment is discernible -- and it is, to some extent, the product of determined efforts by Russian President Vladimir Putin and the Kremlin apparatus he controls.

No Pasarán wrote about this in October 2012 after the third debate when a New York Times piece, of all places, provided fodder for the post Moscow's current tone is "reminiscent of Soviet days"; If anyone is stuck in the Cold War mentality, it is the Russians. James Rosen, again:


"Friends of mine who have been in Moscow for the past, say, two years tell me you cannot understand the amount of propaganda, anti-U.S. propaganda, that is being fed to the Russian people on Russian television -- nothing like it, unprecedented," said Daniel Henninger, deputy editorial page editor of the Wall Street Journal, in an appearance on Fox News' "Happening Now." "They didn't even do this sort of thing back during the Cold War."

Fox Butterfield, Est-ce Vous? "Coincidentally, perils in Ukraine are on the rise at a time when the U.S. is announcing a reduction in military personnel"

"Coincidentally" are the first words of Corine Lesnes's article, as the Le Monde writer seems to be channeling Fox Butterfield (Renard Champdebeurre in French?) when she says that by coincidence perils are on the rise at a time when America is disarming, disarming to a level prior to World War II.


Coincidentally, the increasing perils in Ukraine come at a time when the United States is announcing a reduction in military personnel. In the 2015 budget presented on March 4, Barack Obama included a realignment of the armed forces that reflects its major strategic choices: an end to deployments in Iraq and Afghanistan, adapting to new types of missions, a pivot towards Asia. According to the proposals presented to Congress by the Secretary of Defense Chuck Hagel, the army should decrease from 522,000 men to 440,000 or 450,000 before 2017, the lowest level since 1940.

Tenth Anniversary of My First Post for No Pasarán

A few weeks after the founding of No Pasarán, 10 years ago, I was invited to join as the blog's fourth blogger (after Douglas, Jonathan, and Liminal aka U*2, and prior to N Joe). Today is the anniversary of my first contribution:

Any of you who have seen me over the past 10 days knows how furious I get anytime I read or hear the French media trying to stuff down our throats their self-serving lying charges (those against Aznar, Bush, and Blair, i.e., anybody whom they don't feel any sympathy with).

So when I read that the Mémorial de Caen was organizing a conference with Jean-Marie Colombani, among others ("QUELLE LIBERTÉ POUR L'INFORMATION DANS UN MONDE INQUIÉTANT ?", organized in tandem with Les Amis de l'hebdomadaire La Vie and Reporters sans Frontières), I knew I had to attend. I wanted to give Le Monde's director a piece of my mind (in a diplomatic manner, natch). Three hours before it started at 7 pm on March 23, 2004, I jumped into my trusty jalopy, and drove the 260 km to Caen, arriving just in the nick of time.

And sure enough, the first thing any of the five intervenants did (with a constant wry smile on his face) was to attack the lies of politicians, ridicule the partisanship of the media, and bemoan the jingoism of the population (meaning those of the US, the UK, and Aznar's Spain exclusively, bien sûr). It was Jean-Marie Charon, "Sociologue des médias" (whatever that means), who opened the débat — the others being (left to right on the admittedly unclear photo) Colombani, Walter Wells, Directeur de l'International Herald Tribune (beard), Jean-Jacques Lerosier, Grand reporter à Ouest-France, and Jacqueline Papet, Rédactrice-en-chef de RFI, with the moderators answering to the names of Daniel Junqua, Journaliste et Vice-président de RSF, and Jean-Claude Escaffit, Journaliste à La Vie et Directeur des Amis de La Vie.

Before I left Paris, I'd reviewed and written down (in telegraph-style) a handful of arguments: these ranged from the Iraqis quoted in Reason, on Iraq the Model, and in Le Monde itself, to Doug's post on Le Monde's partisan mistranslation of Michael Ignatieff's piece in the New York Times.

The only problem was a rather big one, I learned as a I headed for my seat: questions would not be permitted, except in written form on small pieces of paper handed over to one of the animators. So I knew I had to pay close attention if I wanted to find an appropriate moment when to jump in. And I would obviously not have time to develop any of the arguments (especially since Eskaffit seemed to be a control freak).

Eskaffit was growing increasingly more vocal in asking/telling me to keep quiet (shades of Chirac?) — he claimed that "de toutes façons", nobody could hear me — so seeing the end approaching (and having a hard time competing against a microphone), I pulled out my final ace — the final ace being a book, which I held above my head. (Yes, there did seem to be a somewhat theatrical element to this scene; why do you ask?) "Et en matière de mensonges, il y a ce livre d'un rédacteur de La Croix, qui a été licencié pour l'avoir publié, qui s'appelle Comment la presse nous a désinformés sur l'Irak. Et qui raconte les partis pris des Français pour diaboliser Bush, pour sanctifier Chirac, et pour communier avec les partis de la 'paix'."

Even a few audience members had by now started to tell me to keep quiet, but that seemed an appropriate place to end anyway, so with that I sat down.

As for Eskaffit, he went on talking to the intervenants… ignoring completely what I had said. (While a couple of people behind me asked to see the book.) Well, I felt I had done my blogger's duty, so to speak, so I sat back, pretty content with myself.

Then, as Junqua made his last remarks, I understood that some people had heard me; the RSF moderator surprised me by pulling out his own copy of Alain Hertoghe's book (which he had in his briefcase), and explained that it provided a negative view of the French media during the Iraq war. But then he added that there was another book, detailing the French press's doings during the first Gulf war, with a positive slant, and that one could not read the first book without comparing it to the second. He tried to conclude that Hertoghe's book was a partisan "brûlot" that was not very friendly to his colleagues. (This from a colloque which had just declared that, happily, the old tradition in the press of refusing to criticize one's colleagues had now become "caduc"!)

I wasn't going to let him get away with that as the final word, so I let out another comment: "Les médias ont complètement censuré ce livre!" (But Eskaffit immediately started interrupting again.)

Afterwards, I went up to speak to some of the intervenants. Wells asked to see Hertoghe's book, which he wanted to check out. As for Junqua, he admitted it was news to him that the La Croix editor had been fired as a result of the book's publication.

So, all in all, a satisfying 10 minutes. (But hardly worth doing again, not at that distance. At least not without a couple of chums to have a drink with, afterwards.)


P.S. This is my first post for ¡No Pasarán! Muchas gracias, amigos, for inviting me to participar.
Posted by Erik at 20:03