Watergate is nothing by comparison; that scandal involved people not employed by the government — Watergate did not involve the DOJ and the FBI 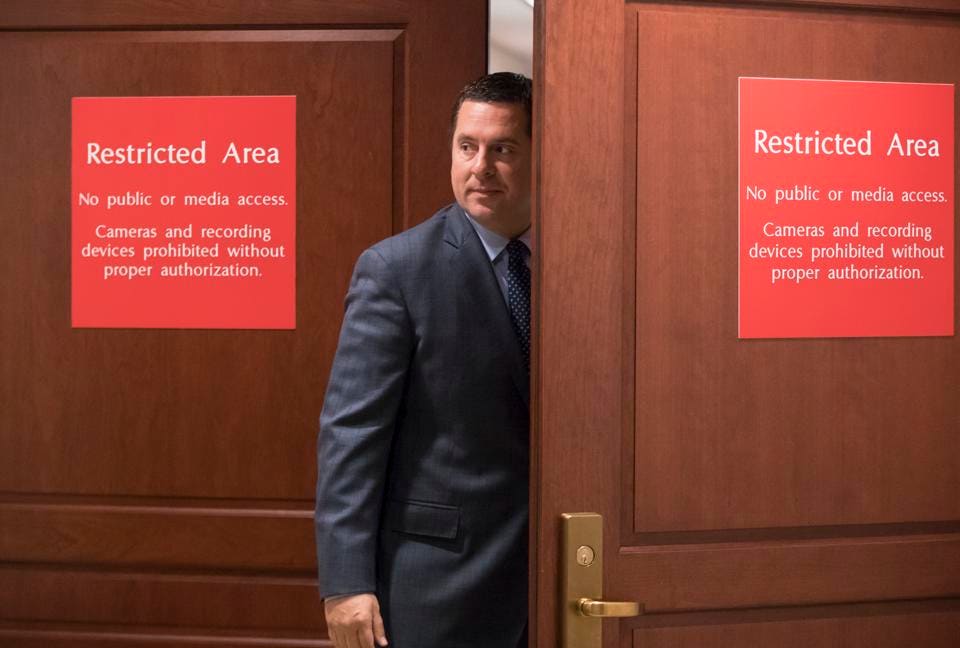 … this episode is the worst abuse of political power in American history related to elections. Watergate is nothing by comparison. That involved people not employed by the government.  Later it involved a cover-up in which Nixon participated. Watergate did not involve the DOJ and the FBI — two institutions which must be non-partisans for this Republic of ours.

On Forbes, Thomas Del Beccaro has an Annotated Timeline of Biased FBI and DOJ Officials Breaking The Law And Trying To Decide The Election (thanks to Instapundit).


Below is a timeline of events – abbreviated though it is – that makes it rather plain that the FBI and DOJ were not investigating potential crimes objectively.

Indeed, they were committing crimes during the process in aid of their preferred outcomes.

Read the 27 points of the timeline, the following information we get from point 22:


All in all, Comey swore under oath that the Court should consider the [Christopher Steele] dossier credible evidence so that the FBI could spy on Trump campaign official Carter Page – even though Page had already left the campaign.  Given that it was known that Page already left the campaign, it could well be that Carter Page was the fall guy excuse to begin domestic spying on others.

Without question, Comey misled the FISA Court by submitting and vouching for the unverified dossier and pushing the Yahoo News story.  Those were not the only questionable acts, misrepresentations nor omissions of Comey.

The FBI and DOJ, at the time they made the original FISA application, also were aware of the following - ALL OF WHICH WAS HIDDEN FROM THE FISA COURT:

a) Hillary’s campaign and the DNC paid for the dossier - a fact which, if known, would give rise to judicial questions of potential evidentiary bias.

b) Christopher Steele tells a DOJ official Bruce Ohr that Steele was "desperate that Donald Trump not get elected and was passionate about him not being president." Another fact that, if known, would give rise to judicial questions of potential evidentiary bias.

c) The FBI was willing to pay Christopher Steele for more research but rescinded its offer when the FBI found out Steele had briefed reporters on the content of his dossier – a violation of FBI rules. Any Judge or jury would want to know if someone offering evidence otherwise was breaking rules. It bears on whether the witness can be trusted.

d) Carter Page was not considered by the Russians as a credible businessmen and/or figure. Many believe Carter Page was an insignificant player. Again, this raises the question of whether surveillance of him was really an attempt to get at others.

e) A DOJ official’s wife was working for the outfit commissioning the dossier. Another potentially biased individual.

The most incredible point may be the last one, which reads thus:


27.  90 days renewals. Three times thereafter, the FBI and the DOJ reapplied for a FISA warrant and never apprised the Court of their prior misrepresentations and/or omissions. The existing Deputy Attorney General Rod Rosenstein, who currently oversees the Mueller investigation, was one of the officials who made a FISA warrant reapplication. It has also been said that Rosenstein has threatened House Members with legal proceedings if they continue to push oversight of this matter.

So what conclusions are to be drawn in all of this? asks Thomas Del Beccaro.


1.  Obviously, the Obama Administration DOJ officials were never going to charge Hillary Clinton with a crime related to the emails. To make that come true, their officials went easy on Hillary (as the Strzok/Page texts expressly suggest should be done).  They altered procedure, they granted multiple immunity deals, they allowed for the destruction of evidence, they gave her an easy interview, they delayed the review of documents, they altered the characterization of Hillary’s offense from “grossly negligent” to “extremely careless” to exonerate her from liability, and more. Their conduct amount to obstruction of justice – a crime.

2.  The race between Hillary and Trump pushed the FBI/DOJ to alter the Hillary email investigation timeline for election purposes. They weren’t following the evidence, they were keeping to a deadline. They pushed to end the investigation and to exonerate her so that she would not be burdened with the investigation as the race moved into the Fall.

Yes, it is true that Comey made a terrible (if not illegal) decision to publicly announce reopening the email investigation days before the election.  In truth, however, because it would implicate Obama, no charges were ever going to be brought.

3.  It is obvious that the FBI/DOJ officials hastened the end of the Hillary email investigation and then immediately began an investigation of Donald Trump. The timing of the July 5, 2016 Comey exoneration speech and the late July counter intelligence investigation related to a tangential Trump advisor should not be viewed as just a coincidence.  It was, as Strzok said, an insurance policy against the election of Trump.

4.  Does Comey’s original draft and his announcements related to Hillary not demonstrate he was not biased against her? Maybe. The fact that Comey made inconsistent and stupid decisions does not mean the FBI and the DOJ weren’t giving Hillary a free pass.  Also, there is no doubt, that Comey stole documents from the FBI and illegally leaked such documents.  Those are crimes. Beyond that . . .

5.  FBI/DOJ officials knowingly concealed evidence and misled the FISA Court. They, including Comey, knew the law.  They are senior law enforcement officials. They knew they had been turned down before and therefore had to bring more to the table.

So what did they bring?  The dossier.  The unverified dossier.  They asserted to the Court, however, that it was credible.

They also omitted information that likely would have resulted in the Court denying the application.  It was October of 2016, however, and they wanted information right then and there.  After all, it was less than a month before the election.

6.  Based on those lies in the FISA applications, all the evidence that was gathered as the fruit of that warrant, unless it can be shown the evidence was clearly not gathered from that warrant, could be ruled inadmissible in any criminal case. Look for Paul Manafort to make that argument.

7.  Without the FISA warrant, would there have been an Independent Counsel? We shall never know – but it appears rather unlikely.

8.  Mueller. He had to know of the facts above. Why hasn’t he blown the whistle on the bad cops?

9.  It is right to say that this episode is the worst abuse of political power in American history related to elections. Watergate is nothing by comparison. That involved people not employed by the government.  Later it involved a cover-up in which Nixon participated.

Watergate did not involve the DOJ and the FBI – two institutions which must be non-partisans for this Republic of ours.

This case does involve the FBI and DOJ.  It also is foolish not to assume that Loretta Lynch and President Obama were ignorant of the goings on - if not involved in them.

Finally, the dishonest investigation of Hillary who committed actual crimes should not be acceptable. Nor should FBI or DOJ officials be allowed to alter events and Court proceedings for political purposes.

If we let this go, and people are not brought to justice, we will have forever damaged our Republic and the World’s view of us as a nation of laws.