A fantasy philosophy 2,000 years old: the belief one can discern how things really are by means of that inner light allowing one to deny actuality and proceed according to fantasy

A Hebrew prophet once asked the rhetorical question: “Can a leopard change his spots or the Ethiopian his skin?” Much later, another prophet asked, “Which of you by taking thought can add one cubit unto his stature?”

Fay Voshell goes back a couple of thousand of years (thanks to Instapundit) to explain the modern left.


The idea [of the prophets] was that there are certain realities that humans cannot change by a mere exercise of will.

Even the beasts instinctively accept how they are made. But the prophets’ common-sense observations about the unchanging nature of material realities has in our day been thrown aside in exchange for a fantasy philosophy that is akin to alchemists’ dream that if we only had secret means to do so, we could change lead into gold.

The fantasy philosophy that insists human will combined with spiritual power can defy and change material reality is called Gnosticism. Gnosticism is basically a pessimistic belief, as it tries to repudiate the existence of the whole universe, which is seen as irretrievably corrupt. Devotees of Gnosticism crave being free from the curse of all things material and believe they may be released from the curse of this wretched world by a secret, inner spiritual knowledge accessible only by themselves.

Even Christianity, which celebrates the material world as still good, though fallen, has through syncretic thinking been afflicted with the idea that the human spirit can by a sheer act of will overcome material reality, including the built in limitations of the human body and its sensual desires.

… Eating only the Host [the daily Eucharistic wafer] was seen as an exercise in achieving a pure spirituality that eliminated or at least utterly transcended the fleshly appetites, including sensuality. Spirit over matter was to prevail. By an act of will, one could overcome the reality of the sinful body.

The ancient Gnostic idea that one can by an act of will repudiate material realities has been resurrected time and again, resurfacing to be part of the current liberal political ethos.

Such is the state of affairs in Gnostic leftist political thought that it is believed quite possible to declare one’s self by fiat to be sex opposite to the one you were born as. If you are a man who feels like a woman, all you have to do is to declare yourself to be a woman.

This denial of a reality that is foundational to all civilizations is being made into law in Europe and in America, with the deleterious consequences still to be completely realized.

As George Weigel notes in his recent National Affairs article entitled “Reality and Public Policy,” in 2007, Spain's Zapatero government enacted legislation allowing men to change themselves into women and women into men by simply declaring one’s newly recognized sex, with or without surgical alterations. The new man or woman could then be issued new national identity card reflecting the gender of choice. Weigel concludes, “It is hard to imagine a more explicit expression of personal willfulness overpowering natural givenness.”

In other words, reality be damned. The purely good will and spirit within the individual is to prevail over common sense and human tradition since time immemorial. I may look like a woman and actually be a biological woman, but if I decide I’m a man, who are you to question my inner light? Who are you to resist my truth about myself? As millions of American children are taught every day, “You can be anything you choose to be.”


“[…]within a very short span of time, less than two generations, two aspects of the human condition that had been understood for millennia to be the very quintessence of givenness -- maleness and femaleness -- were no longer taken to be given at all. "Male" and "female" were not The Way Things Are. "Male" and "female" were "cultural constructs," usually manipulated by those in power for purposes of domination (Gnosticism thus adding a soupçon of Marxism to its ideology of plasticity).

“Gnostic anthropology -- the Gnostic view of the human person and the human condition -- is the antithesis of the Biblical view of men and women and their possibilities, which has long been one of the foundation stones of the Western civilizational project.”

Weigel points out that the new Gnosticism engendered by the sexual revolution not only ignores and warps the differences between men and women, but it also warps the rest of politics:


“[…]if people are prepared to insist as a matter of fundamental civil rights) the unreal claim that marriage can encompass two men or two women, why should those same people not believe that America can continue to run trillion-dollar deficits with impunity? Or that the centralization and vast regulatory apparatus to be created by Obamacare will not inevitably lead to the rationing of end-of-life care? Or that the federal budget deficit has primarily to do with the wealthy not paying ‘their fair share’ ”?

Seeing matters through the lens of Gnosticism’s sure inner light gives infinite plasticity to foreign affairs, as the belief one can discern how things really are by means of that inner light means one can deny actuality and proceed according to fantasy. For instance, liberal Gnostics can see behind the spittle-inducing statements of jihadists and know the Islamists are actually protesting poverty rather than really meaning to kill Jews and eliminate the nation of Israel. Because of their secret knowledge about the true conditions of humanity and the remedies for ill, Gnostics can see behind Iranians’ leaders desire to get rid of the “Great Satan” in order to issue in the reign of the 12th imam and see that at heart, radical Muslims truly believe in peace for all mankind.

Liberal Gnostics also can see clearly that the mass murders of American citizens by lone gunmen are really the fault of the NRA’s advocacy of gun ownership. They discern with inner clarity that the solution to violence is not only to disarm the American populace but to ensure none of our kids even so much as point a finger at anyone and say, “Bang; bang. You’re dead.” In brief, if your child doesn’t even think violent thoughts, evil will never happen.

Leftist Gnostics can also discern that anything bad that happens in the Obama administration is not really his fault. The bad seeds now producing bitter fruit were planted during the administration of G.W. Bush. The illogical conclusion: Nothing is ever Obama’s responsibility, much less his fault.

The fact some guy just murdered his wife and should be punished is trumped by Gnostic prophetic musings about the criminal’s past and pleasant dreams about rehabilitating him and his society in the future. The victim whose blood cries out for justice in the here and now is not as important as political augury extending back into the past to discern how things got this way as well as looking forward into the future to determine how things will change for the better. The present moment, the present reality is entirely insignificant. The murder is significant only for what it represents. It is symbolic, not real.

In sum, for the Gnostic Left, the reality of bad or even criminal behavior is trumped by the idea of how things were and how they ought to be, not how they are in the here and now.

But the greatest Gnostic denial of all is the denial of the almost limitless capacity for evil that lies within the human heart. In laying the blame on material reality as being inherently corrupt and in dreaming of fantastical utopias of the future, Gnostics fail to see that their mystical inner word of discernment can be as corrupted as anything actually occurring within the material world. That clear, spiritual inner voice is not necessarily pure as driven snow. It, too, has unpleasant realities and odious capacities. A soul can smell worse than the body.


“Reality may be, and often is, unpleasant. But policies rooted in a failure to grasp reality are dangerous, and too often deadly. […] A culture convinced that everything is malleable and that there are no givens in personal or public life is not a culture likely to sustain serious debates about serious public-policy options.”

… Ultimately, Gnosticism in all its forms, including current liberal political thought, owes its basis to the Devil’s lie to all humans: “You shall be as gods.” The lure of having infallible inner knowledge of how things really are combined with the mystical misconception that the will to power is all that matters, ignores not only material reality, but the reality of the fact that both good and evil speak to the human heart.

In the end, Gnostics’ belief that the still, small voice within can trump reality puts politics, national and international, on the road to perdition. 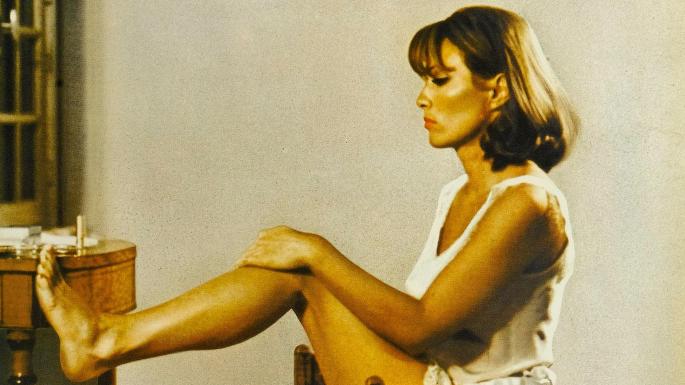 The Times has an obituary for the French actress renowned for playing adulterous bourgeois women and winning a Bafta for her role as the cook in Babette's Feast.
Posted by Erik at 10:11 No comments: