The decision, announced by the British Medical Association, is intended to reduce overcrowding in consulting rooms and ease the burden of the country’s doctors. The BMA council’s chairman, J.R. Nicholson-Lailey, said that the BMA did not want these payments collected by the doctor. Mr. Nicholson-Lailey’s statement indicated that the payments might be used to keep persons with frivolous complaints from monopolizing the doctor’s time.

Mingling With the Crowds 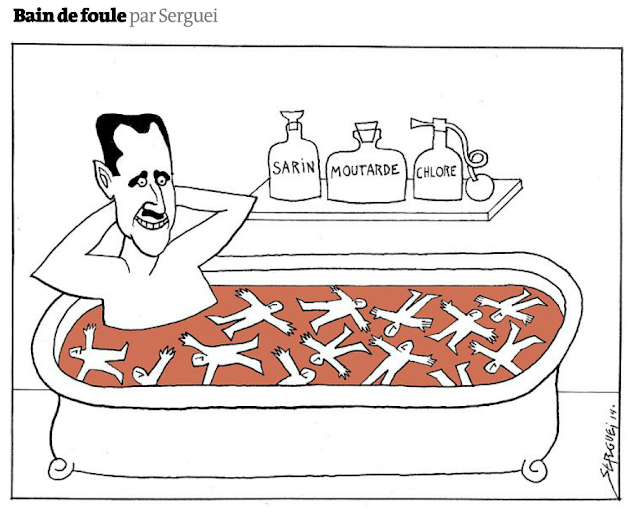 Serguei's take on the Assad bathtub in Syria — replete with sarin, mustard, and chlorine…
Posted by Erik at 10:40

“Everything — everything — stems from Algeria”: France's unavowed forgetting of the Algerian war

Benjamin Stora arrived in Paris in the summer of 1962, a boy exile swaddled in as many layers of clothing as his parents could fit on his little body


He came amid a flood of refugees, one million French colonists, Arabs and Jews fleeing the murderous tumult of revolutionary Algeria.


His family, suddenly destitute, brought with them as much of their homeland as they could. But Mr. Stora learned quickly not to speak of Algeria, he said. To do so would make him a reminder of France’s national disgrace, he feared, an emblem of the brutal, failed war to keep Algeria under the yoke of the receding French empire.


He trundled off to school and, with a sense of isolation and resentment that he was then too young to understand, set about forgetting.

France did the same. The forgetting of the Algerian war, a campaign begun in 1954 that left at least 400,000 Algerians and 35,000 French dead, in fact began well before the fighting ended in 1962. The conflict was inglorious in both aim and execution — the French made routine use of torture, for instance — and censors hid much of it from the populace, seizing newspapers, books and films deemed dangerous to national morale.

Only in 1999 did France officially recognize the fighting as a war at all, and only since then has the conflict entered school textbooks here. Though more than two million French soldiers were sent to fight, memorials are scant.


Mr. Stora, 63, has made a life of remembering, at first despite himself, later by conviction. A prolific historian, he is perhaps France’s foremost chronicler of the Algerian war, of its unavowed forgetting, and of the ways in which it continues to shape modern France: in the country’s discomfort over immigration and Islam, in its nostalgia for a more triumphal past, in its confusion over national identity. If France has begun a more honest reckoning with its colonial era, it is due in no small part to Mr. Stora, to his three dozen books and films and to his dogged belief that Algeria remains a toxic force here.

at the time, in the 1970s, open discussion of collaboration during the Nazi occupation was only just beginning. Now a pleasantly rumpled man with a round belly and a grave brow, he has helped train a generation of researchers. His best-known work, “Gangrene and Forgetting,” published in 1991, was among the first books to address the unspoken memory of the war. “Denial” was “eating away like a cancer” at France, he wrote.

… The “pieds noirs,” the French inhabitants of colonial Algeria, were met with disdain in mainland France. Many were poor to start, and had fled Algeria with even less. Their resentment toward Algerians, but also toward the French government, which they felt had betrayed them, is deep even now.

SO, too, is that of the Harkis, Algerians who fought for the French. Perhaps 80,000 Harkis and family members fled to France in 1962, by Mr. Stora’s estimation, only to be held for years in internment camps. Many more were left behind; thousands, if not tens of thousands, were slaughtered as “traitors.”

Meanwhile, the French government excused itself and its soldiers of any possible wrongdoing, with a succession of amnesties.

“The French had to forget in order to live,” Mr. Stora said.

It is certainly easier to criticize Americans for conflicts involving America, like the Iraq war, when you know (or when you sense) that the wars that your own nation was involved in will not be a subject for discussion until 40-50 years down the road…

(This also applies to the wars your own nation was not involved in, like Sweden, the "neutral" country which lashed out at the American "fascists" during the Vietnam War era, and whose more or less passive collaboration with Hitler during the 1940s — the export of iron ore to the Nazis, allowing German troops through Sweden to the Finnish and Russian front — was not revealed, or talked about, until much later…)
Posted by Erik at 09:16 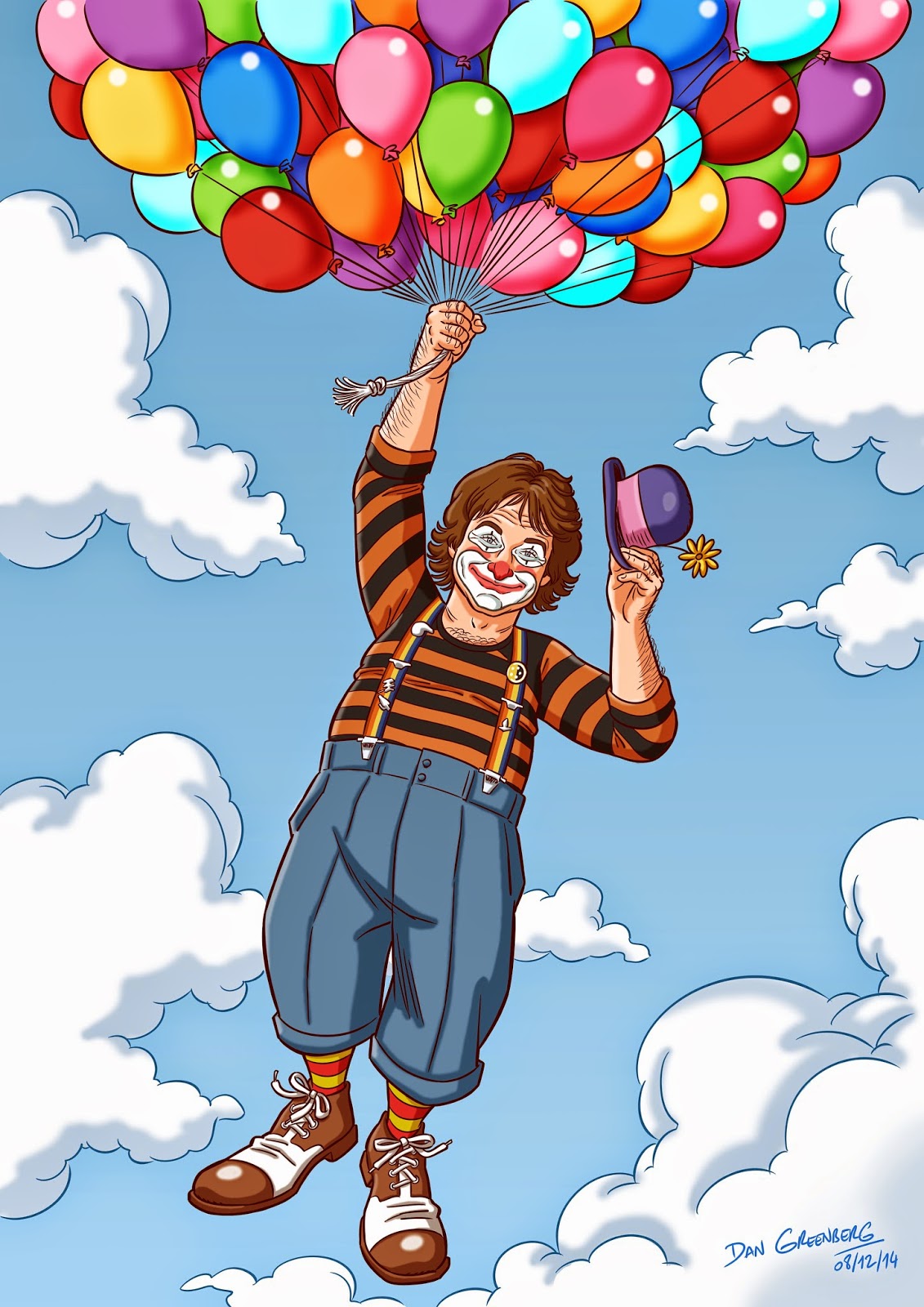 Art by Dan Greenberg
Posted by Erik at 13:59

France's daily of reference came under fire in February 2003, writes Raphaëlle Bacqué in (and about) Le Monde, when a book on "the hidden side of Le Monde" was published, La Face cachée du “Monde”.

Being either for us or against us, of course, was what all Frenchmen deplored as gravely as possible when such words were uttered by clueless Americans like George W Bush (whose attack on Iraq was to start only weeks later).

As it happens, the publication of the book will lead to a poisonous atmosphere at the newspaper, to charges of treason, to censorship, and to the ombudsman's admission that at the editorial offices, La Face cachée du “Monde” has become a more compelling subject than the Iraq crisis…

The QMI Agency (merci à Carine) reports that the


pro-Palestinian British MP has declared a northern city in England an "Israel-free zone."

During a talk in Leeds, George Galloway said Israeli tourists are not welcome in Bradford. Both cities are about 325 km north of London.

Judith Perrignon has an article in Le Magazine du Monde on a former editor of the newspaper of reference.

Wanting to examine "the impact on people's lives of chance opportunities, lucky breaks, and being in the right place at the right time", a decade ago, The Daily Telegraph's Richard Wiseman set out to investigate luck.


After many experiments, I believe that I now understand why some people are luckier than others and that it is possible to become luckier.


For fun, I placed a second large message halfway through the newspaper: "Stop counting. Tell the experimenter you have seen this and win £250." Again, the unlucky people missed the opportunity because they were still too busy looking for photographs.

Personality tests revealed that unlucky people are generally much more tense than lucky people, and research has shown that anxiety disrupts people's ability to notice the unexpected. In one experiment, people were asked to watch a moving dot in the centre of a computer screen. Without warning, large dots would occasionally be flashed at the edges of the screen. Nearly all participants noticed these large dots.

… The harder [the anxious people] looked, the less they saw.

And so it is with luck - unlucky people miss chance opportunities because they are too focused on looking for something else. They go to parties intent on finding their perfect partner and so miss opportunities to make good friends. They look through newspapers determined to find certain types of job advertisements and as a result miss other types of jobs. Lucky people are more relaxed and open, and therefore see what is there rather than just what they are looking for.

My research revealed that lucky people generate good fortune via four basic principles. They are skilled at creating and noticing chance opportunities, make lucky decisions by listening to their intuition, create self-fulfilling prophesies via positive expectations, and adopt a resilient attitude that transforms bad luck into good.

… In the wake of these studies, I think there are three easy techniques that can help to maximise good fortune: