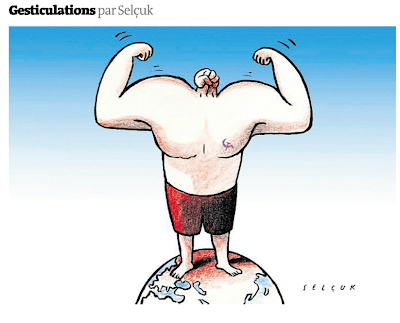 Remnants of Saddam’s Toxic Arsenal: What the MSM Has Been Keeping Secret for Years

By late 2003, even the Bush White House’s staunchest defenders were starting to give up on the idea that there were weapons of mass destruction in Iraq

An initial glance at the WikiLeaks war logs doesn’t reveal evidence of some massive WMD program by the Saddam Hussein regime — the Bush administration’s most (in)famous rationale for invading Iraq. But chemical weapons, especially, did not vanish from the Iraqi battlefield. Remnants of Saddam’s toxic arsenal, largely destroyed after the Gulf War, remained. Jihadists, insurgents and foreign (possibly Iranian) agitators turned to these stockpiles during the Iraq conflict — and may have brewed up their own deadly agents.

… even late in the war, WMDs were still being unearthed. In the summer of 2008, according to one WikiLeaked report, American troops found at least 10 rounds that tested positive for chemical agents. “These rounds were most likely left over from the [Saddam]-era regime. Based on location, these rounds may be an AQI [Al Qaeda in Iraq] cache. However, the rounds were all total disrepair and did not appear to have been moved for a long time.”

A small group — mostly of the political right — has long maintained that there was more evidence of a major and modern WMD program than the American people were led to believe. A few Congressmen and Senators gravitated to the idea, but it was largely dismissed as conspiratorial hooey.

The WMD diehards will likely find some comfort in these newly-WikiLeaked documents. Skeptics will note that these relatively small WMD stockpiles were hardly the kind of grave danger that the Bush administration presented in the run-up to the war. …

The main conclusion to be taken from this, however, is neither the first note nor the second one. It is that the Mainstream media deliberately ignored any discussion or even the slightest consideration of the findings to hammer home their (self-serving) obstruction to the White House when it was the home of a Republican of George W Bush's bent…
Posted by Erik at 22:24

The Left is throwing a tantrum over the Hobby Lobby case precisely because they intend to further curtail religious liberty; Religious liberty is a huge problem for people who recognize no higher power than the state

The wailing and gnashing of teeth from the likes of NARAL, NOW, and the Daily Kos is more of the same hysterical overreaction they have to everything. They seem worried that if we allow any religious exemption to any law, no matter how small, then everyone will cite “sincerely held religious belief” whenever the law inconveniences them. Anarchy will then ensue and the whole world will end.

Of course, Hobby Lobby did not ask for the law to be waived for them. The court sided with them because the law—the Religious Freedom Restoration Act or RFRA—is on their side. I would argue that the First Amendment is too, though the court didn’t speak to that.

Ryan Grim of The Huffington Post penned a piece in which he expressed the slippery slope argument fairly well. “8 Other Laws That Could be Ignored Now That Christians Get to Pick and Choose” is a hyperbolic harangue riddled with errors but the basic gist is that everything is now in jeopardy because Christians, and only Christians, can do whatever they want.

Among Grim’s list of laws that could be ignored are bans on hemp and LSD because some people use them religiously. “While we’re at it, all drug laws rub up against religious practice,” Grim argues. “Sorry officer, this is our church.”

… That’s where liberals stand on the religious freedom issue. Before they can get behind it, they apply a two-prong test. First—do they like you? If the answer is no, then you’re a bigot. Sorry, but bigots have no rights. Second—is their agenda in any way impeded? If the answer is yes, then freedom of religion does not apply.

I don’t remember any liberals howling that religious exemptions would lead to privileged groups picking and choosing which laws they would follow back when a Democrat-controlled Congress passed, and President Clinton signed, the RFRA. They should have argued that everyone must follow all laws, no exceptions. If we allow a religious exemption for American Indians and their holy stash, next thing you know Christians might think that they have rights too! Then we won’t be able to force them to pay for someone else’s abortifacients. It’s a slippery slope. Let’s not go there.

…The Left is throwing a tantrum over the Hobby Lobby case precisely because they intend to further curtail religious liberty. All this free exercise stuff terrifies them. If people can simply say “It’s my religion” then liberals won’t be able to force military chaplains to perform same-sex marriages and people will be free to teach their children what they want. Religious liberty is a huge problem for people who recognize no higher power than the state.