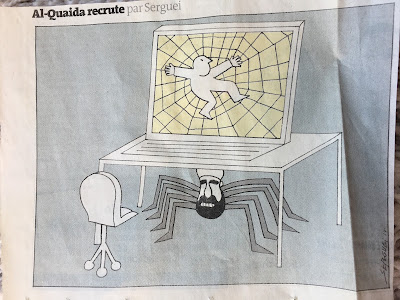 Le Monde's Serguei on the ISIS spider and its how it nets recruits in its (on the) web…
Posted by Erik at 12:11 No comments:

House minority leader Nancy Pelosi has been the loudest voice against the administration of Donald Trump. The “deflector in chief,” as she calls the president, has “done nothing,” and in a March 5 CNN interview Pelosi doubled down on the Democrats’ default conspiracy theory.

“What do the Russians have on Donald Trump?” she said.  “That’s the truth we want to know.”


As Pelosi mounts this surge, the old-line establishment media have shown little if any interest in Pelosi’s own background, particularly as it relates to Russia, the USSR, and the American labor movement.

“Harry Bridges was arguably the most significant labor leader of the twentieth century,” Pelosi wrote in the Congressional Record in 2001, on the 100th anniversary of Bridges birth. Bridges was “beloved by the workers of this nation, and recognized as one of the most important labor leaders in the world” and his International Longshoremen’s and Warehousemen's Union was “the most progressive union of the time.”

At the time Pelosi’s tribute drew little if any news coverage, but in 2007, when she was calling for unconditional withdrawal from Iraq, it came to the attention of Joshua Muravchik. Then with the American Enterprise Institute, he had been a speaker at the Second Thoughts Conference David Horowitz and Peter Collier staged in 1987. As a former chairman of the Young People’s Socialist League, Muravchik knew his onions on Harry Bridges.

“Pelosi’s Favorite Stalinist,” ran the headline on his June 25, 2007 piece in the Weekly Standard. True to form, Harry Bridges was “an Australian immigrant and devoted Communist” both the Roosevelt and Truman administrations tried to deport because he had lied about his Communist affiliation in his immigration papers.

“So loyal was Bridges to Moscow that during the period of the Stalin-Hitler pact, he opposed the (1940) reelection of labor hero FDR, because Roosevelt was aligning the United States with Britain against Germany, and the ILWU printed antiwar pamphlets proclaiming ‘The Yanks Are NOT Coming.’ As soon as Hitler’s forces invaded the Soviet Union, Bridges did a 180-degree about-face on the war.”

Bridges and his union “took transparently pro-Communist stances” while denying Communist affiliation. “Only after the fall of the USSR, and the opening of Soviet archives,” Muravchik wrote, “did the truth emerge that Bridges had been not merely in the party but a member of the Central Committee of the Communist Party USA, a position for which the documents show he was directly approved by the Kremlin.”

A full nine years after this revelation, Pelosi delivered her worshipful tribute to the Stalinist labor boss. As Muravchik noted, she visited ILWU headquarters and praised “another prominent Bay Area Stalin fan, Vivian Hallinan, whose husband was Bridges’ lawyer and the 1952 candidate for president of the Communist-front Progressive party.” In Pelosi’s view, “Vivian was devoted intellectually and passionately to many causes, well before they became popularly embraced.”

… Pelosi’s praise of Bridges, Muravchik wrote, was not to say that Pelosi was ever a Communist. It did show “Pelosi’s wretched record in judging who are history’s good guys and who are its bad.” And as she ran off to meet the likes of Syrian strongman Bashar al-Assad, “we should be mindful that some of what she knows about political values was learned at the feet of people who believed fervently that the great enemy of mankind was none other than America itself.”

That’s what the leaders of Iran believe but Nancy Pelosi is a strong supporter of the Iran deal that many believe will speed Islamic regime’s acquisition of nuclear weapons. In similar style, when the 44th president caved to Russian complaints and canceled missile defense in Europe, Pelosi called it a “brilliant” move.

Likewise, Secretary of State Hillary Clinton’s famous re-set gave the Russians virtually everything they wanted, including the most highly intrusive inspection program the United States had ever accepted. “We want to ensure that every question that the Russian military or Russian government asks is answered,” Clinton said after meeting with Russian foreign minister Sergey Lavrov.

The Best British Political Insults, From Churchill to Corbyn