1619: It takes an absurdly blind fanaticism to insist that today’s free and prosperous America is rotten and institutionally oppressive 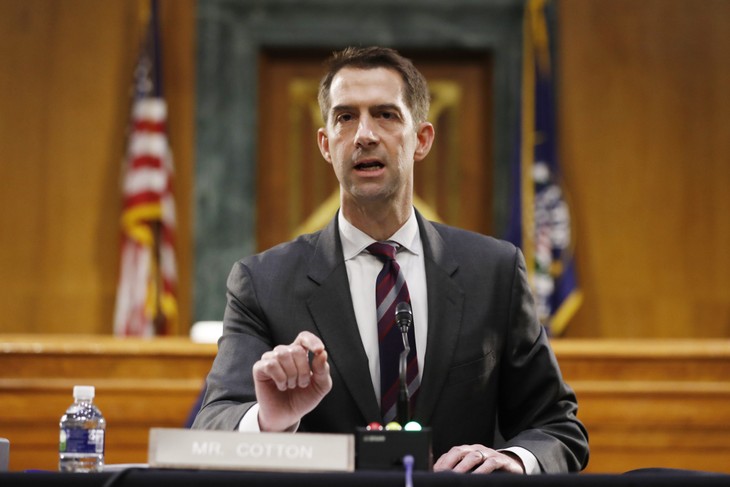 On Thursday night, Sen. Tom Cotton (R-Ark.) eviscerated the terrifying “cancel culture” that seeks to silence anyone who dares disagree with leftist dogma

writes Tyler O'Neil at PJ Media. The writer of Making Hate Pay (The Corruption of the Southern Poverty Law Center) did not specifically mention the 1619 Project, but that issue is part and parcel to the left's attack on America and on the rewriting of history…


Cancel culture animates the vandalism against statues — including those of black volunteer troops for the Union fighting against slavery — along with the abortion of television shows and the firing of people.

Cotton briefly listed many of the recent victims of cancel culture in the wake of the George Floyd riots … Tom Cotton did not need to mention former New York Times op-ed editor James Bennet, who resigned amid backlash for publishing Cotton’s op-ed.

… “What is the logical conclusion? What is the end of the cancel culture? I will tell you what it is. It is right here in this city, Washington, the District of Columbia. That’s where it will end if we don’t put an end to the madness now,” Cotton warned.

“Up the Hill is the Washington National Cathedral where so many times we have gathered as a nation over the years to mourn our great leaders, to pray for God’s protection and deliverance in moments of national strife and struggle,” Cotton continued. “Are we going to rename the Washington National Cathedral the ‘Temple of Reason’ as the Jacobins did to Notre Dame during the French Revolution?”

“And what are we going to call this city? Can’t call it Washington. Can’t call it Columbia,” he said, rejecting “Columbia” because it is a version of Christopher Columbus’s name. “Gotta come up with new names, all around.”

“I will say this, the cancel culture, whether in its Maoist or its Jacobin forms, ultimately is animated by a single idea, that America, at its core, is fundamentally irredeemable and wicked,” Cotton concluded. “I reject that claim fully, wholeheartedly. America is a great and noble nation, the noblest nation in the history of mankind, that has struggled throughout our history, imperfectly but ceaselessly, to live up to our founding creed that all men are created equal. The single greatest defense against tyranny, against racism, against oppression. [Those are] the stakes of this debate.”

Cotton is correct. The cancel culture — like its more virulent form in the Southern Poverty Law Center’s “hate group” defamation — is about control over the mind, quashing intellectual dissent from The Narrative. That Narrative is that America is fundamentally oppressive — racist, sexist, homophobic, transphobic, Islamophobic, and all kinds of bigoted for which words do not yet exist — because evil domineering white men invented it.

Nevermind that those white men made universal human equality the central truth on which the nation stood, so much so that the logic of that freedom and equality forced the abolition of slavery and women’s suffrage. Nevermind that America’s free markets have helped give birth to an entirely new form of wealth unimaginable just two centuries past. Nevermind that the supposedly “oppressed” people are citizens with the right to vote, petition their government, and speak their minds to a degree essentially unprecedented in human history.

It takes an absurdly blind fanaticism to insist that today’s extremely free and prosperous America is institutionally oppressive, bent on holding back its own citizens. To a limited extent, the administrative state is frustrating America’s entrepreneurial spirit, but not in a way that discriminates against people based on their race, sex, or identity. Those who violate the law face repercussions, and many of the laws are in need of reform, but this does not prove that America is rotten in the way the leftist Narrative suggests.

The philosopher Jean-Jacques Rousseau once warned that the French philosophes aimed to take over the climate of opinion and force their views on society.

… Something like this is happening in America today, and it is terrifying. I have long followed the way the SPLC silences mainstream conservative and Christian opinion by branding its political opponents “hate groups,” associating them with America’s most notorious hate group, the Ku Klux Klan. The SPLC has served as the tip of the cancel culture spear, but it is far from alone. Antifa mobs have beheaded statues and vandalized public monuments across the country, and the cancel culture is coming for dissenters in various quarters of society.

Sen. Tom Cotton: "The cancel culture, whether in its Maoist or its Jacobin forms, ultimately is animated by a single idea -- that America is at its core fundamentally irredeemable and wicked." pic.twitter.com/JXN9YOBj10
— The Hill (@thehill) June 12, 2020

• "Deeply Ashamed" of the… New York Times (!), An Oblivious Founder of the Error-Ridden 1619 Project Uses Words that Have to Be Seen to Be Believed ("We as a News Organization Should Not Be Running Something That Is Offering Misinformation to the Public, Unchecked")

THE REVOLUTION OF THE 1770s