Fake But Accurate: The People Behind the NYT's 1619 Project Make a "Small" Clarification, But Only Begrudgingly and Half-Heartedly, Because Said Mistake Actually Undermines The 1619 Project's Entire Premise

At last, notes PJ Media's Bryan Preston, the New York Times admits its 1619 project was wrong (thanks to Ed Driscoll). But he points out some huge caveats, as do the World Socialists' Tom Mackinay and the Washington Examiner's Becket Adams.

In August 2019, The New York Times launched a project it called the 1619 Project. Its aim was to locate the founding of America to that year, 1619.

Because 1619 was the year the first slave ships arrived in the New World.

The Times explicitly sought to diminish America’s actual founding in 1776 by changing the focus from 1776 to 1619.

Because in 1776, the American revolutionaries laid out their “Why?” in the Declaration of Independence as they commenced the revolution to throw off the yoke of the British monarchy. The Times explicitly set out to re-write America’s answer to its central purpose. The Times set out to make liars of  America's founders.

The 1619 Project sought to re-write the American story. We would no longer be a nation built to protect the inalienable rights of all, as the Declaration states, but would instead become a nation forged specifically to enslave some. Who would, who could, be proud to be an American if our nation was founded specifically to protect and project the abomination of slavery? What would future Americans think, and do, if the Times' version of history stands?

The Times launched its project, and historians criticized it immediately. Yet the Times persisted, assailing its critics as its 1619 Project was adopted and used by public schools all over the nation.

That’s a question the NYT should now be forced to address, in public, as it should retract the entire Project. The paper has made a very significant change to its core 1619 claim. But only when it was forced to do so by its own fact-checker.

… The 1619 Project deliberately distorted history to serve current political purposes. It must be removed from all school curricula immediately since its core claim is false and defamatory.

In March 2020, notes the WSWS's Tom Mackinay, who interviewed several eminent historians about the 1619 project,


editor-in-chief of The New York Times Magazine Jake Silverstein announced that the 1619 Project would slightly amend its claim that the American Revolution was a racist endeavor undertaken to fight plans by the British Empire to end slavery.

… Silverstein’s “update” is nothing more than a cynical face-saving exercise necessitated by the revelation that the 1619 Project disregarded its own fact-checkers.

… This passage is still false. Protecting slavery could not have been a significant cause of the American Revolution, because, far from posing a threat to slavery, the British Empire controlled the slave trade and profited immensely from its commerce in people, as well as from its Caribbean plantations which remained loyal during the war for independence.

… The chain of events that led “toward” independence had already emerged with the Stamp Act Crisis of 1765, seven years before the Somerset ruling. “The British” did not seek to disrupt “American slavery” until Lord Dunmore’s proclamation of 1775—issued after the war of independence had begun—offered emancipation to slaves and indentured servants who took up arms against masters already in rebellion. The proclamation in fact explicitly preserved slavery among loyal British subjects, many of whom would live out their days under Dunmore in his final post as royal governor of the slave-rich Bahamas.

… In fact, it is the Times that has portrayed the American Revolution as an episode of “unanimity on the part of the colonists.” The 1619 Project presents the revolution as a simple conspiracy of white Founding Fathers waged to preserve slavery and create a sham democracy. The crowning achievements of this conspiracy, in Hannah-Jones’ telling, were the Declaration of Independence and the Constitution. On this question, Silverstein, Hannah-Jones and the historians they cite—Lerone Bennett, Gerald Horne, Woody Holton and David Waldstreicher—find themselves in alignment with John C. Calhoun and the other fire-eating defenders of slavery in the late antebellum. Though these historians draw a minus sign where fire-eaters drew a plus, all agree that the Declaration of Independence and the Constitution founded a slavocracy, not a bourgeois democracy.

… They disregard Frederick Douglass and other abolitionists who found in the Constitution the legal machinery for slavery’s ultimate destruction, and in the Declaration their “sacred scripture,” in the words of the great scholar of American slavery, the late David Brion Davis. Indeed, what is most glaring about the 1619 Project’s falsification is that it disregards the fact that the American Revolution ultimately led to the destruction of slavery. Just “four score and seven years later,” as Lincoln counted the years backwards from Gettysburg in 1863, an institution that had existed since the ancient world, and in the new world for 350 years, was destroyed.

Over at the Washington Examiner, Becket Adams does not let Leslie Harris get off lightly:


The head of the New York Times’s much-hyped 1619 Project concedes she got it wrong when she reported that “one of the primary reasons” the colonists revolted against England was to preserve the institution of slavery.

Journalist Nikole Hannah-Jones claims now that she meant to say “some of” the colonists fought to preserve slavery, not all of them.

The admission comes seven months after her faulty assertion first appeared in the New York Times’s package of essays arguing that America’s founding is defined by chattel slavery. The admission also comes after Hannah-Jones mocked and debased the many academics who directed mild and good-faith criticisms at her bogus statement.

And, yes, the New York Times reporter admitting she got it wrong comes only after a 1619 Project fact-checker published an op-ed revealing she explicitly advised the paper against printing the erroneous claim that the American Revolution was fought primarily to preserve slavery.

It cannot be stressed enough that Hannah-Jones’s since-corrected version of historical events was key to the entire project, the premise of which is that America was founded upon, built upon, and primarily formed by slavery.

But, hey, better late than never!

“Yesterday,” Hannah-Jones tweeted, “we made an important clarification to my #1619Project essay abt the colonists' motivations during the American Revolution. In attempting to summarize and streamline, journalists can sometimes lose important context and nuance. I did that here.”

In her original essay, she writes:

Conveniently left out of our founding mythology is the fact that one of the primary reasons the colonists decided to declare their independence from Britain was because they wanted to protect the institution of slavery.

Conveniently left out of our founding mythology is the fact that one of the primary reasons some of the colonists decided to declare their independence from Britain was because they wanted to protect the institution of slavery.

“The clarification is small — just two words — but important,” Hannah-Jones said on Twitter.

Along with not understanding the difference between “all” and “some,” it appears the New York Times reporter struggles also with the definition of the word “small.” Because amending her essay to say that some of the colonists revolted to preserve slavery, as opposed to asserting it was a driving force behind the entire revolt, is a hell of a lot more than a “small” clarification.

Indeed: to add that couple of words while retaining the premise — the phrase "Conveniently left out of our founding mythology" — has now become clearly fallacious, obviously deceitful, and plainly deceptive. Not to mention retaining Hannah-Jones's title with not a single change, "small" or otherwise, as Becket Adams points out below.


Then again, there is always the possibility that she is merely being disingenuous, which would not be surprising considering she has not conducted herself as a good-faith operator since the 1619 Project’s debut in August 2019.

In fact, there are a few things suggesting Hannah-Jones and the New York Times corrected the record not for a love of truth and accuracy but begrudgingly and half-heartedly. First, there is the lengthy editor’s note the paper published this week arguing her original error was, essentially, fake but accurate. There is also the fact that her article’s title still reads, “Our democracy’s founding ideals were false when they were written. Black Americans have fought to make them true.”

Also, there is the rather uncomfortable fact that the correction comes only after a 1619 Project fact-checker revealed last week that her recommendations were explicitly ignored by the editorial staff. The timing of the fact-checker's allegation and the New York Times's correction leaves one with the distinct impression that the paper’s admission of error was more or less forced. It cannot go on simply dismissing critics as ignorant, possibly closeted racists when one of those critics is its own fact-checker. At that point, they have to own up to the mistake. Hence the resentful, mealy-mouthed correction.

… Hannah-Jones deserves no praise for at long last correcting an error fundamental to her entire project, which had been brought to her attention almost seven months ago by multiple academics whose objections any intellectually serious, humble person would have heeded. 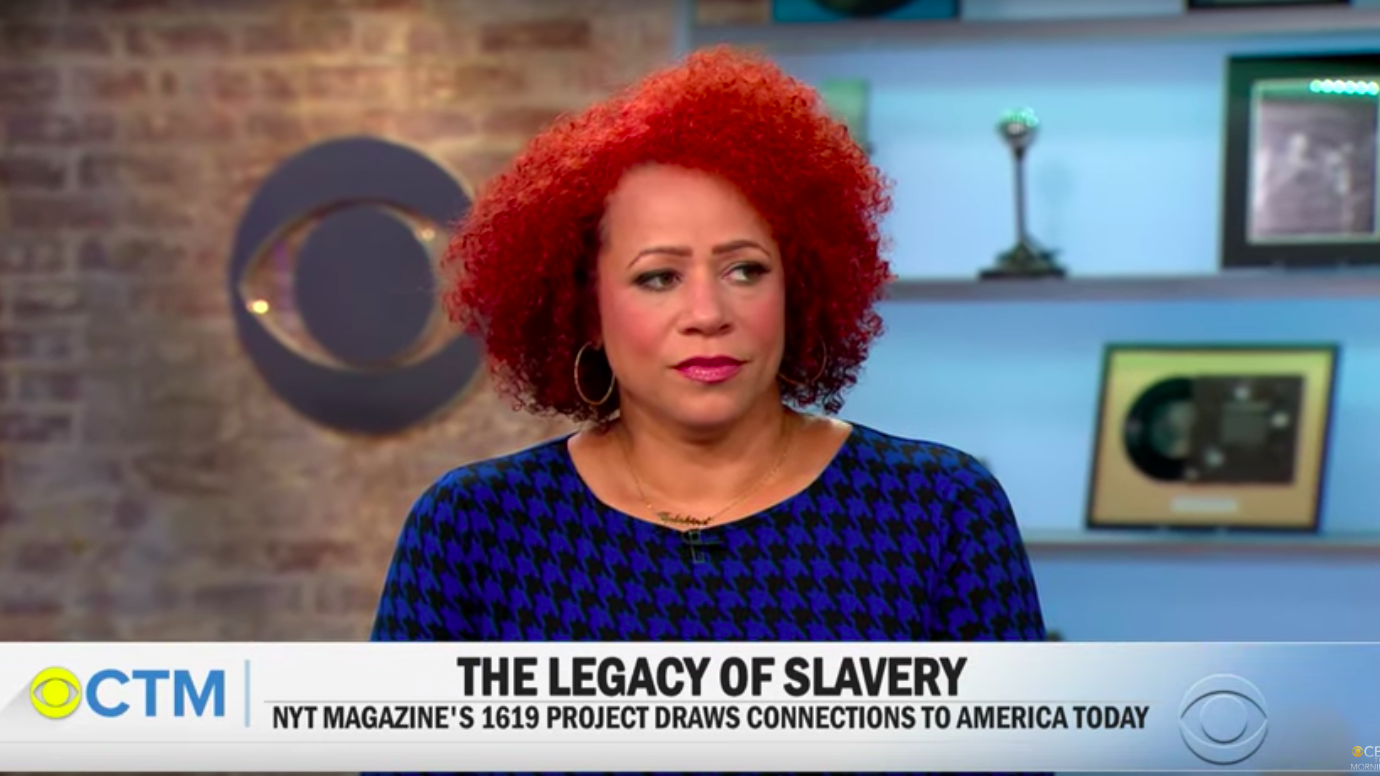 Related: 1619, Mao, & 9-11: History According to the NYT — Plus, a Remarkable Issue of National Geographic Reveals the Leftists' "Blame America First" Approach to History

• Clayborne Carson: Black Historian Kept in the Dark About 1619

• World Socialists: "the 1619 Project is a politically motivated falsification of history" by the New York Times, "the mouthpiece of the Democratic Party"

• Leslie Harris on 1619: Far from being fought to preserve slavery, the Revolutionary War became a primary disrupter of slavery in the North American Colonies

• Sean Wilentz on 1619: the movement in London to abolish the slave trade formed only in 1787, largely inspired by… American (!) antislavery opinion that had arisen in the 1760s and ’70s