When Trump Launches a Raid to Take Down a Terrorist Killer, Le Monde's Top Cartoonist Knows Who the True Villain Is 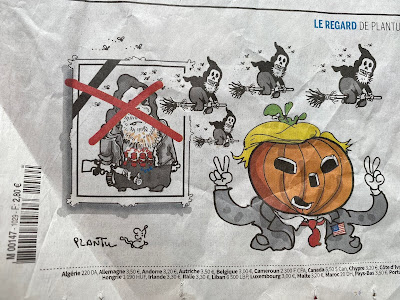 Flashback: Back in October, around Halloween, when Abu Bakr al-Baghdadi was killed in a U.S. special operations raid launched in Syria, Le Monde's Plantu penned a typical leftist cartoon showing the death of the (formerly elusive) leader of the Islamic State only leading to more terrorism, begetting witches with skulls.

Meanwhile the truly fiendish monster turns out to be — to no one's surprise — the American president who does not understand such obvious truths, i.e, Donald Trump with his head turned into a devilish Halloween pumpkin.
Posted by Erik at 19:24

The innaleckchools of Western Europe never forgave us for having made it impossible for them to live and work under their beloved Marxist-Leninist system. My thought for D-Day has been that had I a big enough stash of money, I'd help Americans bring back their WWII dead for reburial at home. And then, should Europe get in trouble again, I'd loudly scream for isolation.