The Confederate Flag: Another Brick in the Leftwing Activists' (Self-Serving) Demonization of America and Rewriting of History 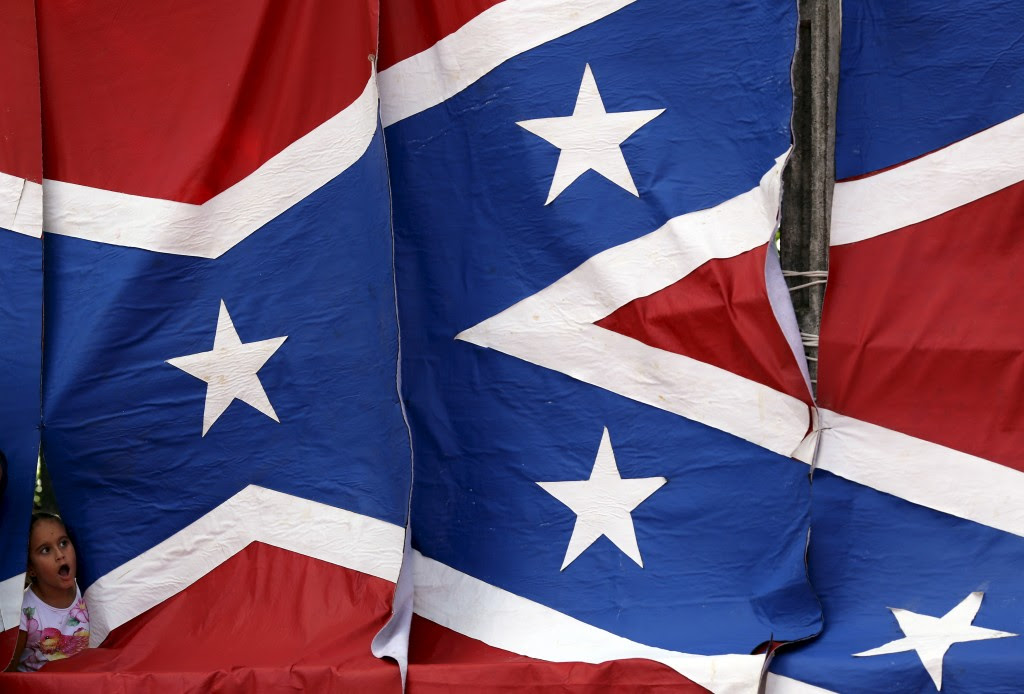 How correct were the Republicans to cave in on the subject of the removal of the Confederate flag?

You might be surprised to learn that the answer seems to be, not at all.

As always, the real motive of leftists — aka the drama queens — (foreign as well as American) is never principles (deeply-held or otherwise).

The real motive of left-wing activists is high dramatics. Along with a complete rewriting of American, and world, history to suit their egos.

What is at stake is the officialization of the culpability of the American republic. As well as the guilt of every citizen in the country, and indeed on the planet. All of them in need of the leftist activists' brand of healing, and their type of activist government.

Their human rights campaigns, for instance, have always been directed solely against the United States and/or the West.

The object of the attacks on the Confederate flag is nothing more than another brick in the rewriting of history so that the world's "last, best hope" (Lincoln, quoting Jefferson) becomes a reprehensible hell-hole with symbols to be likened to the Third Reich's Nazi swastika. (Quentin Tarantino called the South's slavery "Auschwitz", no less.) To be compared with the "genocide" of the Indians.

The Founding Fathers are to be rewritten as slaveholders, and Americans are to be deemed the equivalent, almost, of Nazi leaders and concentration camp kapos.

[See, four-five years after this post was written, the New York Times' 1619 project: 1619, Mao, & 9-11: History According to the NYT — Plus, a Remarkable Example of the Leftists' "Blame America First" Approach to History.]

This is what Barack Obama's common core is all about. That is what they mean to teach American kids. (One detail that, strangely, is always left out by the progressives is how the Southern states, both during the antebellum slavery days and later during the Jim Crow days, is how in all cases, those governments were firmly in the hands of the Democratic Party.)

The drama queens, and their hysterics, never deserve to be humored. Even partially.

They deserve to be punched back at. Twice as hard.

(Sarah Hoyt points to a Katie McHugh post on Breitbart that notes that while Amazon has taken down all merchandise bearing the Confederate flag, it continues to sell communist merchandise, "featuring the hammer and sickle, Joseph Stalin’s mustache, all things Che Guevara, Vladimir Lenin and other colorful revolutionaries".)

As I wrote in a lengthy post on, among other things, what hate speech in the 19th century sounded like,


… such (self-serving) musings — along with comparisons of the likes of Barack Obama to such illustrious predecessors as Abraham Lincoln and Ronald Reagan — [should be dismissed] as not the fruit of intellectual investigation, analysis, and arguments but—again—as part of its incessant litany of self-congratulation.

The drama queens' only object is a form of bragging:

The rewriting of history is something that, when another generation has passed (if that much!), should allow the leftists to do away with part or all of the Constitution with the object of getting all these smiley face activists to, with "the best of intentions", become a permanent feature of government, one that intervenes in all parts of the citizen's life.

As I wrote in a lengthy post on, among other things, American Slavery and Abolitionism in the Context of World History,


it is time that we own up to one basic fact:

Both started coming to an end (some places faster than others, but certainly all over the West) after the American Revolution and the advent of capitalism (which some of us prefer to call, simply, the free market), along with the industrial revolution in the land of their English-speaking cousins.

I.e., slavery started coming to and end in, and thanks to, the English-speaking nations.

And yet, the only slavery the nitpickers (American or foreign) condemn, revile, and wail and gnash their teeth over is slavery in the US of A. South American slavery of

… See, I am not defending slavery, but what the drama queens are doing, and getting conservatives to go along with, is perpetuating historical falsehoods, along with false comparisons, such as comparing the life of a slave (but only a black slave in the United States, you understand by now, not any others) to life in today's modern world (which truly would be nothing but atrocious) while ignoring the dreary poverty that life was for most people, black as well as white, in the West as throughout the rest of the world, up until the 18th and 19th centuries.

Related: You will be made to care… about the Confederate Battle Flag by (Damned Yankee) Jazz Shaw


Some years ago … our Red State colleague Erick Erickson penned a column on a completely different subject titled You Will Be Made to Care. Erick was talking about gay marriage, but what he described was the the ever present mode of operation for the modern American Left. It’s not enough to disagree with someone when there is a difference of opinion on social issues, government policy or even the color of the sky. It’s not even sufficient to shut down the conversation, as Guy and Mary Katharine so aptly identified in End of Discussion. Those who dissent must be forced to bend a knee and participate.

… in keeping with liberal theory, we must eliminate some piece of cloth that reminds them of their heritage, even if it has nothing to do with racism or slavery in their minds. It does to us! That requires a trigger warning, mister, and you didn’t provide us with a safe space!

And We Are The Perpetually And Righteously Offended, So You Shall Comply.

… Every Southerner I know today abhors the idea of slavery and would immediately call the police if they found out about anyone keeping human beings as slaves. But they are also proud of their heritage and the many things the South represents, and for many of them the Stars and Bars is emblematic of that sense of history and pride. So maybe you can crack the politically correct whip and tear down some flags. I say go to hell. Our brothers and sisters who dwell below the Mason-Dixon are Americans first and always, but they are Southern by the Grace of God.

Update: A lot of comments on an Instapundit post are talking about how Confederate symbols are being removed in stores all over America, while communist ones remain.  ("So it is okay to have slaves if you put them in gulags or concentration camps instead of on plantations? Perhaps after a trial to make it all legal like?", "Like the Professor said, 'Communists are just Nazis with better PR.' Maybe the Confederates, who were neither Nazis nor Communists, just needed PR as good as the Communists?")

Notice a key difference between communism and the South, however. In America, slaves were owned by private enterprise (the plantations); in Soviet Russia, laborers were enslaved by the state. Couldn't it be that all that we are witnessing is simply the left's good ol' hatred of capitalism (although slavery is abhorrent, needless to say, to the true free market) coupled with its love of the administrative state?
Posted by Erik at 03:33