Talk about rubbing it in

Stick it in and break it off! France's number 1 Elvis impersonator, Johnny Halliday, is announced by French TV to sing this evening at Sarkozy's victory celebration. Halliday tax-exiled himself to Switzerland and stated that he would consider returning to France if Sarkozy was elected. Hopefully, he'll sing Allumez le feu! and dedicate it to the French youth who are sure to be a bit grumpy this evening. 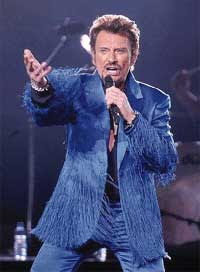 Four subway stations have been closed off and police reinforcements are being sent to Place de la Concode.
Posted by U*2 at 17:43