Sarkozy and His Message to America

Many commentators have been making a lot about, and praising (even if the praise has been somewhat reluctant at times), the declaration of friendship to the United States in Sarkozy's speech. Few people besides the Dissident Frogman and E-Nough were skeptical, both of them pointing out that the declaration was immediately followed by a but.

I have been asked whether the declaration of amitié received any applause. It did, including among the masses outside the UMF hall where I was standing, albeit his addendum — that friends should accept criticism (exclusively aimed at Americans accepting criticism from the French, and never the other way around) — received even more. (People were happy to hear that in the future — as ever — a lucid Frenchman could, and would, be around to give the clueless American "friends" a more nuanced view of world events.)

That was a cold shower. As E-Nough (who provided the 53-second link below) says, "plus ça change…"

And yet — attribute it to my optimistic Americanism — I am wont to be optimistic and hope and think that Sarko is trying to be "un rassembleur" and tend a hand to all citizens, including the anti-American racists — after all, Sarkozy is still in campaign mode, and he is so until mid-June which is the date for legislative elections.

Don't forget, either, French leaders' tendency of pulling the wool over the eyes of their audience and forging ahead with an unpopular line of action; the most famous example being Charles de Gaulle's heroic-sounding "Je vous ai compris" to the French ecstatic inhabitants of the Algerian colony (which in reality was and meant nothing and in no way prevented him from doing what he had planned all along, i.e., let Algeria recover her freedom).

Then, of course, back in 1995, I was optimistic when Chirac was elected, because now, I thought, finally, America had a friend in the Élysée palace…

Then again, Sarkozy is the son of a man forced to flee communist Hungary — part of a region that does not look kindly on considering the American superpower akin to the Soviet one. If someone of the caliber of Pierre Lellouche becomes foreign minister, then I will be convinced… Then again, I have my doubts on how long he would be able to hang onto his post…

(PS: In case you're wondering — as most French people are wont to do — what's wrong with telling friends your true thoughts, it's the fact that this common-sensical-sounding sentence is applied only with double standards; the French rarely go out of their way to make their feelings and thoughts known to any other actor on the world stage (Russia, China, Iran, Saddam's Iraq), and they rarely ask anybody else — certainly not the Yanks — to tell them their (the Americans') true thoughts let alone feel inclined to respect and honor said thoughts in any meaningful manner.) 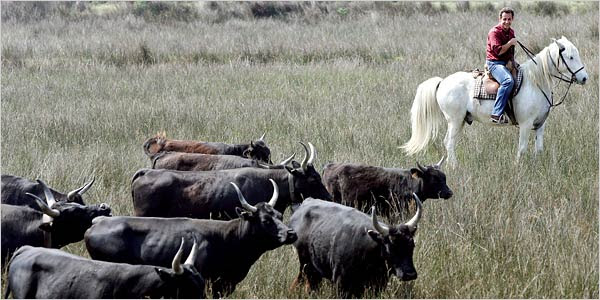