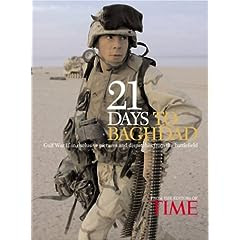 What is striking in French bookstores is not only the overabundance of books lambasting the Iraq war (and Bush, and America's capitalist system, etc…), it is not only the absence of books in favor of same (and the accompanying absence of any kind of balance), it is the virtual absence of even any volume that is matter-of-fact and neutral about the subject.

Nobody expects a bookstore not to have a minimum number of books devoted to the military operations of, say, World War II or to a given campaign. Of course, the Iraq conflict in no way compares with WWII (in fact, that's the point, some defenders of America's current war might reasonably say), but it so happens that American bookstores abound not only with books blasting and praising the Iraq war (and Bush, and American-style capitalism, etc…), U.S. bookstores abound with books detailing the straightforward military operations of the Iraq war and even individual battles, as well as photo-album-type books and DVD documentaries of the three-week conflict (from Time, National Geographic, NBC, etc) — and, of course, soldiers' (and Marines') memoirs of the conflict (or a given battle) — again, positive, negative, or simply straightforward.

But as far as I can tell, none of these have ever been translated into French, nor do many French authors seem to have taken up positive or simply neutral aspects. (Is there not a single Frenchman who is interested in the military operations of the war?!) Of course, if you show details of the Iraq war, it might show a humane(e) side to Yankee soldiers and to the Pentagon's military decisions, and that will make it harder to demonize the Americans or refer to the conflict as the worst tragedy to befall humanity since the Holocaust…

Another French book that is critical of the French attitude towards Saddam Hussein vis-à-vis its attitude towards America during (and before!) the Iraq crisis is being conveniently ignored. As Media Ratings reminds us (merci à Resilience TV),

during and after that conflict, our media joined in a disinformation campaign orchestrated by the Quai d'Orsay [France's foreign ministry] and passed on by consenting French media. This campaign was perfectly described by Alain Hertoghe who, in late 2003, published The War of Outrages: How the Press Disinformed Us on Iraq.

As I write in my book on anti-Americanism, La Croix editor Hertoghe was duly fired, and his book remained ignored by the mainstream media. Now a new book has come out, and Jeanne Assouly's tome (she's from France 2, proving good apples can be found even in the most rancid of barrels) too seems to be in the process of being thoroughly ignored by France's MSM.

And why shouldn't it? After all, Iraq, the Truth: What France Risks From the Saddam Hussein Trial, shows

Do you remember all the times we have been told by French politicians, by French media outlets, by common French citizens, how it is wise in life to remain suspicious and how you should always look for the hidden motive (but how this always turns out to only remain suspicious of the Americans and look only for the Americans' hidden motives — no reason to remain suspicious of the motives of pacifist "peace camp" members such as Russia, China, and Syria)? Do you remember the vicious "documentaries" on the Saddam Hussein trial from Arte? (In fact, do you remember all the scorn, snorts, and scandalization about Fox News, in conjunction with the totally relaxed attitude regarding the state channels that such TV channels as France 2, France 3, and Arte are?)


All starts to make sense… Don't it?